Kurdish parliamentarians rejected the KRG's move to borrow $5 billion from international banks in light of a severe budget deficit, arguing that this would impose a heavy burden on the government itself and on the economy. 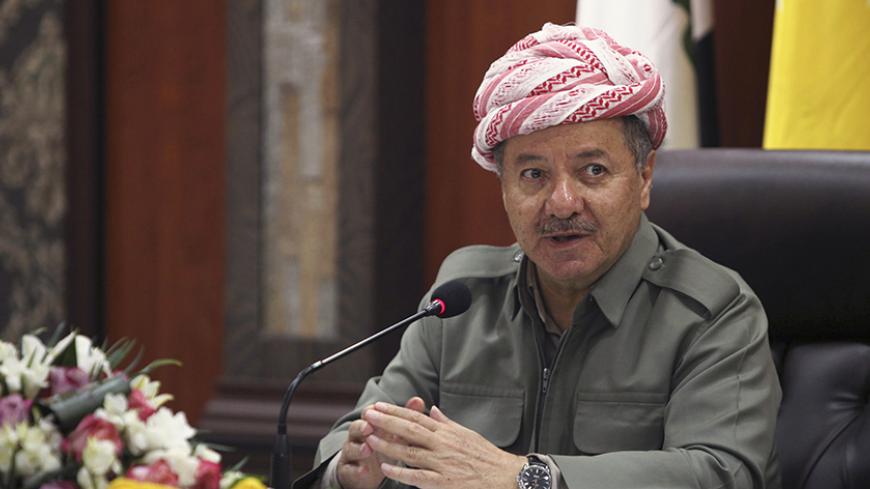 ERBIL, Iraq — Burdened by a severe budget deficit and an ongoing war against the Islamic State (IS) along a frontier of over 1,000 kilometers (621 miles), Iraq's Kurdistan Regional Government (KRG) is seeking to borrow up to $5 billion from private international banks.

The move has sparked an uproar among Kurds, demonstrated by the weak support the move garnered during a parliament session to pass the loan bill.

It only secured 39 votes during the session June 2, attended by only 59 out of the 111 members of parliament. That is one of the lowest approval rates, if not the lowest, of any legislation passed in the Kurdish parliament since its establishment in 1992, a number of members of parliament and officials told Al-Monitor. On June 16, the parliament put to vote four other articles of the law as it had become clear that the legal quorum was not reached for voting on those articles during the June 2 meeting, Izzat Sabir, head of the Finance and Economic Affairs Committee in the Kurdistan parliament, told Al-Monitor.

Islamic blocs that make up around 15% of the seats in the Kurdish legislature unanimously boycotted the voting session largely on the grounds that the interest rate on any foreign loan will make it religiously prohibited.

“We believe the [Kurdish] government has other options such as reducing the waste of public funds, transparent collection of domestic revenues or selling oil and receiving its payment in advance,” Abubaker Haladeni, a parliamentarian from the Kurdistan Islamic Union (KIU) — a party with a Muslim Brotherhood-inspired ideology — told Al-Monitor.

"We believe the KRG does not meet the requirements to receive loans given its administrative and economic system and the weak financial oversight that exists," Haladeni said.

No date has been set yet for when the KRG will receive the loans, as it depends on negotiations with the lending bodies.

Some parliamentarians told Al-Monitor that the KRG has already approached major banking firms, such as US-based Goldman Sachs and German Deutsche Bank.

An official from the Deutsche Bank's regional office in the United Arab Emirates (UAE) declined to comment on the matter "due to internal policies." Al-Monitor's attempts to solicit comments from Goldman Sachs did not bear fruit either.

The bill passed by the Kurdish parliament has to be approved by KRG President Massoud Barzani to legally take effect. After it is submitted to him, the president has 15 days to approve or reject the legislation. Many of those opposed to the measure say they are against the government incurring hefty loan sums that the population will have to pay for.

The government is said to be indebted to various local and international firms as well as some foreign countries, with some members of parliament telling Al-Monitor that the KRG has borrowed from countries such as Turkey and the UAE.

Sabir said that up until early 2015, the KRG had borrowed 8 trillion Iraqi dinars, approximately $6 billion at current exchange rates. He believes that the KRG's borrowing is justified and voted for the recent bill. “It's important to overcome this crisis,” Sabir told Al-Monitor. “The money has to be spent with the knowledge of the parliament for investment and infrastructure projects.” He added that the duration set by parliament for repaying the prospective $5 billion debt will be up to 10 years.

Government officials are hoping that once the money arrives, it will stimulate the economy.

“Investment projects have their own returns. Such projects will cause economic growth and expand business movement, while tax and custom tariffs will increase and this will mean revenues,” Ahmed Khder Aga, spokesman of the KRG's Ministry of Finance, said.

The Kurdish government relies on the federal government in Baghdad for its budget. Iraqi government's coffers have been dealt a heavy blow by the plummeting oil prices since last year. Iraq's Ministry of Oil had announced late last year that the country expected its revenues would be 27% lower than expected in 2014.

The economy of Iraqi Kurdistan has slowed down significantly after the former Iraqi government of Prime Minister Nouri al-Maliki cut the KRG's share of the Iraqi budget in February 2014. The exact cutoff amount is not announced but could be up to several billion given that the KRG was not paid for most of last year. Iraq's 2014 budget stood at $102 billion, of which 17% goes to the KRG after certain sovereign expenses are reduced.

Budget distributions have resumed since late 2014, after Maliki was replaced earlier in the year, but the amount given to the KRG has been well short of its share.

In May 2015, for instance, the KRG received only 508 billion Iraqi dinars (roughly $420 million), less than half the budget amount it was owed by Baghdad.

A major reason behind the minimal support among members of parliament for the KRG's borrowing efforts is due to concerns about corruption, according to those opposing the borrowing move. The government has faced strong criticism over the years for what many see as rampant corruption.

"I rejected the bill and believe this is a game and a money-laundering attempt by the government and some people within it," said Bestun Fayaq, a parliament member from Gorran (Movement of Change), which used to be in the opposition up until last year but now controls the powerful Ministry of Finance.

In an attempt to create transparency and oversight, the ratified bill stipulates that parliament will decide on which projects the future loans will be spent.

Critics such as Fayaq are also concerned about the impact of the “massive” loan the KRG has been discussing. “The government is in a lot of debt already, up to $17 billion. … It will be a heavy burden on the government and people now and in the future, particularly given the interest rates,” Fayaq said.

Amid the debate surrounding the KRG's rising borrowing levels, some believe that for the loans to have a more positive impact on the local economy, it would be better if the lenders were local entities.

“If they borrow from local banks, the interest would go back to Kurdistan's economy … if they are genuinely local banks, not just stationed here,” Anwar Anaid, a political economist and professor at the University of Kurdistan Hewler in Erbil, told Al-Monitor.

He said that the Kurdish economic model is a “confused” one that has inherited elements of the past socialist systems prevalent in Iraq, coupled with “extreme market economy” policies applied in recent years.

“If the loan is for the [current] crisis, then the KRG should borrow as little as possible to repay as quickly as possible and borrow from reputable lenders because that way you establish a credit-worthiness rate … meaning better borrowing conditions in the future,” Anaid said.

If due to lower budget handouts from Baghdad the KRG opts to sell its own oil directly, as it has threatened to do, it might not need to take the loan. KIU and Gorran members of parliament with whom Al-Monitor spoke support this kind of measure instead of borrowing large sums of money.