Turkish women are poorly represented in the workforce, but a new foundation aims to change that. 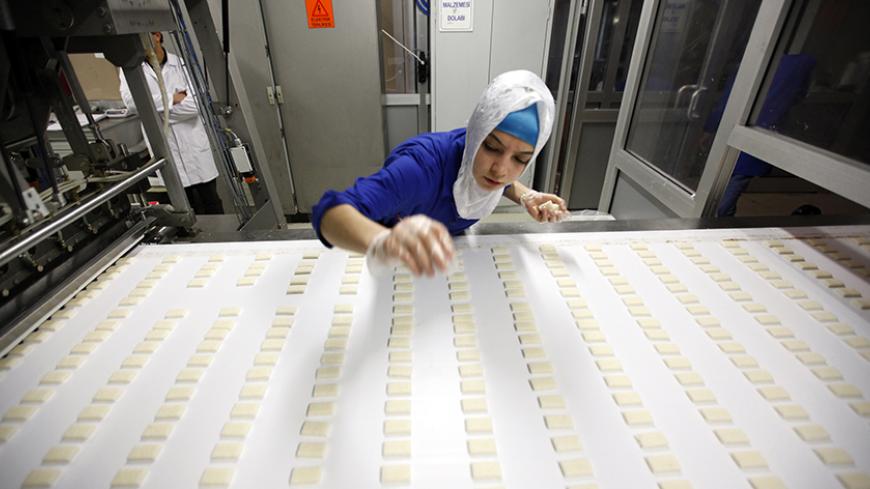 A worker checks the chocolates on a production line at Konya Seker Sugar Factory in Cumra, a small town south of the central Anatolian city of Konya, Jan. 27, 2012. - REUTERS/Umit Bektas

When it comes to the participation of women in Turkey's workforce, the picture is not very encouraging. According to a March 2015 report from the Turkish Statistical Institute, women make up only 30% of Turkey’s labor force. Additionally, in a country where informal work among women is prevalent, many other factors contribute to the gloomy statistics, including gendered division of labor, lack of education and a social security system that does not function in women’s favor.

Furthermore, employers often prevent women from returning to work after having children, thus further preventing them from contributing to Turkey's economy. Unfortunately, testimonies and studies from around the world, including from the United Kingdom and the United States, confirm a similar pattern: Women are being driven from their jobs, as motherhood results in continuous “disadvantages in the workplace in addition to those commonly associated with gender,” as stated by a 2007 American Journal of Sociology article.

Yet, certain commendable efforts have been made toward progress. During her work as a consultant for a Turkish executive search firm, Ayse Guclu Onur met many qualified and experienced women who were frustrated with their lack of choices and support in Turkey. Guclu Onur joined forces with several other female leaders — including several financial and banking experts — and established the YenidenBiz foundation.

According to Didem Altop, one of YenidenBiz's founders and secretary-general of Endeavor Turkey, the organization's name is a play on words. “It literally means 'Us Again' in Turkish, referring to women returning to careers. It also means, 'A New Us,' alluding to changed, evolved and refreshed attitudes and expectations,” Altop told Al-Monitor. Moreover, the “Biz” in YenidenBiz refers to business as an essential focus of the foundation.

When asked about her motivations and the foundation’s vision, Guclu Onur told Al-Monitor, “When women first enter the workforce in Turkey around age 24, the ratio of women in the workforce is around 37%. However, just after they start having children, say, after the age of 25-26 and beyond, this ratio drops to 29%. The primary reason for women not being included in the workforce is that they are attending to their children and other home-related duties — this group accounts for more than 65% of all women not working. Unfortunately, employers tend to frequently de-prioritize women who have been away from actively working for six months or more.”

Kadir Has University's April 2015 study focused on Turkish society's perception of women and gender. The study surveyed 1,000 individuals aged 18 and over in 26 Turkish cities, and confirmed that the drop in the female workforce corresponds to the onset of motherhood. According to the study, for 59.2% of surveyed women and 75.8% of surveyed men, the ideal age for marriage is between the ages of 25-30. Ipek Ilkkaracan explains in her 2012 article “Why so few women in the labor market in Turkey?” that “marriage and motherhood exert a substantial negative impact on women’s labor market engagement.” Ilkkaracan highlighted how the priority given to women's roles as mothers and wives impacts their decisions to not work.

The study found that 66.9% of surveyed individuals believe that men and women do not have the same access to opportunities while looking for a job, though 81.3% of women believe working and equal pay are important. The mission of foundations like YenidenBiz gains even greater importance when taking into account this information.

YenidenBiz's founders have vowed to keep advocating for equality and opportunity in the workforce, bolstered by their belief that women are not only needed in the workforce but that their talents need to be matched for the right position. “Our goal is to build a community around executive women who want to be back in the workforce and to ensure that they feel empowered to do so," Guclu Onur said. "We also want to demonstrate to the corporate world that these women are as employable as others and that they also have a stake in making this happen.”

Operating by the motto “the right person for the right job,” YenidenBiz has already attracted 55 volunteers and has 200 CVs of women looking for work currently in hand. Guclu Onur explained how the foundation reaches out to women. “We have a group of human resources ambassadors who work on a pro bono basis for us," she said. "The first goal is to get to know the person better, given that she meets our criteria (10 or more years of work experience, university graduate, has been away from work for at least one year). We then conduct a competency-based interview to assess their competencies and readiness to go back [to work]. Depending on our findings, we may direct them to certain employers and/or direct them to our training, mentoring and coaching programs.”

Over the last six months, the group has successfully placed about 30 women in jobs. Guclu Onur describes the responses of companies as positive in general. “We have prioritized those companies that we know are more diverse and especially women-friendly to go to," she said. "We have already gotten some international companies such as Coca Cola on board to support us. Big locals such as Yildiz Group (Ulker) and Fiba Group are also behind us. The challenge will be to expand this support to a larger group of companies.”

YenidenBiz strives for greater inclusion of women in the workforce through matching experienced candidates with companies that could benefit from the skills and knowledge of female employees. The foundation also seeks to spread in Turkey what its founders describe as alternative work models.

As Melek Pulatkonak, one of the foundation's founders, puts it: “The Turkish Women’s International Network is a sisterhood network for change to empower and inspire women. We, the co-founders of YenidenBiz, have joined forces to create a channel for women to get back to work. YenidenBiz is a sisterhood story for change. We just got started.”