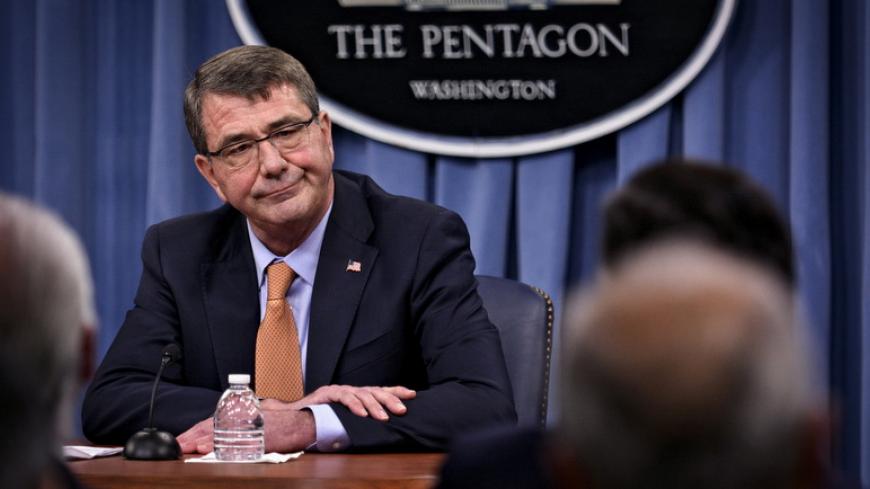 US Secretary of Defense Ashton Carter and Chairman of the Joint Chiefs Gen. Martin Dempsey (not pictured) speak to reporters at the Pentagon in Washington, April 16, 2015. - REUTERS/James Lawler Duggan

US Secretary of Defense Ashton Carter told the Senate Appropriations Subcommittee on Defense on May 6 that a no-fly zone in Syria is “a difficult thing to contemplate” and described the establishment and enforcement of “safe zones” as “a major combat mission.”

Meanwhile, Syrian President Bashar al-Assad acknowledged on May 6 “setbacks” against opposition forces and terrorist groups. In recent weeks, an alliance of Islamist groups, including the al-Qaeda-affiliated Jabhat al-Nusra, Ahrar al-Sham and Jund al-Aqsa, defeated Syrian government troops in and around Idlib, as Reuters reported.

Fehim Tastekin reports that these advances may be linked to an agreement between Turkey and Saudi Arabia earlier this year: “It is no secret that Turkey has built momentum with the Saudis if not to enter Syria now, then to galvanize a proxy war that in the long term could be even more perilous. After meetings with Saudi King Salman bin Abdul-Aziz Al Saud during a visit to Riyadh Feb. 28-March 2, [Recep Tayyip] Erdogan had told journalists that they had agreed to boost support to the Syrian opposition to allow them to produce results. The agreement stipulated that in return for Turkey’s support of the Saudi operation against Yemen, the two countries would join forces against the Syrian regime and form a bloc to counter Iranian influence in the region. Given the Saudi-Turkish agreement, the surge in activity along the Turkish-Syrian border cannot be a coincidence."

The increased militarization of the Syria war may cheer up those who back a regional sectarian agenda and believe that the toppling of the Assad government is somehow instrumental to the long-term defeat of the Islamic State (IS) and al-Qaeda. This line of reasoning does not address the consequences or lessons learned of the military interventions in Libya and Iraq, and similarly avoids first-order questions such as “what comes next” and which countries will provide a post-conflict stabilization force in Syria, if or when the Syria government falls.

The miserable and desperate situation in Syria, meanwhile, gets worse. US diplomats last week accused the Syrian government of continued use of chlorine and barrel bombs against Syrian civilians. Zainab Bangura, the special representative of the UN secretary-general on sexual violence in conflict, said last week, “[IS has] institutionalized sexual violence and the brutalization of women as a central aspect of their ideology and operations, using it as a tactic of terrorism to advance their key strategic objectives.” She added, “Girls are literally being stripped naked and examined in slave bazaars.”

Observing that “the situation on the ground has become all the more grave,” UN Special Envoy on Syria Staffan de Mistura on May 5 launched a new round of negotiations toward a political solution in Syria involving “over 40 Syrian groups, obviously in addition to the Government of Syria, entities, individuals and about 20 regional and international actors, including the neighboring countries and of course members of the P5 of the Security Council.”

De Mistura acknowledged that the talks held in Russia earlier this year “helpfully refocused attention on the political track,” and that while he was not able to achieve a “freeze” in the conflict in Aleppo, that offer is “still on the table.” He added, "We remain alert to any opportunity to reduce violence.”

This column has consistently backed the efforts of de Mistura and his predecessors with eyes wide open about the prospects for success. There are no easy answers in Syria, but any actions that intensify the fighting and bloodshed absent a political track only deepen the crisis. At least de Mistura is giving priority to a halt to the bloodshed and a political process.

“Guns will fall silent one day — it is inevitable, as has been seen in countless other conflicts. The sooner they fall silent, the more lives will be saved,” he said.

Oman opts out of Saudi campaign in Yemen

Saudi Arabia this week intensified its attacks on Yemen in advance of a cease-fire to allow some humanitarian relief for the besieged country.

Maysaa Shuja al-Deen writes from Yemen: “Saudi Arabia is looking for a way to get out of the military impasse, while Iran is seeking to use the political situation to its advantage. Meanwhile, a political settlement remains hard to reach in Yemen, as the state institutions collapsed and social conditions have deteriorated as a result of the civil war.”

Madawi al-Rasheed argues that Saudi Arabia’s best option is to make the temporary halt to the fighting a permanent cease-fire: “An ill-defined war, hastily announced and from the day of its inception shrouded in ambiguous motives, is bound to become a prolonged military engagement. The Saudis risk becoming entrenched indefinitely in an adventure that neither helps battered Yemeni citizens nor scores undisputed victory for a leadership that is navigating a difficult terrain. The only way out of this awkward and dangerous situation is for the proposed five-day suspension of military action to become permanent, giving way to negotiation and compromise. This would allow Saudi Arabia to claim a different kind of victory rather than the one the Saudi leadership hopes for and ensure that the Saudis save face. But it is doubtful that the Yemenis will ever forget the devastation caused by the airstrikes of their neighbor, who has interfered enough in their internal wars.”

Meanwhile, Oman has opted out of the Saudi offensive. Giorgio Cafiero writes: “As the one GCC [Gulf Cooperation Council] state that shares the Strait of Hormuz with Iran, Oman has a vested interest in cooling the tensions between the Islamic Republic and the Persian Gulf’s Arab sheikhdoms. Muscat is also heavily invested in finalizing a deal between the P5+1 and Tehran to decrease the risk of a military confrontation over Iran's nuclear enrichment program — a conflict that would inevitably threaten Oman’s vital economic and security interests. From Oman’s perspective, the escalation of violence in Yemen could ignite a wider regional conflict that threatens both of these prerogatives.”

Julian Pecquet broke the story April 27 about the controversy over draft language in this year’s National Defense Authorization Act that Iraqi Kurdish and Sunni forces would be “deemed a country” to “allow these security forces to directly receive assistance from the United States.”

The draft sparked an intense backlash in Iraq and became a focus of meetings that Iraqi Kurdistan President Massoud Barzani held last week in Washington with US President Barack Obama, senior US government officials, congressional leaders and experts. A May 6 White House statement, following Vice President Joe Biden’s meeting with Barzani, made clear that direct arms transfers to Iraqi Kurdish forces was not under consideration.

Barzani said later that day, "Both the vice president and the president want the peshmerga to get the right weapons and ammunition. … The important point here is that the peshmerga get weapons. How they will come, in which way, that’s not as important as the fact that peshmerga need weapons to be in their hands."