Saudi King Salman's unprecedented personnel changes and other moves have many wondering what might come next from the House of Saud. 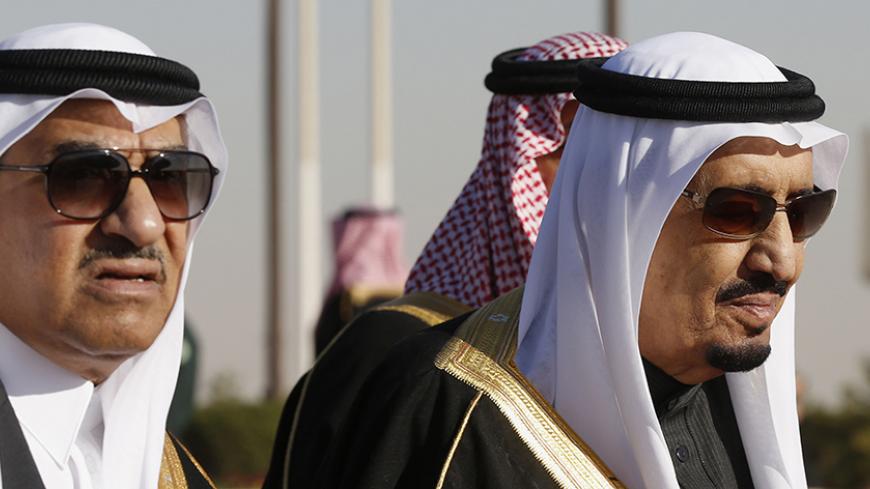 King Salman bin Abdul-Aziz Al Saud's unprecedented changes in the Saudi line of succession that benefit his son is raising questions about what might come next in the royal family. A traditional and conservative institution, the House of Saud has seen more personnel changes in the last 100 days than at any previous time. These shifts come as Salman pursues the most assertive foreign policy in recent Saudi history, projecting military power as no king has tried since the 1930s.

Without warning, Salman removed the sitting crown prince, Muqrin, his half brother, and promoted the third in line, Prince Mohammed bin Nayef, his nephew, to No. 2. Salman made his own son, Mohammed bin Salman, the new No. 3 despite a lack of experience as a senior policymaker. Muqrin has since publicly proclaimed his allegiance to the new team, but without providing any explanation for his removal.

The king also replaced the ailing foreign minister, Prince Saud Al-Faisal, with a non-royal, Adel al-Jubeir, the serving ambassador to Washington. Prince Saud, foreign minister since 1975, wanted out. Jubeir has been the public spokesman in the United States for the Yemeni intervention. His expertise is his knowledge of how US politics and Washington's bureaucracy work.

Among the other changes Salman made April 29 was the ouster of the only woman to ever hold a sub-cabinet position. Deputy Education Minister for Girls Nura al-Fayez had been appointed by King Abdullah in 2009. She advocated girls physical education, which Wahhabi zealots strongly opposed. Salman also gave the entire military and security forces a bonus of one-month's pay, their second since he ascended the throne in January. He approved a restructuring of the oil industry May 1, separating the Oil Ministry from ARAMCO, the state-owned oil company. Mohammed bin Salman proposed the change, which comes amid low oil prices, an increasingly expensive war and huge bonuses.

What happened with Muqrin is a key question. As the son of a Yemeni slave girl, he was always a bit of a black sheep in the family, but his competence was never in question. According to the royal palace, Muqrin had asked to be replaced, but no reason was given. No crown prince has ever relinquished the position in the history of the modern kingdom, which was founded in 1902. When Salman took the throne, the press trumpeted Muqrin as his heir, and there were no signs that he was less than eager to be the next in line. Posters showed Salman, Muqrin and Nayef smiling, a happy triumvirate poised to rule the kingdom for decades to come.

Speculation surrounding Muqrin's departure will be intense. He was a protege of the late Abdullah. He is not close to Salman's branch of the family, the Sudairis, who share the same mother, Hassa bint Ahmad al-Sudairi, the favorite wife of the kingdom's founder. Perhaps Muqrin was worried that cautious reforms would end under Salman or that the war in Yemen is becoming a quagmire.

Another question concerns Abdullah's son Prince Mitab, who for now has kept his powerful position as commander of the Saudi National Guard. The National Guard is the family's Praetorian Guard; it defends the capital, the holy mosques in Mecca and Medina and the oil industry. National Guard troops have occupied Bahrain, the kingdom's tiny island neighbor, since the Arab Spring in 2011 to keep a minority Sunni monarchy in power. Two of Mitab's brothers have been eased out of their jobs as governors of key provinces this year — Prince Mishaal from Mecca and Prince Turki in Riyadh. Both were considered reformers and innovators. Will Mitab remain?

How secure is the new crown prince? Mohammed bin Nayef, 55, is famous for defeating al-Qaeda's violent attempt to overthrow the House of Saud a decade ago. He led a four-year counterterrorism campaign that decimated al-Qaeda in the kingdom and drove its remnants into Yemen. During the course of his remote-control duel with Osama bin Laden, Mohammed bin Nayef survived at least four assassination plots.

His father, the late Crown Prince Nayef, was so reactionary he was nicknamed the Black Prince. Is his son any different? Mohammed bin Nayef studied in Oregon and with the FBI and Scotland Yard before joining the Interior Ministry. He also holds the position of chairman of the kingdom's security and political committee, which coordinates security issues. Human rights activists are critical of his role as the nation's top policeman, while security experts laud his counterterrorism record. He has two daughters, but no sons, and thus no candidates for succession.

What about the young up and comer, Mohammed bin Salman, the bearded face of the Yemeni war? Popular songs have been airing since February touting his decisiveness and leadership. He became defense minister in January and has been a constant on Saudi TV, appearing to direct the war effort and meeting with foreign leaders to win support for the campaign against the pro-Iranian Shiite Houthi rebels. He has not convinced many to send troops. Mohammed bin Salman is considered ruthlessly ambitious and very close to his father. He has given up his position as chief of the royal court, but he will undoubtedly keep control of access to the king.

Not only does he lack experience, but unlike most Saudi princes, Mohammed bin Salman was not educated in the West. Instead, he studied law at King Saud University. There is controversy over his age, reputed to be anywhere from 29 to 34; officially his birthday is July 24, 1980. He chairs a number of young people's organizations and seeks to portray himself as the leader of the next generation of Saudis. Two-thirds of Saudis are under 30. He also chairs the powerful development and economics committee, which coordinates economic policies, including oil pricing and supply.

These changes are profound shifts in power between generations in a society that honors age and experience. In promoting his nephew and son, King Salman is passing the torch to the next two generations of royals. Since 1902, Saudi Arabia has been ruled by the founder of the modern kingdom, Ibn Saud Abdul-Aziz, or his sons. Salman will be the last son to reign.

The royal court says all the changes have been endorsed by a majority in the Allegiance Council, the committee of Ibn Saud's sons and grandsons, but the legitimacy of who selects the next generation and on what criteria has been a question mark over the succession process for years. The king hopes this is now all settled, but has he in his own mind set the future lineup? How much is he building consensus among the family for his rapid changes? Many wonder about the king's health and how that might affect his decision-making.

Meanwhile, the kingdom has arrested scores of people allegedly linked to the Islamic State, including some planning to attack the US Embassy. The Saudis are unconvinced that the United States has a viable strategy in Iraq that will not leave Tehran the dominant power there, but they do not think Washington has a strategy in Syria.

Most of all, they worry about their own war in Yemen. Never has the kingdom been so aggressive with its own military in trying to force a regime change. The Yemeni war is part Saudi-Iranian regional rivalry, part unfinished Arab Spring business and part Sunni-Shiite sectarian animosity. It is now, above all, Salman's war, as well as his son's. The surprise elevation of Mohammed bin Nayef and Mohammed bin Salman underscores how the stakes in this war are crucial not only to Yemen's future, but also increasingly to the future of the House of Saud. The hawks need to produce tangible results or face losing credibility.

An absolute monarchy gives the king complete control to decide all issues, from war and peace to succession and justice. Saudi Arabia has a long history of consensus-building incrementalism that reduces uncertainty to a minimum. Salman's rule so far has been a striking departure from that past. In a system that has treasured order and predictability, the new Custodian of the Two Holy Mosques has introduced uncertainty and surprise.