Why Pakistan said no to King Salman

Pakistan's unanimous decision to stay out of the conflict brewing in Yemen, and to push for a political resolution rather than a military one, puts significant strain on bilateral relations, complicating Saudi-Pakistani diplomatic relations. 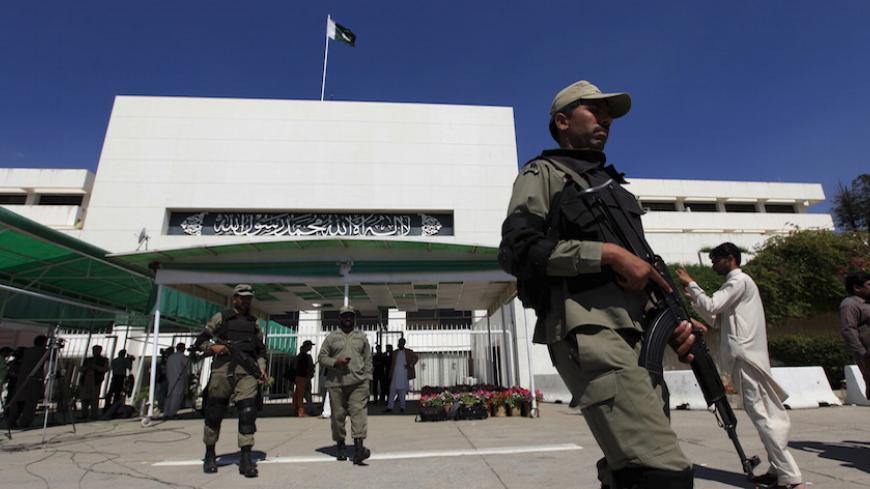 Saudi Arabia's request for tangible Pakistani help for Operation Decisive Storm in Yemen has led to an unprecedented rejection by Islamabad. In response to a direct face-to-face request from King Salman bin Abdul-Aziz Al Saud for ground troops and aircraft for the war against Zaydi Shiite Houthi rebels in Yemen last month, Prime Minister Nawaz Sharif took the issue to the Pakistani parliament, which on April 10 unanimously decided to stay out of the war. On April 13, Sharif reaffirmed the parliament's decision while also pledging Pakistan's commitment to Saudi Arabia.

After five days of debate, not one speaker apparently supported sending ground troops. While many praised Saudi Arabia as a friend of Pakistan, almost all called for a political solution and diplomacy to end the crisis. Some even blamed Riyadh for starting the war. Every political party opposed sending troops. The consensus was to stay neutral while reaffirming friendship with the kingdom.

Iranian Foreign Minister Mohammad Javad Zarif visited Pakistan during the debate. He met with both Prime Minister Sharif and Chief of Army Staff Raheel Sharif. The army has argued that it is stretched too thin with a counterterrorism campaign against the Pakistani Taliban and tensions with India to send troops to Yemen. Sharif said April 13 that he urged Zarif to rein in the Houthis and support a political solution.

The Pakistani response is a potentially big setback for the bilateral relationship. Given that Sharif owes his life to the Saudis, who helped save him from execution after the 1999 Gen. Pervez Musharraf coup and provided him exile (with a little help from Washington), it's a remarkable development. No Pakistani politician knows the Saudis better than Sharif or has more access to their inner circle.

Why did Sharif send the issue to parliament? A revealing editorial in the Pakistani press suggests the prime minister had already concluded that the Saudis have blundered into a war they cannot win and for which they are unprepared. Their goals, restoring the Hadi government to power and preventing the creation of a pro-Iranian regime on the Arabian Peninsula, are not matched by the resources available. Sharif met with the king and his advisers on the eve of the war and judged they "had made a strategic error led by an untested leadership that panicked" at Iran's role in Yemen.

In this account of Sharif's decision, the Pakistani leader reportedly believes that if the Saudis enter into a ground war in Yemen — with or without Pakistani forces — it will become a quagmire. They have simply "bitten off more than they can chew." The Egyptian experience in Yemen, in which Egypt had up to 20,000 casualties in the 1960s fighting the same Zaydi tribes that back the Houthis, figures prominently in Pakistani thinking, especially in the army.

But Sharif also does not want to endanger Pakistan's close ties to the kingdom. He will note that strong military and diplomatic relations will continue between Riyadh and Islamabad. Pakistani experts and advisers are already in the kingdom in small numbers. One died in a training accident in Saudi Arabia last week.

Sharif will also argue that he had no choice but to consult the parliament. Once a consensus emerged, he also could not go against it.

The episode also has implications for the long-standing issue of whether Pakistan and Saudi Arabia have a secret unwritten agreement for Islamabad to provide a nuclear weapon or several weapons to Riyadh if the kingdom felt threatened by an Iranian bomb. The Yemen crisis suggests any such vague nuclear "promise" may be worthless. If Islamabad won't deliver conventional ground and air support when the kingdom is at war with an Iranian proxy (the Saudi view of the Houthis), it can't be relied on to provide a bomb.

The episode also raises concerns about Iran's clout in the region. Much of the debate in parliament had been about avoiding further sectarian violence in Pakistan (which is 20% Shiite), which intervention in the war in Yemen would stoke (perhaps with Iranian help). Zarif had a big stick behind his back. Without ever mentioning the threat of Iranian meddling in Pakistan's already fragile domestic stability, Zarif could remind his hosts they don't want more trouble at home.

Zarif visited Pakistan after a stop in Oman, the other big no-show in the Yemen war. Oman is the only GCC state to stay out of the air war. Like Sharif, Sultan Qaboos is wary of the Yemen conflict expanding beyond Yemen's borders. Just west of Oman's Dhofar province both Houthi and al-Qaeda fighters have expanded their control since Operation Decisive Storm began. The Houthis seized Shabwa province last week and al-Qaeda in the Arabian Peninsula has taken much of Hadrawmawt province. The sultan is also wary of a quagmire that only benefits al-Qaeda.

There is now talk in Islamabad of Pakistan playing a mediator role to find a way to end the fighting. As a major Islamic power, Pakistan could potentially help engineer a face-saving solution to achieve a cease-fire and end the war. But that requires a willingness to compromise that as yet does not look apparent either in Riyadh or Sanaa.