The new Turkish Cypriot president, Mustafa Akinci, infuriated Turkish President Recep Tayyip Erdogan as soon as he was elected by calling for a dignified relationship between Turkish Cypriots and Ankara. 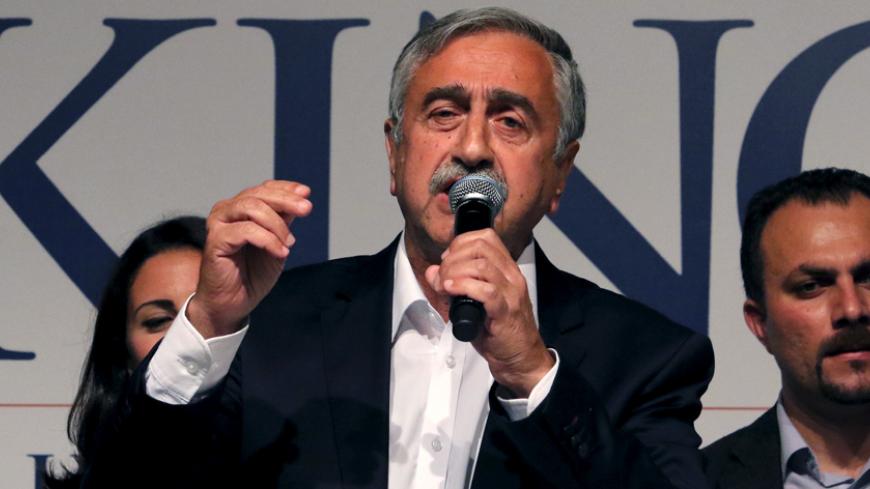 In the April 26 presidential elections, Turkish Cypriots delivered a strong message in favor of a solution for the long-divided island, handing victory to leftist candidate Mustafa Akinci, who beat outgoing President Dervis Eroglu, a rightist nationalist concordant with Turkey’s traditional policies. The outcome reflects a strong popular will for reunification, but raises the spectre of trouble in relations with Turkey.

“We’ll be neither confrontational nor submissive,” Akinci asserted April 27, drawing Turkish President Recep Tayyip Erdogan’s ire. Akinci was speaking live on CNN Turk television when the station interrupted the interview and switched to a press conference for Erdogan ahead of his departure to Kuwait. Asked about Akinci’s call for a “relationship between brothers,” Erdogan retorted in strong language.

“Mr. President’s ears should hear what comes out of his mouth. Working together even as brothers has its prerequisites. This country has paid a price for Northern Cyprus. We’ve sacrificed martyrs and we are continuing to pay a price. We spend about $1 billion for them annually,” Erdogan said. “Who is waging the battle for Northern Cyprus in the international arena? Can Mr. Akinci wage this battle on his own? [Turkey] will continue to see [the TRNC] just like a mother sees her baby.”

CNN Turk then resumed its interview with Akinci, who stood behind his words, saying, “I have difficulties understanding this annoyance. Doesn’t Turkey want the baby to grow up? I stand behind what I said.”

He added, “I have not only ears to hear but also a moral compass to feel with. I speak both from my heart and my brain. I didn’t say anything about estranging Turkey. On the contrary, I spoke of a healthy relationship.” Akinci then excused himself, saying that Erdogan was calling him on the phone.

A decade ago, Erdogan had explicitly backed opposition leader Mehmet Ali Talat from the pro-settlement Republican Turkish Party, both in the 2004 referendum on the failed Annan Plan and in the 2005 presidential elections. Today, it’s hard to say that Erdogan is reconciled with the pro-settlement forces in the TRNC. His remarks in favor of a settlement are now accompanied with “buts.” Amid the deadlock in Turkey’s European Union accession process, he has returned to Turkey’s old nationalist impulse on the Cyprus issue, taking a collision course with Turkish Cypriot forces, who advocate a federal solution with the Greek Cypriots.

In one memorable 2011 episode, Erdogan, irked by an anti-Turkey banner at a demonstration in the TRNC, accused Turkish Cypriots of ingratitude. “It’s thought-provoking that those who are being fed by us should be doing this,” he said, using a derogatory Turkish word for “foster child.” He put pressure on Eroglu to sue the protesters with the critical banner. Then, further fueling the spat, he grumbled that Turkish Cypriots get higher salaries than people in Turkey, claiming, “The lowest public servant salary there is 10,000 Turkish lira,” or about $4,800 at the time.

Erdogan has another problem with Akinci: The new Turkish Cypriot leader has been the most vocal critic of Turkish military commanders, ambassadors or special envoys bossing the TRNC about. He has long called for a “dignified relationship” with Turkey and bilateral ties “based on the principle of equality,” criticizing the “baby motherland” treatment of the TRNC. Those messages won him 60.5% of the vote in the elections.

Apprehension over Ankara’s policies is not limited to leftist quarters in the TRNC. Right-wingers, too, have grown increasingly unhappy that Turkey imposes its will on Turkish Cypriots just because it paid a heavy price in its 1974 military intervention, meddling in all economic and political issues. Ankara’s payment of public sector salaries has created a vicious cycle impeding the development of the local economy, and the Turkish troops’ presence on the island has grown into a problem.

At the 2004 referendum, Turkish Cypriots voted overwhelmingly in favor of reunification, but still the Greek Cypriots joined the EU unilaterally and the union failed to keep its promises to the Turkish Cypriots. The popular sense of frustration resulted in the rise of the center-right National Union Party, whose candidate, Dervis Eroglu, won the presidential polls in 2010.

The latest elections, however, marked a return to the pre-2004 spirit. In the first round on April 19, Eroglu got 28.15% of the vote, while Akinci — backed by the Communal Democracy Party and the United Cyprus Party — mustered 26.94%. In the second round, Akinci got also the Republican Turkish Party’s support and clinched a convincing victory.

The chill between Akinci and Erdogan dates back to 2003, when the two exchanged barbs at a conference in Majorca, Spain. Taking the floor after Erdogan, Akinci warned that the 2003 elections in the TRNC had to be free so that the Turkish Cypriots could have the chance to join the EU together with the Greek Cypriots in the December 2014 referendum.

“The elections are under threat. [The TRNC’s first president] Rauf Denktash and his supporters keep bringing in people from Turkey, giving them citizenship to change the electoral base. By doing this, they are interfering with our will,” Akinci said. Addressing Erdogan, he added, “Mr. Prime Minister, I’m calling on you to stop this interference. If not, the Turkish Cypriots’ future as well as Turkey’s future in the EU will be under threat.”

An angry Erdogan retorted, “We are doing what Greece does during elections in Southern Cyprus. We are not sending any people. This allegation is untrue, and I also find it to be ugly.”

The two men have been at odds ever since, and Erdogan now appears poised for an uneasy relationship with the new TRNC administration.

In contrast to the tensions with Ankara, optimism is high among Turkish Cypriots that the peace process with the Greek Cypriots will now move forward, having stagnated during Eroglu’s term. The climate on the island has changed in favor of a solution as the Greek Cypriots, who voted down the Annan Plan in 2004, face growing economic woes, with the EU no longer a source of great optimism, and Turkey stands a chance of becoming the route of natural gas shipments from Eastern Mediterranean reserves. Moreover, Akinci’s interlocutor at the negotiating table will be Nicos Anastasiades, who backed the Annan Plan. With two proponents of the plan at the helm on the two sides of the island, things could become easier.

No doubt, progress will also depend on the attitudes of the two guarantor states, Turkey and Greece, and their bilateral relations. There is no evidence, however, to suggest that Turkish-Greek ties today are better off than before. Furthermore, the EU and the United States will have to be involved in the process in unison with Turkey to facilitate the talks, providing a driving force and encouragement. Yet, Turkey’s relations with both the EU and the United States are going through one of their lowest periods.

In remarks to Al-Monitor, Turkish Cypriot academic Muhittin Tolga Ozsaglam played down the prospects of Turkey cutting financial aid for the TRNC as a punishment for Akinci, suggesting that Erdogan’s rhetoric on Cyprus was aimed at wooing nationalist voters ahead of Turkey’s June 7 parliamentary elections.

“I don’t think there will be any sanctions because of Akinci. In terms of belt-tightening measures, certain programs are already in place in the TRNC. Though these programs have some positive aspects, their social impact has been mostly negative,” Ozsaglam said.

Asked about how the peace process could proceed under Akinci, he said, “Akinci is an important political figure and a federalist. Both Akinci and Anastasiades had said ‘yes’ to the Annan Plan. Akinci has more international credibility than Eroglu. Thus, optimism has been on the rise, but the peace process is not something easy anyway.”

According to Ozsaglam, Akinci is likely to prioritize confidence-building measures to facilitate the peace process and could initiate steps to bring the two Cypriot communities closer. Reopening the sealed-off “ghost town” of Varosha to settlement was one of Akinci’s electoral pledges. Such steps could deprive the Greek Cypriots of the comfortable argument that the Turkish Cypriot leadership is opposed to a settlement and move them to a more constructive path ahead of a potential new referendum in 2016.