Turkey’s Circassians in uproar over alphabet

Turkey’s largest Circassian organization is infuriated by a government decision to introduce the Latin alphabet in Circassian language courses in public schools, alongside the Cyrillic one. 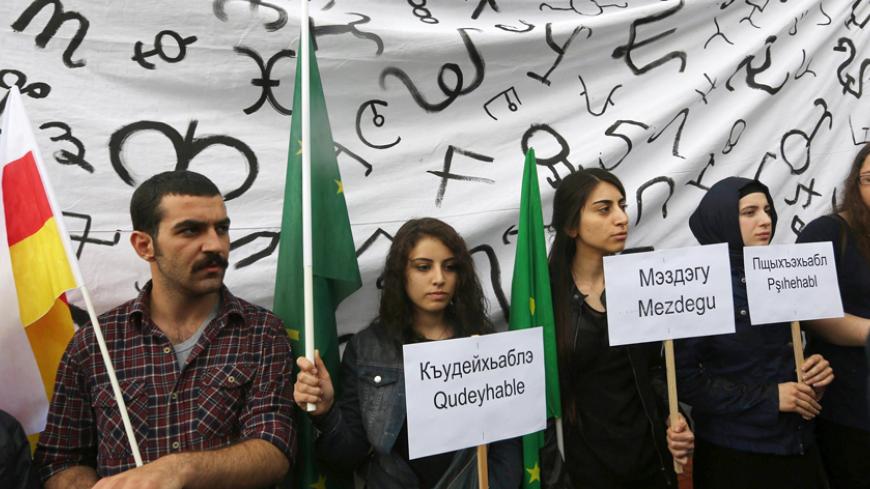 Turkey’s ethnic Circassians, the descendants of Caucasian communities expelled from their homeland by Russians in the 19th century, had hardly overcome the shock of being ignored in the Justice and Development Party’s (AKP) tickets for the June 7 elections when they found themselves embroiled in another spat with the government. The issue this time is the Circassian language courses offered in public schools.

The Circassian language, known also as Adyghe, has been taught as a selective course over the past three years under a curriculum designed on the basis of the Cyrillic script. The Ministry of Education, however, has now approved the use also of the Latin alphabet, drawing angry reactions from the Federation of Caucasian Associations (KAFFED), the largest civic organization of Turkey’s Circassians that brings together 53 groups. On April 16, KAFFED members held demonstrations at Ministry of Education offices across the country.

Street protests come as a rare reaction by a community that has held senior bureaucratic posts since Ottoman times, seeking to resolve its problems quietly in the corridors of power. True, Circassians have taken to the streets since the 1990s to condemn the wars in Chechnya, Abkhazia and South Ossetia and commemorate the anniversaries of the May 21, 1864, Circassian genocide. But street action to raise demands from the state is something new for the Circassians, who number more than 3 million in Turkey. Demonstrators held banners that read, "Hands off my alphabet," "Our mother tongue should be taught in its official alphabet," "We want our mother tongue alphabet" and "What about Arabic in Latin letters?"

Bonds with the homeland under threat

The main objections of KAFFED members include the following arguments:

One factor that contributed partially to KAFFED’s spat with the government is the in-house rift between conservative right-leaning Circassians and those on the left. The long-standing dispute over whether Circassians should use the Cyrillic, Arab or Latin scripts was rekindled in 2012 as soon as the Circassian (Adyghe) language was introduced as a selective course in Turkish schools. KAFFED, known to maintain the strongest bonds with the homeland, favored the Cyrillic alphabet, while the Konya-based Adyghe Language Teaching Association (ADDER), which focuses specifically on the language issue, emerged as a proponent of the Latin script. The two groups organized conferences in a bid to come up with a common stance.

Eventually, the Ministry of Education launched the Circassian courses with textbooks using the Cyrillic alphabet under KAFFED’s guidance and in line with the curricula in the Circassian homeland. Yet, three years later, ADDER — backed by newly founded pro-AKP Circassian groups — managed to lobby the Ministry of Education to approve a Latin alphabet. KAFFED now says it will seek the cancellation of the decision on the grounds that a dual alphabet will create confusion.

The issue may well have linguistic aspects, but ideological and political convictions also play a role in the dispute. While ADDER represents mostly conservative and right-leaning Circassians, KAFFED is backed by leftist circles. In the ADDER camp, the prevailing sentiment is one of score-settling with Russia, blamed for the wars, deportations and tragedies that befell the Circassians. The KAFFED camp, for its part, tends to avoid anti-Russian rhetoric, seeking to strengthen bonds with the homeland. Due to ideological affinities, ADDER’s rhetoric resonates with the AKP government. According to KAFFED, ADDER managed to convince the ministry to approve the Latin alphabet, arguing that the existing Cyrillic alphabet was essentially a Russian one and has to be replaced with the Latin script so as to shrug off "Russian hegemony." This argument is embraced in the nationalist and conservative segments of the Circassian community, where skepticism and even animosity toward Russia is strong.

In remarks to Al-Monitor, writer and translator Murat Papsu, one of the commission members who drew up the existing KAFFED-backed curriculum, argued that the Latin-based alphabet and curriculum were linguistically flawed and stressed that ideological factors were at play.

He stressed that the approval of a second curriculum in addition to the existing one had created confusion, with the Ministry of Education failing to explain how the dual system would function. The ministry keeps silent in the dispute, while ADDER rejects KAFFED’s objections and sticks to its own arguments, which include the following points:

In sum, a century-old dispute has opened a rift both between the Circassians themselves and between the community and Ankara. Work on a Circassian (Adyghe) alphabet began in the 19th century, but remained limited and inadequate. The alphabet took shape on the basis of two main dialects, the Western and Eastern ones, with their centers in the autonomous republics of Adyghe and Kabardino-Balkaria, respectively.

Following the collapse of Tsarist Russia, both the Arabic and Latin alphabets were used in Caucasia for about a decade after 1918. The Cyrillic alphabet was introduced in the 1936-38 period as the Soviet Union launched a project to equip all local languages with an alphabet. The real development of Circassian literature occurred with the Cyrillic alphabet.

The main problem of Turkey’s Circassians, however, is the accelerating extinction of their mother tongue. The selective courses offered by the Ministry of Education cannot stop the death of the language in their current form. Using the Cyrillic or Latin script will not make a difference as long as the teaching system lacks any serious sense of purpose.