Jordan focuses on IS fight while Gulf allies pull back

Jordan's King Abdullah expresses strong differences from many of his allies on how best to deal with the Islamic State, fighting regional terrorism, developments in Syria and US Middle East policy. 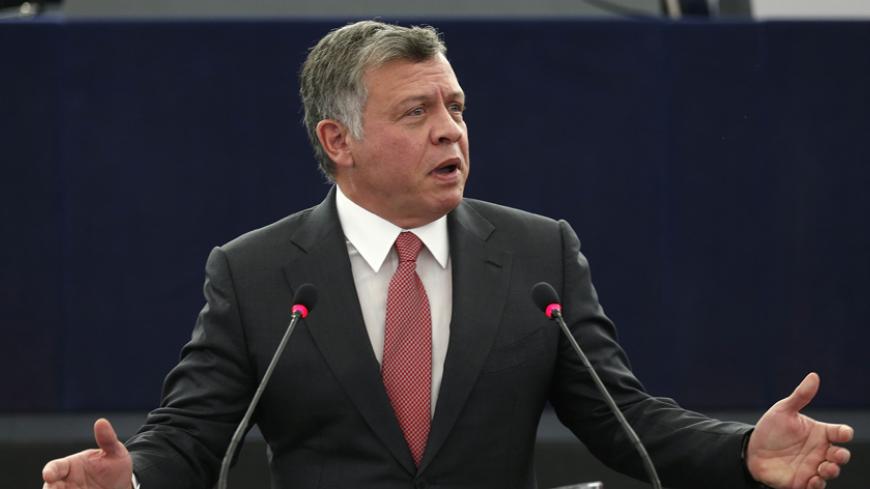 Jordan’s King Abdullah has reiterated his commitment to confront Islamist extremists, or “outlaws,” as he calls them, while maintaining his country’s leading role in the fight against Islamic State (IS) militants in Syria and Iraq. But observers in Amman believe the king is worried about cracks in the US-led coalition against the terrorist group.

In his interview with Fox News on April 13, Abdullah disclosed that Jordan is now the only Arab country left in that coalition, after the Unitd Arab Emirates and Bahrain withdrew their fighter jets in the wake of the Saudi-led airstrikes on Yemen, which began March 26.

Political columnist Fahd al-Khitan told Al-Monitor that despite the loss of Arab participation in the coalition against IS militants, the king believes that this war takes precedence over any other regional issue. Indeed, the Jordanian monarch insisted in his Fox News interview that this “is our war” and that “as the Iraqis and the coalition increase their tempo for the next operation in Iraq, so will Jordan increase its tempo inside of Iraq.”

Jordan has joined the air campaign in Yemen, but its role has been symbolic. The king, an ally of Saudi Arabia, said that eventually, there must be a political solution to the crisis in Yemen. It was the first time that he spoke publicly about his personal stand on the Yemen issue since he departed unexpectedly from the Arab League summit in Sharm el-Sheikh on March 28. Observers believe that Abdullah was not happy with the summit’s agenda, which shifted the focus off the war on IS in Iraq and Syria to the air campaign against the Houthis in Yemen.

Khitan said it's clear that Jordan’s views on fighting IS, the war in Yemen and relations with Iran differ from that of its traditional Gulf allies and even the United States. He added that Jordan is “managing those differences without losing the backing of its allies.” In the interview King Abdullah said, “As a result of the Arab Spring, Arab countries have realized [the] need to stand more on our own two feet, and take our own decisions and be more bullish and straightforward about it.” He added, “At the end of the day, I think I know what’s best for the country and for the region.”

On the Iran nuclear issue, the king appeared to differ with the policy of US President Barack Obama over Iran’s regional actions and growing Arab suspicions of Tehran’s involvement in Iraq, Syria, Lebanon, Yemen and even Afghanistan and Pakistan. “When you deal with Iran you have to deal with all these cards. All of these issues are of instability and they have to be discussed with the Iranians; you can’t discuss them in isolation,” he said. He confirmed that Jordan is currently in discussion with the Iranians about its role and actions and that he was hopeful that such talks will bear fruit.

Even on Syria, the king’s position is in contrast with that of its Gulf allies. In the Fox News interview, Abdullah said that there were “two wars being waged in Syria; one against the regime and one against IS, and which one is the priority? In my view it’s IS.”

Mohammad Abu Rumman, a political analyst and specialist in Islamist groups, told Al-Monitor that he believed the Saudis have decided to “freeze Arab differences for now” to give the campaign in Yemen a fair chance at success. “This may have reduced Jordan’s regional role and influence after a period of heightened activity,” he said.

Although the king praised the close relationship between Jordan and the United States, he concurred that such ties are going through an evolution. He also said that America’s role in the Middle East has changed and for him it has been “a wake-up call.”

Political analyst Orieb al-Rintawi agreed. He told Al-Monitor that the war in Yemen will have a direct effect on the war against terrorism. “We may be witnessing a breakup in the anti-terror coalition and a return to a foolish theory of backing Salafist jihadists to face the Shiite threat in the region,” he said. “The US finds itself in a gray area. On one front, it considers Islamist terror as a direct threat, and, on a second front, it builds a close relationship with Iran to face a common enemy, and on a third front, it says it supports its Saudi and Gulf allies. It faces a tough balancing act in its regional affairs,” Rintawi said.

Even on Libya, Abdullah has chosen to adopt a policy that is at odds with most Western and Gulf allies. On April 13, he received the head of the Libyan army, Gen. Khalifa Hifter, at his Amman palace, sending a message that Jordan has chosen one side over the other in the protracted Libyan conflict.

Facing major economic difficulties, made worse by the presence of 1.5 million Syrians on Jordanian soil, Abdullah is trying to guide his country through bumpy terrain. His commitment to fighting Islamist terrorists is solid, but he is having a difficult time maintaining Jordan’s role in the international alliance while coping with major regional crises. His differences with his allies may have become accentuated lately, but this has not prevented him from reiterating his stands.

“There are no gray areas in the king’s position on regional issues,” Khitan said.