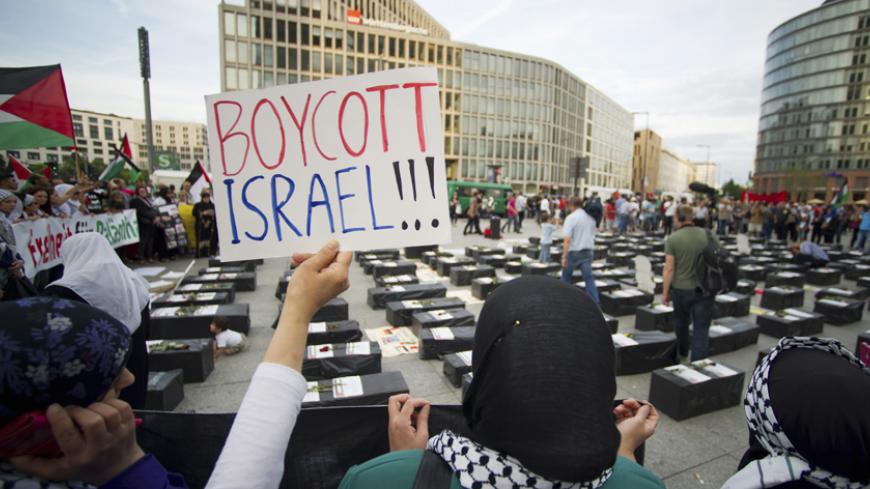 A woman holds a sign that reads "Boycott Israel" in front of symbolic coffins while attending a demonstration supporting Palestine, in Berlin, Aug. 1, 2014. - REUTERS/Steffi Loos

“The Passover Haggadah speaks of the promise made in the Heavens for the survivability of the Jewish nations, despite its enemies: ‘This is what stood by our forefathers and us. For in every generation they try to destroy us, and the Holy One blessed be He saves us from their hands.’” These lines, reflections by Supreme Court Justice Elyakim Rubinstein, were published April 3 in an opinion on the eve of Passover.

Rubinstein’s musings animate his arguments for backing legislation dubbed the “anti-boycott law,” which allows suing anyone for damages who publicly calls for “deliberately avoiding economic, cultural or academic ties with another person or body solely because of their affinity with the State of Israel, one of its institutions or an area under its control.” The law states that should the court be convinced that a public call for imposing a boycott for the cited reasons was voiced with malicious intent, it has the right to force the boycotting party to pay damages to the plaintiff.

According to the bill passed by the Knesset in 2011, plaintiffs do not have to prove that they actually suffered harm. On appeal, the High Court revoked this article, so plaintiffs must prove linkage between the call for a boycott and any financial damage they feel they suffered. In addition, the bill allows the government, with the approval of the Knesset’s Constitution, Law and Justice Committee, to set regulations to limit participation in tenders by those who knowingly publish a public call for boycotting or who commit themselves to taking part in a boycott. Similarly, the government can revoke eligibility for governmental support or funding.

“There is no flaw in the Knesset giving expression in law to a struggle against those who try to destroy us,” Rubinstein said. The justice had in the past served as attorney general, Cabinet secretary and as deputy chief of mission at the Israeli Embassy in Washington. With these words, he actually gave a legal stamp of approval to imposing Israeli state law on territory outside its borders, which is another way of calling for the annexation of the West Bank. Together with four of his colleagues in an assembly of nine justices of the High Court, Rubinstein equated a boycott against the wineries of the northern Israeli town of Zikhron Ya'akov with a boycott of wine produced in a Hebron Hills settlement. Thus, while blurring the issue of the Green Line boundary, the justices placed a question mark over the boundaries of free speech in Israel.

New High Court Justice Miriam Naor explained her support for the law thusly: A call for boycott because an enterprise or factory is connected to a specific area under state control falls into the category of “boycott of the State of Israel” as defined by law. Justice Hanan Meltzer, who wrote the majority opinion, said, “Generally, a boycott is a bad thing for any state,” adding, “including the Jewish state.” This implies that regions under Israeli control, in the language of the law, are also considered part of the Jewish state. This should not be confused with “the state of the Jews” as delineated by the visionary Binyamin (Theodor) Ze’ev Herzl, in a definition accepted by many among the Israeli public.

Justice Yoram Danziger, who formulated at length the opinion of the four dissenting justices, also addressed the issue of the political-public borders framing the boycott issue. “The fate of the region and the settlements within it are given to severe political and public disagreement,” he wrote, adding, “I don’t think it’s an exaggeration to estimate that the ‘territory issue’ is one of the most controversial political issues in Israel.” In contrast to Rubinstein, Danziger does not think that those entities and people who call for boycotting the settlements want to “destroy the Jewish people.”

Danziger argued that calling for a boycott with the intent of expressing great dissatisfaction with the government’s policy regarding the territories, declining to show support for this policy or convincing others to oppose this policy is a form of political expression that clearly falls under political free speech. Therefore, those who call for a boycott of the settlements deserve the full protection embodied in the Israeli constitutional regime for political expression. Attorney Gaby Lasky, who represented Gush Shalom in the appeal, reformulated Danziger’s words in her response to the decision in asking why it was permissible to boycott cottage cheese produced within the Green Line due to its high price — referring to the consumer boycott that led to the summer 2011 social justice protests — while it is forbidden to call for boycotting cottage cheese produced in a settlement.

According to the perspective characteristic of several elected public officials and many Israeli voters, anything considered to be “for the good of the state” should prevail over the good of the individual and democratic principles. Every protest against the existing order is suspected of being a left-wing conspiracy to bring down the government. This outlook emerged in its purest form in the speech by the Speaker of the Israeli parliament at the April 22 torch-lighting ceremony on Mount Herzl inaugurating Independence Day celebrations.

In the speech traditionally used to encapsulate the Israeli ethos, Knesset Speaker Yuli Edelstein criticized the civil, social justice protest movement. He stated, “There are those among us who constantly search for opportunities to slander the country, who are obsessively occupied with blackening our faces.” In this way, Edelstein rebuked the nation's social justice activists. A high-ranking parliamentarian, Edelstein chooses to live in Alon Shevut, a settlement that like all settlements is controversial. He called to “retire,” in his words, the “defective discourse” regarding the high cost of living, thus emulating commanders of the Israel Defense Forces who line up new army recruits and shout, “Attention, march!”

Israeli President Reuven (Rubi) Rivlin, a former Knesset speaker, had in the past strongly opposed the boycott law. The day after the Knesset's ratification of it in July 2011, Rivlin took the unusual step of publishing a scathing article in Ha’aretz in which he warned, “Woe betide the Jewish democratic state that turns freedom of expression into a civil offense.” Rivlin warned that the legislation threatens to catapult us into an era in which gagging people becomes accepted legal practice and brazenly defies the basic freedoms of the sovereign, namely, the citizens of the State of Israel. “I stand ashamed and mortified before my mentor, [Revisionist Zionist leader] Ze’ev Jabotinsky, for not having succeeded in protecting the individual, whom he likened to a monarch, against the parliamentary fists of the majority,” Rivlin wrote.

Ever since Rivlin was chosen to be the tenth president of the State of Israel, this offspring of the nationalist camp has, time after time, risen to the defense of minority groups and denounced expressions of racism. While the government and the Knesset consign human rights and freedom of expression to the bottom of their value system, and at a time that the High Court fears for its autonomy, President Rivlin has become a great consolation to those Israelis who venerate the guiding light of democracy.