How Nespresso and a whiteboard sealed the Iran deal

An inside look at the marathon negotiations between the P5+1 and Iran that led to the provisional nuclear accord. 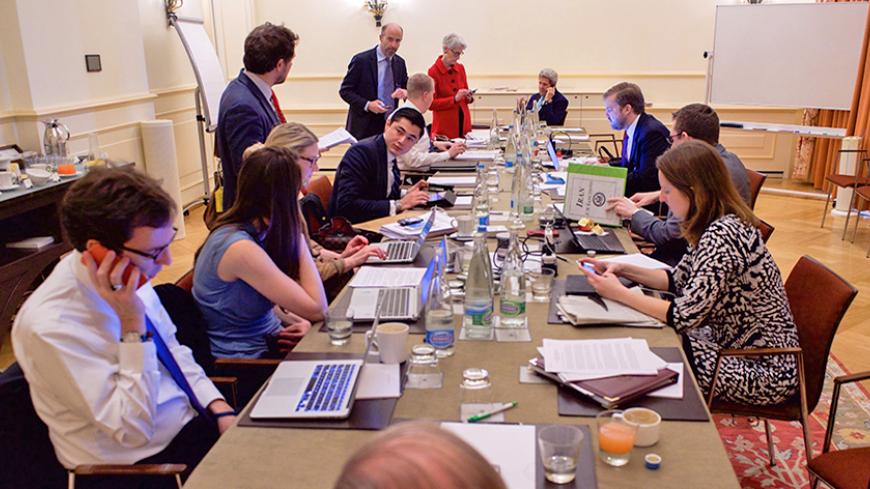 US Undersecretary of State for Political Affairs Wendy Sherman (in red) and US Secretary of State John Kerry (both at far end of table) meet with a cross-governmental team of advisers in Lausanne, Switzerland, April 2, 2015. - State Department

When foreign ministers and negotiators from six world powers and Iran took to the stage at a Lausanne university auditorium April 2 to announce the reaching of a provisional Iran nuclear accord, much of the audience and the world was blindsided by the level of detail in the announced framework deal.

“There will be no other enrichment facility than Natanz,” European Union foreign policy chief Federica Mogherini said in a joint statement with Iran Foreign Minister Mohammad Javad Zarif in Lausanne on April 2.

“Fordow will be converted from an enrichment site into a nuclear, physics and technology center,” Mogherini, speaking on behalf of the P5+1 — the five permanent UN Security Council members plus Germany — added. “There will not be any fissile material at Fordow. … A new UN Security Council resolution will endorse the JCPOA [final agreement, the Joint Comprehensive Plan of Action], terminate all previous nuclear-related resolutions and incorporate certain restrictive measures for a mutually agreed period of time.”

There was a “sense of surprise, if not shock … at the detailed document produced,” Suzanne Maloney, a former State Department Iran expert, told Al-Monitor on April 7 about the publicly announced details of the preliminary agreement, after expectations had been set for a short, bland press statement if any preliminary deal could be reached at all. “It caught the Washington policy community off guard.”

“A lot of it surprised me,” former US nuclear negotiator Robert Einhorn told Al-Monitor on April 7. “It’s much more detailed and comprehensive than I expected. The constraints, especially in the first 10 years, are greater than expected. The verification measures were especially impressive.” 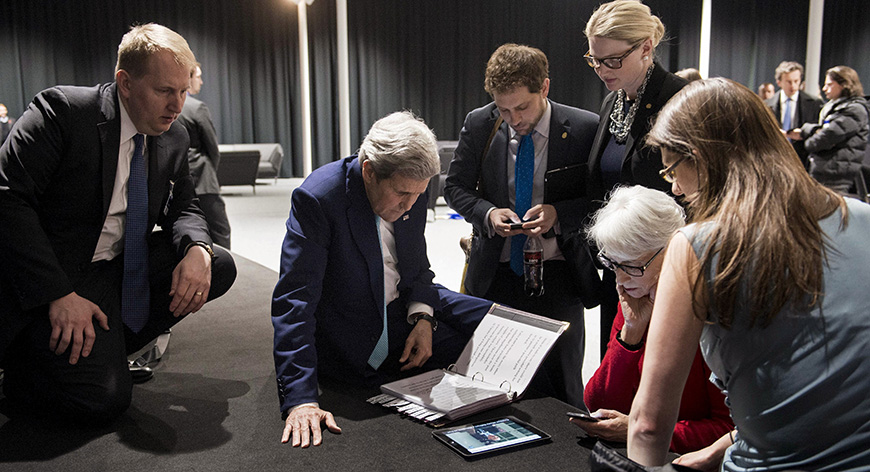 In Switzerland, US Secretary of State John Kerry, US Undersecretary for Political Affairs Wendy Sherman (in red) and senior advisers watch US President Barack Obama hold a news conference from the White House Rose Garden, April 2, 2015.

The detailed preliminary accord announced by Mogherini, Zarif and US Secretary of State John Kerry on April 2 was the culmination of grueling, sleepless, round-the-clock negotiations that lasted over nine hours the final night, until 6 a.m. April 2. Negotiators broke for an hour of sleep and breakfast before resuming talks later that morning.

In all, Kerry spent a full 19 days at the Iran nuclear negotiating table in Switzerland in March, and held dozens of hours of meetings with Iran and P5+1 counterparts, including over 10 hours of one-on-one talks with Zarif alone, US officials said.

In fact, Kerry and the US negotiating team became more convinced that they would probably be able to reach the preliminary deal with Iran late March 31, two nights before it was announced, US officials said.

Kerry said he thought March 31 that “he knew it was going to come together,” a senior US administration official, speaking not for attribution, told journalists en route back to Washington from Switzerland on April 3.

“I think we all knew it was coming together about then,” the US official said. “The trick was getting it to come together.”

“You can see it, you see the deal, you see how the pieces … are going to come together,” the official added. “You know what the elements are, but knocking it out is another story altogether.”

It’s not clear that a major breakthrough on a particular substantive issue occurred in the final overnight negotiating round that made a deal that wasn’t possible earlier in the week possible at the end, so much as they were able to put all of the pieces in place and gather momentum to overcome final glitches and roadblocks. (Indeed, one of the most wrenching issues for Zarif the final night of talks with Kerry was apparently the detailed fact sheet on the framework deal that the United States insisted it needed to release to be able to make the case in Washington for the emerging deal and try to prevent congressional hawks from killing it. Zarif, who on top of no sleep was also suffering from a bad cold during the Lausanne talks, has bitterly complained the US fact sheet is deeply unhelpful to his task of selling the framework deal at home.)

“The solutions are good for all, as they stand,” Zarif complained April 2 on Twitter. “There is no need to spin using 'fact sheets' so early on.”

The solutions are good for all, as they stand. There is no need to spin using "fact sheets" so early on.

US officials acknowledge the Iranians were not happy about their plans to release the fact sheet, but said Zarif and Kerry discussed the issue in advance, and insist there was no other way to protect the political space for a deal. The United States and Iran agree on the facts that were agreed, and also that each side can have its own narrative, emphasizing the points useful for selling the deal to their respective publics, US officials said.

The Iranians wanted “nothing on paper,” Ilan Goldenberg, a former Obama administration Middle East official, told Al-Monitor on April 7. “The American view is that is impossible.”

Even with the prospective framework deal seemingly within reach, putting all the pieces in place the last days “was quite a roller coaster,” the US official said. “We’d get close, we kept on changing the plane schedule. … It was like that all week,” up until the framework deal was announced April 2.

The constant whir of the Nespresso machine in the US negotiating room became the soundtrack of the almost round-the-clock negotiations in the final days. Experts and negotiators continued their consultations over room service meals delivered to the negotiating suites. The last days of the talks, from March 31 to April 2, US and Iranian team members got a maximum two hours sleep a night.

One weary US expert at one point accidentally used permanent marker on the erasable whiteboard the Americans were using to track all the elements of a framework deal they needed to get in place. It took 20 minutes for him to erase the apparently classified numbers of the calculation on a nuclear issue from the board, officials said.

“So we put up all the elements on a whiteboard,” the US official said, noting the erasable chalkboard was useful because it did not create a paper trail that diplomats would have to immediately report back to Tehran.

“What we did with Abbas [Araghchi] and Majid [Ravanchi] on Wednesday night [March 25] was sort of go through all of the elements: what had been … (tentatively) agreed, where had we sort of locked in a solution, what yet had to be resolved, sort of what’s going to be our work plan for the week … how were we going to use the time, how were we going to get this done,” the US official said.

“Knocking it out” the final nights

“What really finally knocked it out was a session that started at about 9 o’clock [March 31],” the US official said.

In the room, on the US side, were Kerry, Sherman, National Security Council Middle East czar Rob Malley and US Secretary of Energy Ernest Moniz, as well as European Union deputy negotiator Helga Schmid. On the Iranian side were Zarif, Araghchi, Ravanchi, Ali Akbar Salehi, the head of the Atomic Energy Organization of Iran and Hossein Fereydoun, the Iranian president's brother.

Moniz “came in and out of the session because he was meeting separately with Salehi to try to come to closure on some of the out-year issues, as well as years one to 10, but on the out-year issues as well, on R&D [research and development] and enrichment,” the US official said. “We kept bringing people in and out as well.”

“So we started at 9 o’clock and we just took issue after issue after issue, and tried to bang through solutions,” the US official said. “Many moments we thought we’d call it … a night, decide we’d gone as far as we could go, then we’d all take deep breaths and try again.” 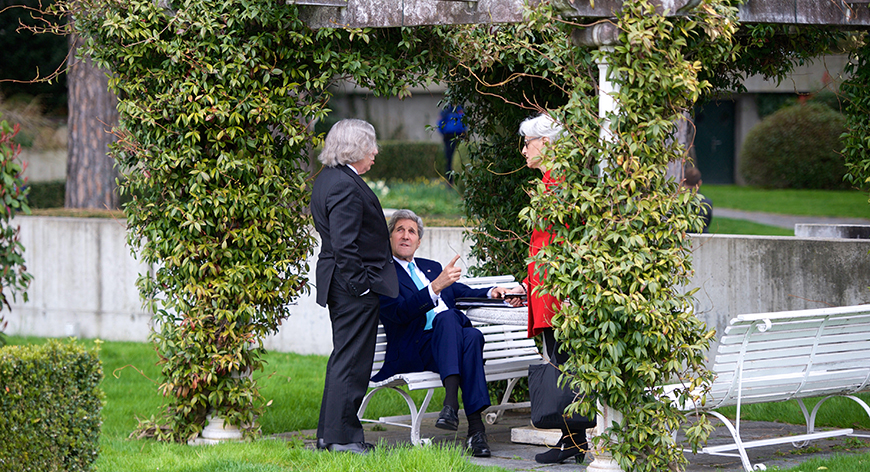 “Salehi and Moniz were meeting separately,” the US official said. “We’d bring them in at times, take them out.“ One of the officials would go out and brief other foreign ministers, “keep them up to date, and try to keep a record of where we were that we could agree to.”

“So it was very, very intense,” the US official said. “It went from … about 9 in the evening until 6 in the morning when we all decided we’d reached a couple of roadblocks, didn’t know whether we’d be able to get past them, and we were all utterly, utterly exhausted.”

The official said, “So we all went to sleep at, by maybe 7, got up again and started again about 9:30, and engaged on what we thought were the really final issues."

“It took some Salehi and Moniz meetings, it took our small group meetings, it took meetings between Kerry and Zarif one on one, [Sherman] and Abbas one on one — just various combinations that helped,” the US official said. Kerry chief of staff “[Jon] Finer came in when we wanted another person to come in with another message.”

“So it became apparent to us, I think, pretty much by yesterday morning [April 1], late morning, that we could probably pull this together,” the US official said. “We needed to make sure that we understood each other, we knew what was getting agreed. … So we had a couple of last-minute glitches, which one always does, which just makes it all the more pleasurable.”

What were the glitches?

“Well, we have some mechanisms that we have to put together to deal with various issues, and we had a couple of countries who began to wonder whether … that was the right way to go forward to solve problems,” the US official said. “But it all got resolved. I think a certain momentum takes over, everybody begins to realize it’s going to happen, and that momentum helps to get the problem solved.”

“And so Kerry saw Zarif one last time to just ensure we were where … we thought we were,” the US official said. “One has to be excruciatingly clear and direct about what’s been agreed so there’s no misunderstanding, no renegotiation — which has happened in the past — where you think you are at a particular place and find out actually, not so much, and have to start all over again.”

“So we got an understanding of where we were,” the US official said. “Everyone came on board. Everyone thought you have to make a judgment: ‘Have you made enough progress? Is there enough substance in all of the elements that you could really say that you have gotten solutions for all the key parameters of a deal so that you can in fact start negotiating?’ It doesn’t mean you’ve taken care of every problem, and heaven only knows you haven’t dealt with all the technical issues that you will need to for a joint comprehensive plan of action.

“But it became quite apparent we did,” the US official said. “All the ministers agreed.”

It was Zarif who first announced the agreement was reached.

Negotiators are expected to resume talks in a week or two to begin drafting the comprehensive accord due by the end of June.

“When they resume again, it is very important that one of the first things they do is reconfirm what they have agreed to so far,” former negotiator Einhorn said. “So they don’t go into divergent paths, they need to nail that down.”