John Allen, US special presidential envoy for the Global Coalition to Counter ISIL, suggests a deeper US military commitment in Syria; Turkey’s "precious loneliness"; Egypt closes 27,000 places of worship to counter militancy and extremism; Al-Monitor’s series on Women in the Middle East continues. 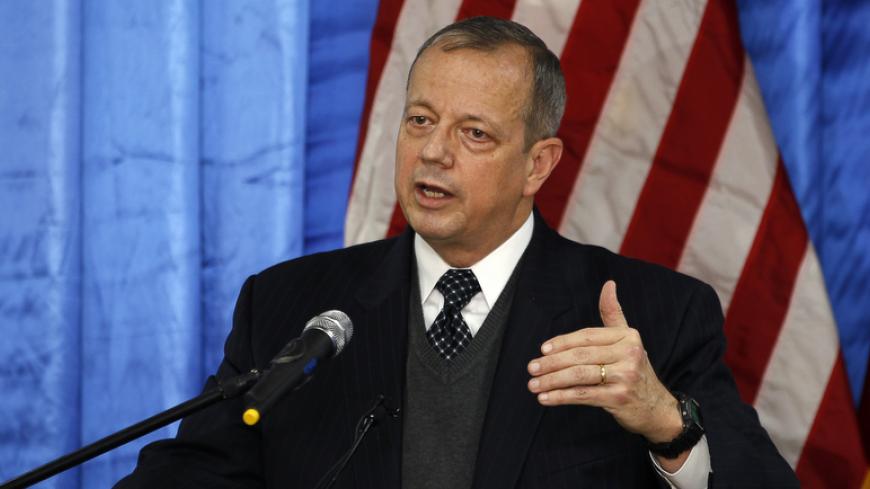 Retired US Gen. John Allen, special envoy for building the coalition against the Islamic State, speaks to the media during a news conference at the US Embassy in Baghdad, Jan. 14, 2015.

The US special presidential envoy for the Global Coalition to Counter ISIL said on March 2 that the United States “will protect” Syrian rebel fighters trained and equipped by the United States, adding that a US-enforced no-fly zone or protected corridor is “under consideration,” as reported by Barbara Slavin for Al-Monitor.

The remarks by retired Marine Gen. John Allen suggest a military commitment beyond what is proposed by the Barack Obama administration’s draft authorization to use military force, which is presently before Congress, and may give new life to Turkey’s bid to draw the United States into military action against Syrian President Bashar al-Assad.

Turkey has sought a no-fly zone in Syria as a buffer against the growing number of Syrian refugees in Turkey (expected to reach 1.7 million this year) and as a base for Syrian armed opposition forces to operate against the Syrian government, as well as against the Islamic State (IS).

This column reported last week that Turkish Foreign Minister Mevlut Cavusoglu said on Feb. 23 that Turkey expects those Syrian fighters trained in Turkey — per an agreement between Washington and Ankara on Feb. 19 — to battle the Syrian government, as well as IS. Cavusoglu’s understanding was in contrast to that of the US Defense Department, according to Pentagon spokesman Rear Adm. John Kirby, who said four days later that “the Syria component of this campaign is an anti-[IS] component. That's the focus, not about the Assad regime. [N]othing has changed about … the policy that there's not going to be a US military solution to Assad.”

A survey of the record of the recent US interventions in Libya and Iraq should give pause about the consequences of deeper US military involvement in Syria without a careful weighing of the consequences, or what might come next. It would take a brief Google search to recall the premature exclamations of the "success" of the NATO intervention in Libya in support of anti-Gadhafi forces. Libya, for those who may have missed it, has since become a failed state where Islamic militants and armed gangs hold sway, as well as a hub for extremists en route to armed jihad in other countries in Africa and the Middle East.

Another red flag for the United States should be reports of what may be renewed efforts to mainstream or engage Jabhat al-Nusra by some US allies. Reuters reported this week that Jabhat al-Nusra, which the US State Department designated a terrorist group in December 2012, is considering renouncing their pledge of loyalty to al-Qaeda and that by doing so the group’s leader anticipates a funding windfall: “Intelligence officials from Gulf states including Qatar have met the leader of [Jabhat al-] Nusra, Abu Mohamad al-Golani, several times in the past few months to encourage him to abandon al-Qaeda and to discuss what support they could provide, the sources said. They promised funding once it happens.”

This column warned in December 2013 about the mainstreaming of Islamic extremist groups such as Jabhat al-Nusra in the context of an alleged greater good in the battle against the Syrian government.

As Julian Pecquet reports, the Senate Foreign Relations Committee will be taking up that debate on March 11, when Secretary of State John Kerry, Secretary of Defense Ashton Carter and Joint Chiefs Chairman Martin Dempsey are all scheduled to testify. As the US Congress considers the extent and limits of the use of military force in Syria, it might be worth seeking some clarity on the administration’s intentions regarding a no-fly zone and protection of rebel forces, as well as a report on specific actions taken by Turkey to crack down on IS, Jabhat al-Nusra and other terrorist groups operating in Syria.

Semih Idiz writes that Turkish President Recep Tayyip Erdogan may take pride in his country’s declining diplomatic fortunes: “Erdogan’s visit [to Saudi Arabia] follows his recent remark that ‘he could care less’ about Turkey’s regional isolation, which his chief foreign policy adviser Ibrahim Kalin has dubbed ‘precious loneliness,’ arguing that it is based on Turkey’s ethical stance on regional issues.”

Metin Gurcan reports that the Turkish military’s evacuation of 38 Turkish soldiers and the remains of the Tomb of Suleiman Shah on Feb. 22 from Turkish territory inside Syria may be more political fiasco than military triumph: “Was the evacuation operation a 'victory' that exhibited Turkish military prowess to the Middle East and the world, as boasted by pro-[Justice and Development Party] media, or ‘a frightened escape under IS pressure,’ as charged by the opposition? The answer is not yet clear.”

Fehim Tastekin writes that Turkey’s trade with North Africa has declined due to the poor state of relations between Ankara and Cairo: “Turkey’s export sector, which has been coming up with alternative routes after losing its Syrian routes, is now gearing up to pay the cost of the crisis with Egypt because of Turkey’s non-recognition of President Abdel Fattah al-Sisi.”

Egypt has intensified its counterterrorism initiatives to combat mobile and deadly groups in the Sinai Peninsula, whose resilience may have cost former Interior Minister Mohamed Ibrahim his job last week.

Fear of the spread of extremism has motivated a recent Egyptian court ruling that would close smaller, harder to monitor, places of worship in a decision that affects 27,000 mosques and religious gathering places across the country.

Rami Galal reports that the move is intended to “help mitigate the influence of extremist religious orators such as those affiliated with the Muslim Brotherhood, Salafist groups or Shiites, who use those places of worship to take advantage of religious gatherings.”

Enas Hamed writes: “According to Malek Adly, a lawyer at the Center for Economic and Social Rights, the anti-terrorism law offers a loose definition of a terrorist entity. Adly said the provisions of any law should be precise. Based on this definition, all parties, student unions, movements and human rights organizations run the risk of being deemed terrorist entities.”

Adnan Abu Amer reports that Hamas is trying to avoid escalation by making clear it has no hand in the Sinai unrest: “The security measures by Hamas on the border with Egypt aim at preventing any infiltration from and into Sinai, as the movement fears to be dragged into an Egyptian internal conflict, which would have significantly negative consequences.”

Women in the Middle East

Al-Monitor’s series on Women in the Middle East continues through the end of March. Coverage this week examined the evolving role of women in the region and included perspectives from some of Al-Monitor’s own writers based on their personal and professional experiences as journalists.