The Egyptian Ministry of Religious Endowment has shuttered 27,000 local places of worship under the pretext of fighting terrorism, while awarding 400 preaching permits to Salafists. 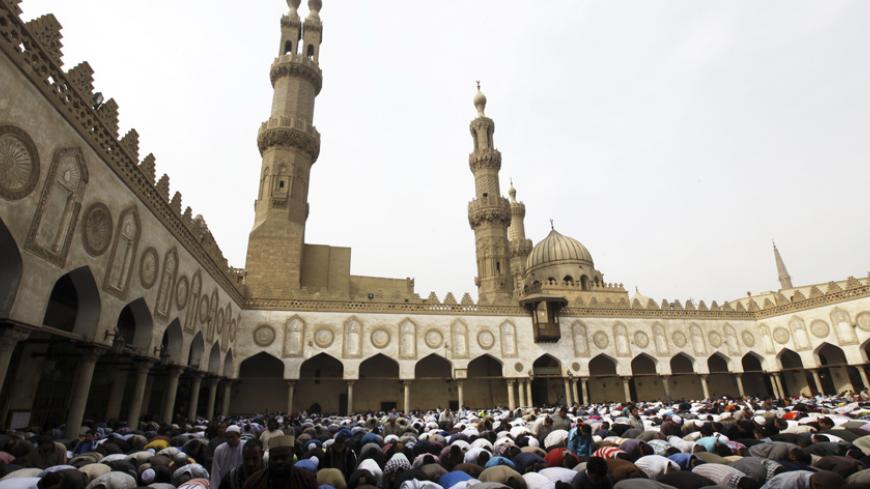 An Egyptian administrative court on Feb. 18 upheld the Ministry of Religious Endowments’ decision issued in September 2013 to close down neighborhood places of worship of less than 80 square meters (861 square feet), a move intended to protect young people from the militancy and extremism that can prevail in such places, which lack the legal standing to hold Friday prayers.

This move sets a precedent that raises many questions about the fate of mosques in many Egyptian villages, the grounds of which are usually less than 80 square meters. In reply, opponents of the decision such as the Salafist Nour Party claimed that closing down places of worship without providing a larger alternative serves to further bolster extremist ideology, considering that the larger existing mosques cannot accommodate Friday worshippers who line surrounding streets to pray. On the opposite end of the spectrum, supporters of the decision such as intellectuals and scholars say that those mosques are time bombs that threaten national security, as they fall outside the purview of the Ministry of Religious Endowments and are used to spread subversive ideologies.

At the same time, the ministry has awarded 400 preaching permits to Salafist leaders without requiring oration tests, despite the ministry's previous and constant accusations that they spread extremism.

Ahmed Karimeh, a professor of Sharia at Al-Azhar University, told Al-Monitor that legal teachings and conventions specify that Friday, Eid and main prayers must be conducted in a mosque, and not in a neighborhood place of worship. The five daily prayers can be held at these informal sites, but not the special celebration prayers. In that sense, the Egyptian Ministry of Religious Endowments upheld a recognized religious law.

Karimeh explained that closing those neighborhood places of worship, located in apartment buildings, commercial buildings or factories, would help mitigate the influence of extremist religious orators such as those affiliated with the Muslim Brotherhood, Salafist groups or Shiites, who use those places of worship to take advantage of religious gatherings. As such, the Ministry of Religious Endowments’ decision, while late, was the correct one.

But Karimeh warned that the move would be to no avail if the ministry allowed people without credentials to take to pulpits. Initially, in August 2013, the ministry allowed only Al-Azhar imams access to pulpits, a decision later reversed in February when, for political considerations, the ministry allowed Salafists to preach, a disastrous decision that turned mosques into time bombs under the control of violent, Salafist-born militant factions, according to Karimeh. Allowing Salafists to preach for political considerations as an Islamic alternative to face the Islamic State ideology, at a time when hundreds of Al-Azhar scholars applied for but were denied preaching permits, runs contrary to the ministry’s repeated statements that it would bar non-Al-Azhar imams from taking the pulpit.

Karimeh criticized the ministry’s examination policy and said that it solely tested the applicant’s memorization of the Quran, without evaluating his general culture. He added that closing down neighborhood places of worship would not be enough to confront extremism. Toward that end, attention must be paid to the preachers, who should be properly schooled and financially compensated, so as to allow them to better educate themselves, instead of having to work as taxi drivers or vegetable vendors to provide for their families.

Karimeh also denied claims that some villages lacked proper mosques. It should be noted that neighborhood places of worship and mosques with surface areas of less than 80 square meters numbered 27,000 in all of Egypt’s provinces and villages.

Before the Ministry of Religious Endowments made its decision, the Egyptian Dar al-Fatwa issued a September 2013 edict, endorsed by a majority of religious scholars, barring the multiplicity of mosques in villages and cities, unless when absolutely necessary, as a plethora of places of worship only serve to divide believers. It explained that group worship was required for all scripted prayers, as those were celebrated for the love of God, but Friday prayers were inherently different, in that they are a form of offering to God.

An estimated 400 permits were issued to Salafists, who pledged not to use Friday prayers for political purposes. A follow-up committee was formed by the ministry in February to oversee new imams during Friday prayers, cancel their permits and initiate legal proceedings against them if they failed to abide by their agreement with the ministry, as well as permanently bar them from taking the pulpit of any mosque in the country.

The Egyptian Ministry of Religious Endowments previously adopted numerous measures to combat extremism and control religious rhetoric, and continuously affirmed that imams not affiliated with Al-Azhar would never be allowed to preach, going as far as to close down 27,000 neighborhood places of worship. The sudden shift in position by the ministry was followed by it issuing preaching permits to 400 Salafist leadership figures that it considered extremist, a clear reflection of the state of confusion that prevails in Egypt today.