Foreign Minister Avigdor Liberman, former Minister Moshe Kahlon and others are positioning themselves to join a possible right-wing coalition government after accepting the impossibility of toppling Prime Minister Benjamin Netanyahu with votes from the center. 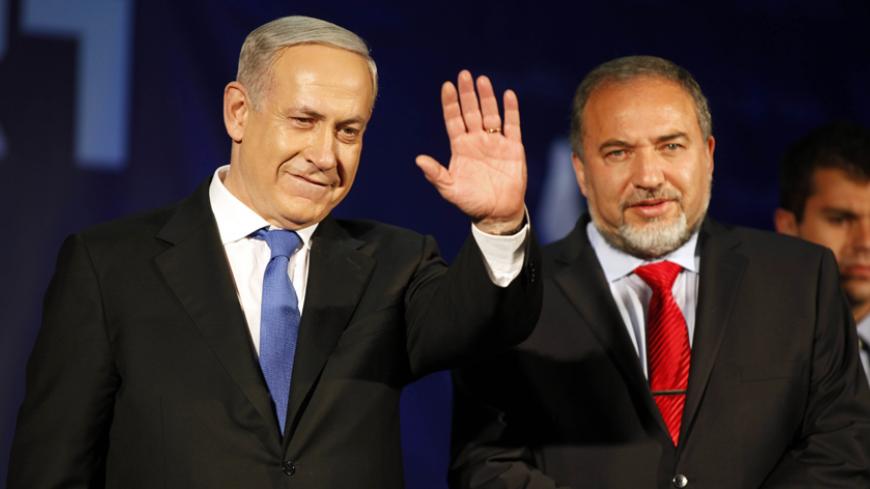 Foreign Minister and Chairman of Yisrael Beitenu Avigdor Liberman was the first to signal that he sees no chance of Zionist Camp Chair Isaac Herzog forming the next government. Liberman is known for his ability to read the current political map and to adjust himself accordingly. It should be remembered that he entered the election campaign as the person who would determine whether incumbent Prime Minister Benjamin Netanyahu would continue serving as prime minister. He then moved himself and his party to the center with a diplomatic plan and even dared to consider himself a candidate for prime minister. Those were the days, however, when the “Anyone but Bibi” coalition was gathering momentum, and it looked as if the threesome of Liberman, Shas Party leader Aryeh Deri and Kulanu Party leader Moshe Kahlon would determine Netanyahu’s fate. This ultimately provided the tailwind needed to propel Herzog and Hatnua leader Tzipi Livni to join forces in December 2014.

Then the Yisrael Beitenu scandal erupted. The party collapsed in the polls, and Liberman returned to his natural element on the right, hoping to save his core of supporters for himself. Those supporters are embedded deeply on the right.

As soon as Liberman came to terms with his new circumstances, he returned to play on the right wing. This, in turn, put the brakes on his collapse in the polls. Over the past few days, he has already made a series of clear and decisive statements along the lines of, “We will never be partners in a left-wing government.” He later offered his assessment that a government headed by Herzog would in any case never be formed and determined that there were only two realistic options: either a right-wing government or a unity government headed by the right.

On the night of Feb. 8, he took all this one step further, by announcing on ''Meet the Press'' (Channel 2) that he would demand the Defense Ministry as a condition for joining the government. This demand directly targeted the soft underbelly of his supporters as well, with Liberman explaining that if he is put in charge of Israel’s security, he would adopt a far more decisive policy against Hamas and Hezbollah.

Liberman’s natural electorate loves when he is brusque and aggressive in talking about the Arabs, so Liberman used that very formula to come up with the following complex statement on his Facebook page: ''Israel should respond to operations against us just as the Jordanians responded to the immolation of their pilot. That is the only relevant approach in the Middle East.''

Following Liberman’s lead, the chairman of Shas, Aryeh Deri, also hinted that he would prefer a government headed by Netanyahu, even though in the not-too-distant past, he had given the impression that he would likely recommend Herzog to the president, who selects who will try to form a government. Like Liberman, Deri realized that this was the right moment in the campaign to mark his territory. Furthermore, he understood that his pool of voters identifies with the right. As such, it would not want to see him contribute to the formation of a Herzog-Livni government with the help of the Arab Party. So Deri honed his messages accordingly. In an interview with the Israeli news site Walla on Feb. 8, he said explicitly that Herzog now has no possibility of forming a government.

When asked about his past support for Herzog, he answered quite simply, “We were in the opposition. It was our job to bring down the government, and we brought down the government.” Like Liberman, Deri also presented a price tag for joining the government. It included public housing and a series of demands to benefit the poor.

While Liberman and Deri are signaling their direction, Naftali Bennett is also being forced to fight for his place in Netanyahu’s fourth government. While he may be a natural partner, he has also suffered from a painful drop in the polls. In a somewhat tense interview on Israeli TV Channel 2 Feb. 9, Bennett laid all his cards on the table: Let’s be realistic. Netanyahu will be the next prime minister. Deri said so. Liberman said so.

In the situation that has emerged, with Deri and Liberman both hoping to join the Netanyahu government and Bennett's decline in the polls, Bennett realizes that his bargaining power with Netanyahu is diminished. He is thus honing his campaign and his message accordingly. Bennett is warning his followers on the right that if they do not sufficiently support him, there is a risk that Netanyahu will approach Livni. Although Netanyahu announced on Twitter that he would not form a government with the left-wing parties, Bennett wants to create a sense of urgency on the right. To do this, he argues that the possibility of such a scenario is quite realistic.

Bennett is no different from Liberman and Deri. He also has a price tag. In his case, it is giving the Ministry of Internal Security to his Knesset member Ayelet Shaked and also receiving the Justice Ministry.

What Liberman, Deri and Bennett say explicitly, Kahlon cannnot. Nevertheless, it is quite obvious that he does not intend to declare that he supports Herzog for the position of prime minister. Kahlon will maintain his ambiguity. He will not commit to supporting anyone before the elections take place. Nevertheless, with the breakdown of seats showing an increasing advantage for the right-wing bloc, there is reasonable cause to assume that Kahlon would return to a Netanyahu government in exchange for the Finance Ministry. For that, he would need eight to 10 seats, and he intends to spend the remaining weeks until the elections fighting for that.

The ultra-Orthodox Yahadut HaTorah has also signaled that it would recommend Netanyahu for the premiership. Even Yesh Atid leader Yair Lapid — who was fired from the Netanyahu government, accused Netanyahu of being “detached” and declared that Netanyahu would not be the next prime minister — is now trying to win votes from the soft right. He has no intention of falling into the left-wing bloc’s trap and refuses to commit to recommending Herzog to the president.

The most recent Channel 10 poll, from Feb. 8, indicates that the Likud and the Zionist Camp are running neck and neck, but that when the parties are divided into blocs, Netanyahu can form a right-wing coalition, boosted by Kahlon, with 69 seats, while a coalition of the Zionist Camp, Yesh Atid, Meretz and the Arab Party has just 51 seats.

Kahlon, Deri and Liberman all see these trends in their internal polls. They are not built to serve the people from the opposition, and that means that we can officially declare the final demise of the plan to overthrow Netanyahu from the political center. Everything that these three candidates are doing and will do until the upcoming elections will focus on efforts to increase their strength. That way, when the time comes, they will each be in an optimal bargaining position to negotiate with Netanyahu over forming the next government.