Why scandals are good for Netanyahu

Despite the growing economic crisis and the diplomatic stalemate, Prime Minister Benjamin Netanyahu has so far managed to focus the electoral agenda on himself and on the Iran issue. 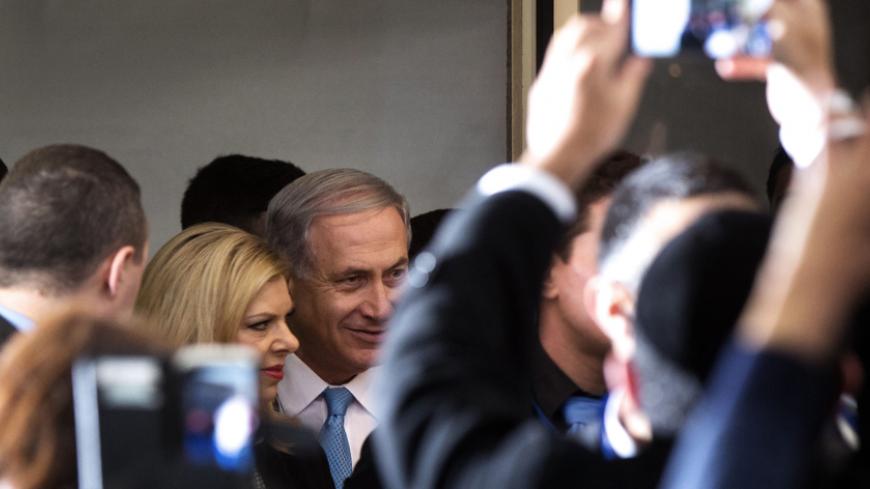 “Anyone who has eyes in his head understands that the wave of media mudslinging against me and my wife, which is being conducted full strength three weeks before the elections, is an orchestrated campaign to topple the Likud government I head and exchange it for a left-wing government headed by [Zionist Camp co-chairs Tzipi Livni and Isaac Herzog]. The public is smarter than that and does not buy into it.”

This excerpt was taken from a short post by Prime Minister Benjamin Netanyahu on the evening of Feb. 22, on his Facebook page, which is followed by about 1.17 million people.

The personal and somewhat emotional appeal of the prime minister to the public, three weeks before elections, followed several days of reports of alleged personal misconduct on the part of the prime minister and his wife that topped the Israeli agenda. The premier's appeal is part of an election strategy designed to keep the election discourse right where it is. The only thing that went awry in the plan is the police interview of Manny Naftali, former caretaker of the prime minister’s residence. The investigation that will probably open shortly could shed new light on the affair and will determine whether criminal activity actually took place, and Netanyahu may lose control over the whole thing.

Meanwhile, as incredible as this will sound, the prime minister actually profits from the public and media discourse surrounding his hedonistic lifestyle, his wife’s alleged tantrums and testimony regarding impropriety in his residence. Thus, all the substantive issues on which an election campaign should be based were left behind. These issues include Israel’s crumbling foreign relations, a destructive diplomatic stalemate with the Palestinians, the controversial results of the 2014 Protective Edge campaign and above all, the one issue that most bothers Israelis: housing and other costs of living that have increased a great deal in the six years of Netanyahu’s reign.

Therefore, Netanyahu shifted this campaign to his personal ballpark and the security domain.

The personal realm includes Netanyahu's arguments that he is personally persecuted by the left and subject to attempts to topple him. This claim is crafted to draw public attention away from his many failures and into the emotional sphere to provoke war between right and left. “We bet that Bibi [Netanyahu] is pulling Naftali’s strings” is now an inside joke in the Likud.

The second topic on which Netanyahu’s campaign centers is security. His war against Iran’s nuclear plans is still viewed as his strong point by the public, and not only the right, and that is the reason Netanyahu grasps at it with all his strength. His anticipated March 3 speech to Congress, which has not left the headlines for the past month, will address this issue. As far as Netanyahu is concerned, the speech has already achieved its goal for his campaign even before he gives it, while his many rivals are not able to generate discussions on substantive issues. Kulanu head Moshe Kahlon’s socio-economic platform was swallowed up by Netanyahu’s wars with the media, by the Israel Prize scandal (in which Netanyahu was accused of interfering with the selection of winners) and claims that his wife is being persecuted. Much like Kahlon, Herzog, who co-leads the Zionist Camp, is not able to promote an agenda or attract interest, while his party is being forced to follow the prime minister's footsteps.

Netanyahu, who is demonstrating impressive skills in the use of social networks, has so far succeeded in averting any important media-based political discussion on substantive issues. Without diminishing the importance of testimony regarding the wasteful personal habits of the Netanyahu couple, the current election campaign should focus on other issues: What exactly has Netanyahu done in his six years as premier? Why does the socio-economic level of so many Israelis continue to deteriorate? And what is the significance of the lack of a diplomatic horizon and almost yearly rounds of violence?

But the media and the social networks are very preoccupied with Netanyahu’s video clips. After the “Bibi Sitter” clip (which was banned for portraying his rivals as children), another clip, in which Sara Netanyahu and her interior designer Moshik Galamin expose a residence in sore need of renovation, has entered every home. It doesn’t even matter anymore how ridiculous and disaffected the video is — the bottom line is that it managed to seize control of the public agenda and ward off attempts to deal with real issues.

By contrast, the public agenda in the 2013 election campaign was dominated by issues surrounding the cost of living, housing and drafting the ultra-Orthodox. Socio-economic issues make up Netanyahu’s soft underbelly. That was true for the 2013 elections, and it remains so now. But the social justice protest movement is still alive in the Israeli public and it will also affect these elections. Netanyahu is aware of this and works to minimize its influence as much as possible.

A study published Feb. 22 in Haaretz proves the success of the prime minister’s campaign strategy. The study conducted by Ifat Media Analysis probed media coverage in January and February and discovered that the media focuses these days on Netanyahu and neglects core security, economic and social issues. It also emerged that the scope of coverage received by Netanyahu (whether positive or negative) is about a third of all the political items. Herzog, by contrast, lagged behind and appears in only about 10% of the political items.

In this respect, there is no symmetry between the parity in electoral mandates (as predicted by the polls) of the Zionist Camp and the Likud and media exposure. Herzog, it appears, has been unable to produce an equal race in the media. This ought to worry Herzog and the Zionist Camp, as it proves that the public is not significantly exposed to an alternative agenda. It is unreasonable that a candidate for the premiership should lag behind in media references on the eve of the election.

The weak-appearing political alternative to Netanyahu is unable to shift the discussion to the core issues and focus interest on Herzog. For example, the public is not generally familiar with the Zionist Camp’s diplomatic program. Even though the plan was publicized, no one seems to be talking about it. By contrast, Netanyahu’s recalcitrance regarding diplomatic negotiations is well known and obvious, but he succeeds in shifting discussion away from it.

The public receives no information on the differences between the Herzog-Livni leadership and Netanyahu regarding diplomatic negotiations. Plus, Livni was part of Netanyahu’s government until a few months ago and she herself has indicated that Palestinian President Mahmoud Abbas is not a partner.

Moreover, the cooperation of higher-ups in the Zionist Camp with right-wing parties over the years has dimmed the diplomatic differentiation between right and left that had been more evident in the past.

In the 1992 elections, the late Prime Ministers Yitzhak Rabin and Yitzhak Shamir presented strictly different diplomatic perspectives. The Labor campaign “We are sick of corruption!” added another layer, emphasizing to even a greater extent the political gap between both parties. The ruling party at the time, the Likud, lost control over the public agenda.

Obviously, Netanyahu's control over the agenda does not promise him victory. He faces a political system that is sick of him, and it is altogether possible that his detractors will join together to topple him. But if so, it will be the result of a confluence of common interests, and not an alternative agenda that sweeps away an entire public.