As political parties try to put tribes under their sway for electoral gains, Iraqi tribes have become “a state within a state,” where laws are powerless over their armament, authority and power. 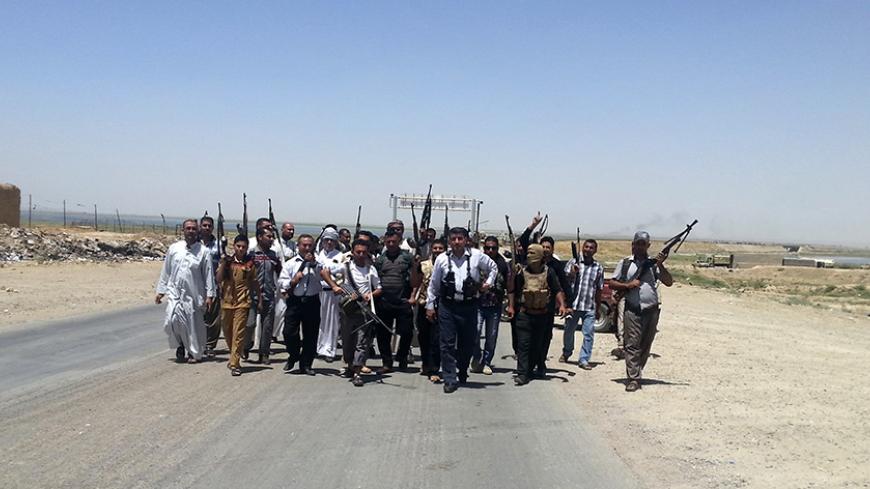 Equipped with various firearms, convoys of tribal members can be seen across Iraq, in defiance of the laws prohibiting the firing of guns into the air. This causes major economic losses, while the country is going through a harsh economic crisis because of the decrease of oil prices and the expenses of the war against the Islamic State (IS).

Government agencies and citizens consider this phenomenon “uncivilized,” as it puts the lives of many into jeopardy. Others consider it “carelessness” to civil peace and civic life.

Sheikh Abdul Hussein al-Amir, a leader of Albu Sultan tribe that is widespread in central Iraq, told Al-Monitor that this is “a social custom that reflects well-established traditions and adds prestige to the tribe.”

A video posted on YouTube on June 27, 2013, shows the funeral procession of a tribal leader, Abu Karim Hamid al-Khalaf al-Mazkour al-Jubeir, who hailed from al-Jubeir tribe in Basra, during which participants were firing guns, making the agricultural area in which they were walking seem like a war zone.

In Iraq’s southern Babil province, Al-Monitor attended the Albu Sultan tribal march Feb. 1 during the funeral of members of the tribe, amid heavy shooting normally only heard in the battlefield.

The tribal march took place over 2 kilometers (1.2 miles), in which hundreds of people rallied and filled the streets of the city of Hamzah south of Hillah.

The shooting from rifles, pistols and machine guns continued for nearly two hours. A youth carrying a machine gun that seemed taller than he was stood there, while an assistant by his side and pushing people away was carrying the magazines. He pointed the muzzle toward the sky, and emptied the 30-round magazines in three minutes, while smoke from the shooting filled the surrounding area.

Sheikh Ali Hassan, who participated in this tribal march, told Al-Monitor, “The tribe usually holds funerals of its members with a torrent of shots and tribal chants glorifying the deceased and enumerating the qualities of the deceased.”

The local population calls these armed marches “arada,” which they prepare a few days before, along with ammunition and weapons, and identify who will be firing guns.

Sheikh Majid al-Kallabi told Al-Monitor, “The arada has its own rules that the tribal leader is keen to apply, as he assigns who may use firearms to avoid any accidents.”

In the western, central and southern parts of Iraq, tribes are accustomed to using firearms on sad occasions, such as the death of a sheikh, or of a well-known tribal figure, as well as on more joyous occasions, such as circumcision ceremonies and weddings, which are Iraqi ancient social traditions.

The fragmentation of the Iraqi state after 2003, the looting of weapons from former Iraqi army bases and the lack of control over the borders with neighboring countries have led to an increase in the number of weapons among the local population, particularly the tribes in rural areas.

Ali al-Jubouri, a security officer in Iraq, told Al-Monitor, “These weapons are a real problem and are causing harm to civil peace.”

Tribal battles involving bombers and mortars erupted in northern Basra on March 11, 2014, between the Bani Malik and the Al-Boubkheet tribes, causing many deaths and injuries.

Hassan Sayyed Salman, an Iraqi politician who once served as chairman of the Board of Trustees of the Iraqi Media Network, told Al-Monitor, “One of the reasons behind the growing armed tribal phenomenon showing their weapons without any legal deterrent, is that some political parties have used the tribes as a military or political force that supports them and their projects.”

He added, “Although Iraqis have condemned this phenomenon, it has spread, killing and injuring dozens of people on celebratory occasions.”

As a sign indicating that the tribal role has grown bigger in politics, former Prime Minister Nouri al-Maliki formed tribal support councils in 2007, and showered them with money and weapons. Iraq’s current prime minister, Haider al-Abadi, has halted paying the salaries of these tribal councils.

In a phone interview with Al-Monitor, Sabah Kadhim, an author and researcher in social affairs and Iraqi tribes, said, “This phenomenon has become widespread and is threatening civil peace.” He called for “the imposition of financial penalties on the violators, and the enforcement of the law.” He added, “I do not see an end to the phenomenon in the near future.”

On Jan. 26, Abadi announced he would take “deterrent and urgent measures to prevent the firing of guns during events and to hold those responsible to be accountable, because they are terrorizing citizens and causing victims and injuries.”

In November 2014, the religious authority in Najaf called for “avoiding the shooting of firearms during events, such as during the funerals of the deceased in battles against [IS].”

Mohsen Lafta, an independent Iraqi author and a researcher in social affairs, told Al-Monitor, “The roots of the phenomenon of firing guns goes back to old beliefs that are connected to the nomadic culture, and are based on showing off with the largest number of weapons and men.”

He said, “For many Iraqis, firearms are the decisive factor in conflicts between rival tribes. Every tribe is showing its strength to survive, and trying to avoid suffering and being humiliated in a society where men fight over gains, land and water.”

He added, “As firearms were invented, the dream of the Iraqi man has been to possess a weapon, as it is correlated with feelings of strength and survival.”

Hani Ashour, an Iraqi politician and author, told Al-Monitor, “The current phase, which is experiencing a social militarization, has caused firearms to seep into the tribes, and the growing role of tribes in society has caused them to compete with each other and to seek to show their force through firearms.”

For his part, Ahmed Jabbar Gharb, who follows social issues in Iraqi newspapers, said, “The phenomenon of firing guns is the result of backwardness and ignorance. It has moved from the countryside to the city, because of the cities’ ruralization policies, which were adopted by former Iraqi President Saddam Hussein's regime, and which still remain in place.”

The attempt by governmental and political parties to recruit tribes for political events, to acquire votes in the elections and rally people in favor of one party or another, has caused the tribes to become “a state within a state,” where laws are powerless over their armaments, authority and power.