Officials in Iraq's Anbar province are concerned about the increase in revenge operations carried out by popular mobilization forces. 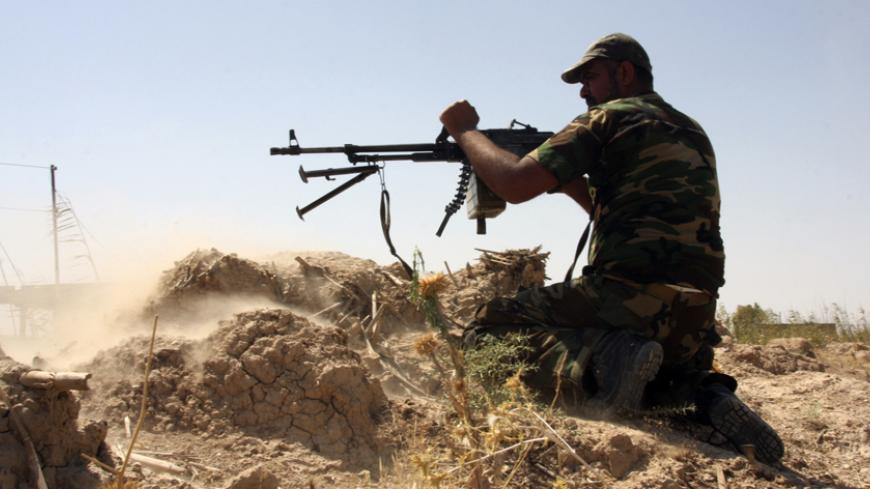 An armed Shiite volunteer from the Mahdi Army, loyal to radical cleric Muqtada al-Sadr, clashes with Islamic State militants outside the city of Tikrit, Sept. 8, 2014. - REUTERS

Officials in Iraq's Anbar province are concerned about the members of popular mobilization forces carrying out sectarian revenge operations against the residents of the province, 80% of which falls under the control of the Islamic State (IS).

The popular mobilization forces formed following the fall of Mosul on June 10, 2014, after supreme Shiite religious authority Ali al-Sistani announced the “righteous jihad” fatwa. The forces brought together a number of Shiite militias, some of which receive direct support from Iran.

On Feb. 6, members of the popular mobilization forces killed two Anbar tribesmen in al-Sajariyah in eastern Ramadi, stirring the anger of the local Anbar government and the tribes supporting the security forces.

Anbar's popular mobilization forces comprise about 3,000 members who are mostly concentrated around Amiriyat Fallujah, in addition to several military points where Iraqi security forces are stationed.

Azal al-Fahdawi, a member of Anbar’s provincial council, told Al-Monitor, “Many tribal fighters in Ramadi and officials in the province are wishing that the popular mobilization would join and help us in our fight against IS. However, if there were revenge operations or some provocations by the popular mobilization, then it will result in additional unnecessary problems.”

Fahdawi added, “The popular mobilization’s movement is limited in Anbar. Its presence only extends to the areas of al-Sajariyah, al-Hawz and al-Jazira in Ramadi, and the Yabani [Japanese] Bridge from Saqlawiyah’s side in north Fallujah, since these are the hotspots and most dangerous areas.”

Naim al-Qaoud, the head of the Bunemer tribes, which fight alongside Iraqi security forces, told Al-Monitor, “There are no problems with the popular mobilization in Anbar.”

Around 500 of Qaoud's tribesmen were killed by IS. “The conflicts that occurred in certain areas might have been with members from a different group and not from the popular mobilization,” he said.

“There is coordination between the tribes and the popular mobilization forces,” he said, but described it as, “not of the required level.”

He added, “There are men in Anbar who are capable of cleansing it [from terrorism]. I am not saying that I am against the popular mobilization, but there are men who volunteered in Anbar and they are capable of liberating it from IS but they need reinforcements.”

In reality, the parties that are welcoming the popular mobilization in Anbar do not have any other options to face IS’ expansion throughout the province, in addition to its constant attempts to take over the city of Ramadi, Anbar’s center, where the local government is situated.

The demand to provide reinforcement for Anbar’s tribes to eliminate IS has become persistent, especially since the majority of tribal parties complain about their lack of weapons and ammunition. IS, meanwhile, was able to take possession of the Iraqi army's heavy weaponry as the army left these areas.

In a statement following the killing of the two Anbar tribesmen in al-Sajariyah, President of Anbar’s Provincial Council Sabah Karhout said, “The council did not ask the popular mobilization to come to Anbar. We asked the central government and leadership to support the province to put an end to strife and eliminate IS.”

Al-Monitor was able to obtain a copy of Karhout’s statement, in which he asked the Ministry of Defense for “all the forces that come to Anbar to be under the umbrella of the government and security forces in Anbar,” noting that “there is a revolution in Anbar by its tribes against IS but it needs certain fundamental elements.”

“The central government will be held responsible for any security deterioration that might occur in Anbar, due to the lack of weapons provided for tribes and security forces,” he said, stressing the need to “increase Anbar’s share in weapons and ammunition reinforcement to face the threat posed by the terrorist group.”