The law to establish the National Guard forces in Iraq raised the ire of Kurds in northern Iraq who would rather remain in full control of their areas. 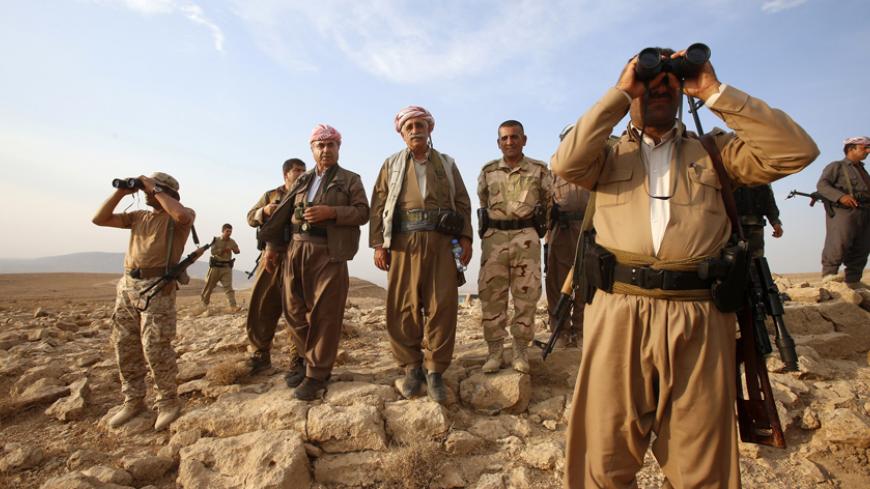 ERBIL, Iraq — A law to found a paramilitary National Guard force in Iraq to assist in the fight against the Islamic State (IS) has put Kurds at loggerheads with other communities in northern Iraq.

Kurds strongly reject the formation of any rival armed units in the parts of northern Iraq that are known as disputed territories to which Kurdish, Sunni Arab, Turkmen and Shiite Arab populations lay claims. Most of the disputed territories are now under the control of Kurdish peshmerga forces.

Members of the other communities want to play a role in the security arrangements of those areas and hope that the National Guard will become a vehicle for their return to the security scene in disputed territories.

But fearful that the birth of other armed groups can weaken their control over those areas amid a difficult war with IS and give rise to chaotic outcomes, the Kurds have resisted the idea of other competing forces in the disputed territories.

Shakhawan Abdullah, a Kurdish member of the Iraqi parliament, told Al-Monitor that the law has to make it clear that the National Guard will not be established in Kurdish-controlled areas. “The National Guard law should stipulate clearly that the peshmerga is in charge in the disputed territories and that’s it,” said Abdullah, a Kirkuk deputy in the Iraqi parliament’s security and defense committee.

Iraq’s Cabinet passed a draft law on Feb. 3 that paves the way for legalizing the status of disparate Shiite armed groups and organizing tribal Sunni forces under the umbrella of a National Guard force.

The National Guard draft law was scheduled for a first reading by Iraqi members of parliament during a meeting on Feb. 10. But deep disagreements regarding certain items of the bill led the speaker to delay discussions indefinitely.

Grappling with a resilient and formidable foe in the form of IS, the Iraqi government is desperate to use the National Guard as a key element to turn the tide against the jihadist group. There appears to be nationwide support for the creation of the National Guard as far as fighting IS is concerned in the areas that the group controls in northern and central Iraq.

While Kurds also support the idea of the National Guard to fight IS in other parts of the country, they do not want those fighters in areas they run such as the Kurdistan Region and the disputed parts of Kirkuk, Ninevah, Salahuddin and Khanaqin provinces under their control.

In particular, the oil-rich province of Kirkuk has been at the center of the controversy surrounding the National Guard.

In an interview published Feb. 8 in the London-based pan-Arab daily, Al Hayat, Iraqi Kurdistan President Massoud Barzani said, “We are not in need of the Popular Mobilization [forces] and will not allow any forces to enter Kirkuk.”

Popular Mobilization refers to the armed Shiite groups formed after the collapse of several divisions of the Iraqi army when IS attacked Mosul and other main areas in northern and central Iraq.

After the Iraqi army forces were routed by IS militants last June, the army’s 12th Division abandoned its bases in Kirkuk. Kurdish peshmerga forces moved swiftly and set up shop in the areas of the province where Kurdish populations reside, including the city of Kirkuk and the rich oil fields in its environs.

But Sunni Arab leaders who are not residing in IS-controlled territories demand the formation of a Sunni force as part of the National Guard.

“Sunni Arab tribes want to be part of the forces defending Kirkuk alongside the peshmerga,” Ismael Hadidi, the chief of the Sunni Arab Hadidi tribe, told Al-Monitor. “Daesh [IS] poses a huge threat to us all.”

Hadidi, who also served as Kirkuk’s deputy governor for a number of years after the US-led invasion in 2003, said that the structure of the National Guard forces and their command structure must be clearly defined. He added that in the event that the National Guard forces are established in Kirkuk, there should be “coordination and a joint command” between them and the peshmerga forces.

Another draft law aimed at relatively easing the restrictions placed on the return of the former members of Saddam Hussein's outlawed Baath Party to public life is expected to be discussed alongside the National Guard bill. The Sunni Arabs want a board that was in charge of identifying and disqualifying Baathists from engaging in public life to be dismantled as they accuse it of practically launching a witch-hunt campaign against Sunni Arabs.

“There are many professional and patriotic officers from the former Iraqi army [under Saddam Hussein] who we can draw on their capabilities,” Hadidi said.

While the majority of Kurdish members of the Iraqi parliament and Kurdish politicians in Kirkuk appear to be against the formation of National Guard units in Kirkuk, there is already some measure of cooperation between the Shiite Popular Mobilization units.

IS launched a multi-pronged assault on Kirkuk city on Jan, 29, but after two days of intense fighting, Kurdish forces pushed back IS militants, preventing them from reaching the city. Following those attacks, scores of Shiite armed elements reportedly set up shop south of Kirkuk city with the stated aim of assisting the peshmerga forces in defending the city. There were some Popular Mobilization forces in Kirkuk even before Jan. 29.

There appears to be a rift in the stance of the two dominant Kurdish parties, the Kurdistan Democratic Party (KDP) and the Patriotic Union of Kurdistan (PUK), in terms of their approach to the Shiite armed groups.

Whereas the KDP, led by Barzani, is adamant in rejecting the presence of Shiite armed groups in areas under Kurdish control, the PUK, led by former Iraqi President Jalal Talabani, appears to have a lukewarm position. Peshmerga forces affiliated with the PUK have cooperated with the Shiite armed groups in liberating areas such as Amerli in Salahuddin province and Jalawla in Diyala province.

Abdullah, the Kurdish member of parliament, says that the Shiite groups have violated their earlier agreements with Kurds to leave the Kurdish-controlled areas after Amerli was recaptured from IS in September and Jalawla in November last year.

In a visit to Kirkuk on Feb. 7, Hadi al-Ameri, the head of the Badr Brigades, an Iranian-backed Shiite armed group, hinted at possible plans for cooperation between the Popular Mobilization units and the peshmerga forces.

“Kirkuk is of high importance and has oil and gas resources as well as power stations,” Ameri said following a meeting with Kirkuk Gov. Najmaddin Karim. “We have to act toward ending the threat posed by Daesh [IS] through high coordination with the peshmerga forces and the governor, and this requires swift action.”