Nuclear negotiators lean in as clock ticks on Iran deal

As the March deadline for a nuclear deal looms, Iran and the P5+1 are down to deliberating enrichment capacity and sanctions relief as well as the duration of a final deal. 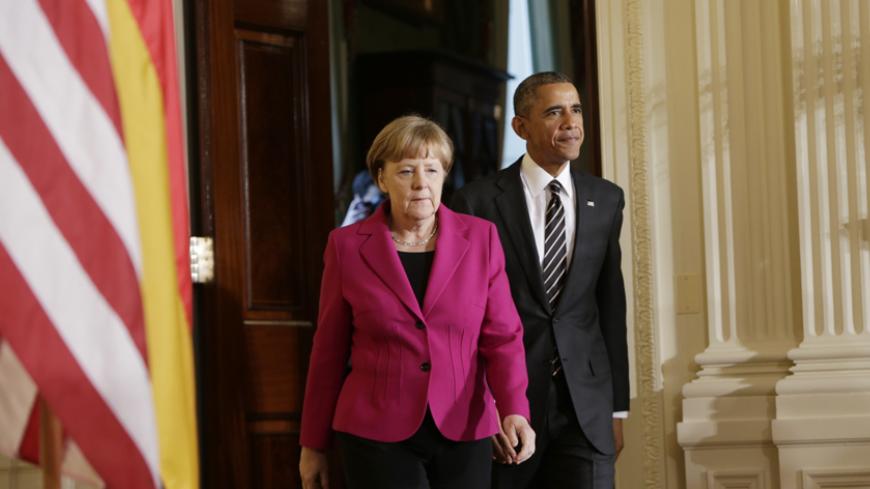 US President Barack Obama and German Chancellor Angela Merkel arrive to address a joint news conference in the East Room of the White House in Washington, Feb. 9, 2015. - REUTERS/Gary Cameron

WASHINGTON — Iran and its negotiating partners are approaching the decisive phase in their prolonged discussions over a nuclear deal and have discussed several ways in which Iran’s enrichment capacity could be curbed to meet Washington’s demand for a one-year breakout, sources briefed on the negotiations say.

Amid a sense of urgency to see if Iran and the five permanent members of the UN Security Council plus Germany (P5+1) can reach a political agreement for a nuclear deal by the end of March or risk a likely congressional vote on new Iran sanctions, US and Iranian negotiators are approaching their bottom lines as they continue to haggle over three key elements of a final deal: enrichment capacity, sanctions relief and duration.

In recent meetings, the United States has presented Iran with a few different ways an acceptable enrichment capacity could be achieved in a final deal that would meet Washington’s requirement for a minimum one-year “breakout” — the amount of time it would take Iran to produce enough enriched uranium for a nuclear bomb. As they wait to see if Iran agrees to move forward with one of the proposed formulas, Iran is pressing for earlier sanctions relief in a deal. The two sides are also haggling over the duration of a deal, with the P5+1 reportedly asking for 15 years, and Iran for a shorter deal.

“The issues now are sufficiently narrowed and sufficiently clarified, where we're at a point where they need to make a decision,” President Barack Obama said at a press conference with German Chancellor Angela Merkel Feb. 9.

“We … the P5+1, supported by a coalition of countries around the world, are presenting to them a deal that allows them to have peaceful nuclear power but gives us the absolute assurance that is verifiable that they are not pursuing a nuclear weapon,” Obama said.

Iran’s Supreme Leader Ayatollah Ali Khamenei said Feb. 8 that he would be amenable to a compromise if he considered it a good deal. But he said he did not agree with the two-phase approach to reaching a deal that had been adopted by the P5+1 and Iran, and said he would need all the technical details to sign off on a final deal.

“I agree with the continuation and the progress of the negotiations and clinching a good deal,” Khamenei said at a Feb. 8 meeting with Iranian air force commanders. “The Iranian nation would not definitely disagree with a deal that would encompass respect [for the nation].”

The Iranian negotiating team “appears to be focused on reaching a comprehensive deal,” Suzanne DiMaggio, a US-Iran expert at the New America Foundation, told Al-Monitor Feb. 12.

The key outstanding issue for Iran’s negotiators is sanctions relief. “Two major concerns are whether the Obama administration has the power to terminate the implementation of sanctions and the sequence and timing of the lifting of UN sanctions,” DiMaggio said.

“Both sides have moved in their positions during the negotiation process,” DiMaggio said. “But it is not clear if the US can move enough on the sanctions issue for the Iranian side to feel they have a good enough deal to take to Khamenei.”

Former US officials who have worked on Iran said they were not entirely certain what to make of Khamenei’s remarks and his newly expressed opposition to a two-stage agreement.

“This is where the opacity of Iran becomes very frustrating,” Suzanne Maloney, a former State Department Iran adviser, told Al-Monitor Feb. 10. “Somewhere there are meetings, white papers, NSC processes.” She mused, “Is there dysfunction in the Iranian system? What is the strategy? I don’t have an answer.”

Former US-Iran arms control negotiator Robert Einhorn said the Iranians until now have been hung up on not reducing the number of centrifuges they are currently operating. But he said there may be some give in their position.

“There are trade-offs on all the issues; they are all related,” Einhorn told Al-Monitor Feb. 10. “Duration is tied to level of [enrichment] capacity, is tied to the stockpile limits, is tied to research and development.” He added, “Some give on one issue may get you something on another issue.”

Einhorn, now with the Brookings Institution, continued, “I think actually they may be closer on sanctions relief than they are on the main enrichment issues. Because I think the Iranians are realistic to know that sanctions can’t be terminated without a vote of Congress, and that is not going to come before the [International Atomic Energy Agency] finds them in compliance.”

There is more than one way to get a one-year breakout timeline, but all of them would require a significant reduction in the number of centrifuges Iran is currently operating, said Daryl Kimball of the Arms Control Association. “The formula for increasing the time for Iran to produce material for one bomb involves a number of different limits,” Kimball told Al-Monitor. “One of the important ones is the number of centrifuges. But you can’t look at any one thing in isolation.”

In addition to the number of centrifuges, an “agreement must address a number of elements of Iran's overall enrichment capacity in order to reach the 12-month theoretical ‘breakout’ objective.”

Other elements that must be addressed in an agreement on Iran's enrichment capacity include “barring Iran from enriching uranium above normal power-reactor grade," Kimball wrote in a Feb. 9 Arms Control Association issues brief. "Putting in place verifiable restrictions that block Iran from manufacturing advanced centrifuges for production-scale enrichment …; significantly reducing the number/capacity of Iran's 10,200 operating IR-1 centrifuges for several years; reducing the amount and form of low-enriched uranium stockpiled in Iran; and verifiably disabling the approximately 9,000 centrifuge machines that are now installed but not yet operating.

“There are several possible ways these variables can be combined to increase the time that it would take Iran to amass enough highly-enriched uranium for a nuclear weapon,” he wrote. “For example, by reducing Iran's current operating enrichment capacity by half, combined with a significant reduction in the size of Iran's low enriched-uranium stocks and conversion to more proliferation-resistant oxide form (or removal to a third country), the time it would take Iran to produce enough weapons-grade enriched-uranium gas for one nuclear weapon would grow to nine to 12 months.”