A new legal provision to facilitate police action against government opponents in Turkey has victimized scores of people in a short period of time. 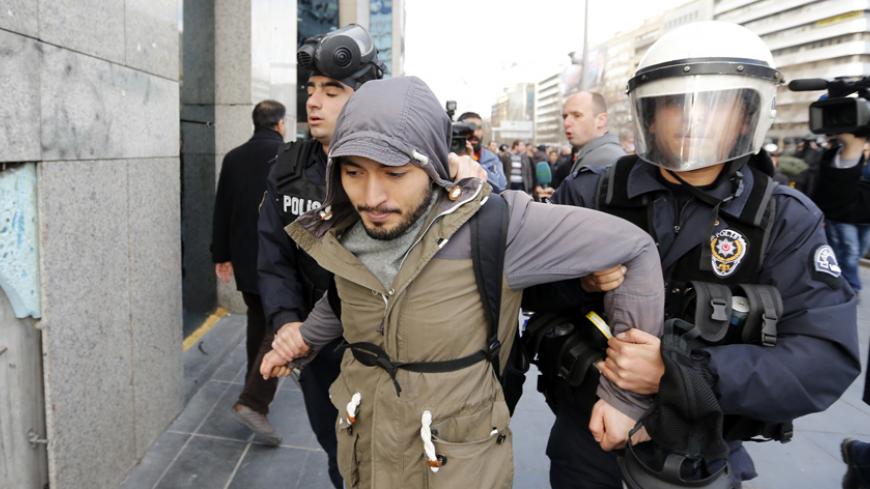 An anti-government protester is detained by riot policemen during a demonstration in Ankara, March 12, 2014. - REUTERS/Umit Bektas

Rattled by the Gezi Park protests in 2013 and further frightened by street unrest with the Kurdish riots over Kobani in October, Turkey’s government has facilitated detentions and pretrial arrests through a legal amendment that removed the criteria of “strong suspicion” and “substantial evidence” and replaced them with “reasonable suspicion.” The amendment has led to thousands of detentions or pretrial arrests in a short period of time.

Jurists contacted by Al-Monitor commented that the “reasonable suspicion” clause exists also in European countries and that the problem lies not in the clause itself but in the absence of any definition of what “reasonable” means. Instead of making an objective legal definition, the decision on what constitutes a “reasonable" suspicion is left to the police.

Another major problem is that judges issue detention or pretrial arrest rulings on the basis of what the police say and provide no information detailing the suspicion. This means that a lawyer looking at an arrest ruling knows nothing about what reasonable suspicion has led to a client’s arrest. In some cases, two people are detained on the same grounds, but one ends up in jail pending trial, while the other is released. The rulings only say that a person has been detained or arrested pending trial on the grounds of reasonable suspicion, without specifying what indications have spawned that suspicion. A tip-off for a plan to hold a demonstration in support of Kobani, for instance, is considered a "reasonable suspicion" and a search order is easily issued.

The amendment had sparked an outcry among jurists that it would open the door to arbitrary action. And the jurists proved right. Turkey’s press nowadays is increasingly reporting stories about police action on the grounds of “reasonable suspicion.” Here are some examples:

In a story headlined “'Reasonable suspicion' first used in Denizli,” the Radikal daily reported: “The legal amendments package, which replaced the 'strong suspicion' condition with 'reasonable suspicion,' has been used for the first time. Acting upon a prosecutor’s request, a judge has ordered the confiscation of flyers announcing a gathering of the United June Movement.”

Another report in Cumhuriyet said: “Reasonable suspicion beating: Police stopped a 24-year-old man as a 'reasonable suspect' outside his home in Kadikoy and beat him up.”

Milliyet reported: “The first detentions under the 'reasonable suspicion' law were made [against the Gulen community]. The detained journalists, policemen and scriptwriters are accused of fabricating evidence against the Teshiye group and seeking to usurp the state’s sovereignty.”

And the Evrensel daily reported, “Driving people from Kobani has become a 'reasonable suspicion.' A citizen named Cemal Yildiz was detained in Osmaniye, along with two wounded people from Kobani, whom he was driving from Suruc to Adana.”

On Dec. 30, police detained journalist and news presenter Sedef Kabas after searching her home over a Twitter post in which she wrote: “Don’t forget the name of the judge who made the non-prosecution decision in the Dec. 17 [corruption] probe.”

The Turkish Journalists’ Association (TGC) condemned Kabas’ detention, saying, “Our colleague’s detention over a Twitter message comes as a fresh example of attempts to intimidate journalists. It also deepens our suspicions that the 'reasonable suspicion' clause will be used mostly against journalists.” The TGC released a striking figure on journalists who have faced judicial action in recent months: “Close to 70 journalists who reported on the Dec. 17-25 corruption probes against the government are currently on trial in 120 court cases.”

The “reasonable suspicion” clause is used most recklessly against the Kurds, something the Turkish media are reluctant to notice. A total of 2,495 people have been detained since Kurdish demonstrations erupted Oct. 6 to protest the Islamic State’s offensive on Kurdish-controlled Kobani in northern Syria and Ankara’s bias in favor of the radical group. Though the detentions began before the law was changed, the amendment has since facilitated things for the police.

In a Dec. 29 statement, Meral Danis Bestas, deputy co-chair of the pro-Kurdish People's Democracy Party (HDP), said that 2,495 people had been detained since Oct. 6, with 700 of them sent to jail pending trial. About a third of those are minors, including 40 held in the prison in Diyarbakir, the largest city of Turkey’s mainly Kurdish southeast. Younger children who cannot be legally detained have been profiled by the police as “children dragged into crime.” On Dec. 26, it emerged that the Diyarbakir police department had notified the Education Ministry to initiate sanctions against 200 students, including children as young as 8 or 9.

Bestas said that children are being detained outside their homes or in the streets on the grounds of “reasonable suspicion.” She added, “The sole ground for those detentions and [pretrial] arrests is the police’s unilateral reports. … We know that those who are forcefully detained on the street, at home or at their workplaces without any real justification and under the freakish legal provision called 'reasonable suspicion' are subjected to this treatment with the sole purpose of intimidation. … Victimized by the state, children are being put in prison recklessly and without respect for any law, and their lives are being darkened at the hands of the state."

According to the HDP, medical reports have proven that children face intimidation and violence in custody. The HDP parliamentary whip, Idris Baluken, brought the issue to the parliament’s agenda in a written question to the government. On Dec. 17, the main opposition Republican People’s Party (CHP) petitioned the Constitutional Court to cancel the legal amendments package that introduced the “reasonable suspicion” clause, which has managed to victimize so many people in such a short time. A week later, the court made a decision to take up the issue in the coming days.

The government, which had bragged about scrapping the “reasonable suspicion” clause as part of reforms to align Turkish law to European Union norms, has today come to a point of relying on provisions even worse than the old ones in the name of its own survival. In just one month, the security forces — reluctant to abandon old habits and already struggling to adapt to progressive reforms — have clearly shown how outrageously the “reasonable suspicion” clause could be used. Hopes are now pinned on the Constitutional Court. Yet, no one can guarantee that the government will not rush a new legal arrangement to give itself maneuvering room.