Journalism in Turkey is increasingly becoming a nightmare for foreign reporters, too, while the president personally leads psychological lynching campaigns. 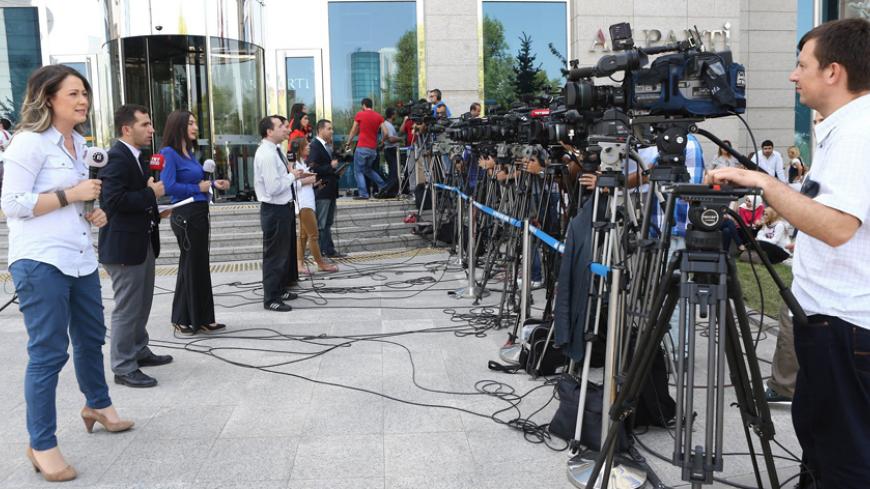 Television journalists report from outside the headquarters of Turkey's ruling Justice and Development Party, shortly before the country's president-elect announces the name of his party's new chairman, in Ankara, Aug. 21, 2014. - ADEM ALTAN/AFP/Getty Images

Back in the days when Turkey was touted as a model for the Muslim world, boasting a booming economy despite the global crisis, it was home to many foreign journalists full of praise for the country. With the Arab uprisings, more foreign journalists arrived in Turkey, as cities like Istanbul, Hatay and Gaziantep became their regional bases, just as Beirut once used to be.

Foreign journalists and local ones employed by foreign media enjoyed high esteem in the days they lauded the Justice and Development Party (AKP), but when they began referring to touchy subjects they became spies overnight in government eyes.

An increasing number of journalists have faced character assassination, with President Recep Tayyip Erdogan setting the tone in public speeches. Those targeted by Erdogan are instantly flooded with threats and insults on social media. As a result, some have been recalled from Turkey and others have tried to keep a low profile. Many worry about being denied residence permits.

Most recently, Dutch journalist Frederike Geerdink, who closely follows the Kurdish question, was detained last week in mainly Kurdish Diyarbakir, where she has lived since 2012. Many expected she would return home, but Geerdink is determined to stay. “Of course, I have a country to go to, if I’m deported. But I love Turkey. I’m not leaving the hospitable, genial and caring people of this country. I’m not going anywhere,” she told Al-Monitor.

Police searched Geerdink’s home and took her in for questioning on charges of praising terrorism and defaming the Turkish state on Twitter. She was lucky, though, as Dutch Foreign Minister Bert Koenders happened to be in Ankara and his intervention led to Geerdink’s release in several hours.

While she was being grilled by anti-terror police, Erdogan was preaching to the world on press freedom. “Nowhere in Europe or elsewhere is the press freer than it is in Turkey. Just try to attack presidents there if you can,” he said. Geerdink has vowed not to bow down to censorship and to continue writing her mind.

Many threats, no action

Amberin Zaman, The Economist’s Turkey correspondent and a columnist for Al-Monitor and Turkey’s Taraf daily, has faced continuous attacks from AKP trolls since August, when Erdogan called her a “shameless woman” who should “know her place” over remarks made in a television program. In response to a comment that a large portion of Turkish society fails to question its political leadership, Zaman had said, “Isn’t it a bit hard to expect this is in Turkey, in a Muslim country? Islam, after all, is a religion that centers not on the individual but the community.”

Ever since, AKP supporters have been threatening and insulting Zaman whenever they get annoyed by what she says. A Twitter account was suspended after tweeting to Zaman, “I will be the one to slaughter you, infidel,” after she reported that the Islamic State (IS) might be planning to kidnap journalists in Turkey.

And what about the response of the security and judicial authorities? Have they taken any action over those posts that constitute crimes such as incitement, threat and hate speech? No. The offenders are untouchable because the first stone is being cast from the person on the very top.

Zaman told Al-Monitor, “Operating in Turkey has always been tricky for the foreign press. Throughout the 1990s, the Kurdish issue was a red line. I was detained by the police and the army numerous times while covering stories in the southeast for no other apparent reason than doing just that: my job. The army would use the government and the media to defame journalists, using much of the same language that we see today. The difference now is that the pressure is brought to bear directly by the democratically elected government and its propaganda sheets. The targeting of journalists is amplified by the social media. And it doesn't help when the targeting is coming directly from the very top, and by that I mean from the president.”

Der Spiegel reporter Hasnain Kazim went through a similar ordeal in May, when he covered the mine disaster in western Turkey that claimed 301 lives. A flurry of threats forced him to temporarily leave Turkey after he used a quotation from a miner as a headline. The miner, who used to vote for Erdogan, had said, “I would like to tell him now: Go to hell!”

Here is how Kazim recounted his experience to Al-Monitor: “This quote became the headline of the article because it put the feelings of the people at the mine into one sentence. This stirred the anger of many Erdogan fans. They started to spread via Facebook and Twitter that I, the correspondent, said Erdogan should go to hell. They ignored the fact that it was a quote. I received more than 10,000 threats via email, Facebook and Twitter. ‘We will cut your throat,’ was one of them. Many Twitter accounts that threatened me did not have any followers. So I assume that I was targeted in an organized campaign.

“The Turkish government was helpful in the sense that they did offer me personal security, but I refused. I cannot work as a journalist with bodyguards following me. Unfortunately, Turkish media picked the matter up in a wrong manner: Pro-government media also ignored that it was a quote while some journalists critical of the government celebrated me as their hero, which was also wrong because that suggested that it was my opinion and my quote. …

“I do feel safe, though I have to say that working as a journalist in Turkey is not easy. For me, as a foreign correspondent, I always have a government that is backing free reporting and, hence, me. I can always leave. For Turkish colleagues, life is much more difficult.”

Stressing that journalism is becoming a dangerous job in Turkey, Kazim went on: “Many of the threats were just copied, with all the wrong spellings and grammar. But I do think that some of the threats are real. We need to be careful. But retreat? No! If anybody thinks that threats like this can push us into self-censorship, they are wrong.”

Clarifying his earlier remarks that even the Taliban’s threats in Pakistan were not that severe, Kazim said, “What I wanted to say [was] this: Yes, the Taliban do threaten journalists. But they don't do it with a massive, orchestrated campaign as these AKP trolls did it.”

New York Times’ correspondent Ceylan Yeginsu, for her part, stirred anger with a September report about IS recruitment efforts in Ankara’s Hacibayram neighborhood. The paper had to remove from its website a picture of Erdogan leaving the Hacibayram Mosque that had accompanied the report. Pro-government dailies launched a smear campaign against Yeginsu and she received very serious threats.

In March, the Istanbul office of Germany’s ARD radio became the target of AKP demonstrators over its coverage of voice recordings leaked amid a corruption probe that implicated government members. Al-Monitor has learned that unidentified people left animal feces at the office’s door several months later.

The CNN’s Ivan Watson, for his part, was accused of being involved in an anti-government coup plot over his live coverage of the 2013 Gezi Park protests from Taksim Square. He is no longer reporting from his beloved Istanbul, but from Hong Kong. Erdogan, who had previously given interviews to Watson and invited him to trips on his plane, called the journalist a “flunky” and an “agent.”

Reporters of the BBC Turkish service have also been a target since the Gezi Park protests. To the attacks of officials and pro-AKP media, the BBC has responded with a broader coverage of Turkey and a stronger emphasis on social media.

Today’s Zaman reporter Mahir Zeynalov was deported to his native Azerbaijan in February after tweeting about Erdogan, even though he had a residence permit until March.

While foreign journalists have become wary of being denied residence permits and accreditation, the common complaint of Turks working for foreign media is that they are treated as spies.

Clearly, the situation reflects a disastrous deterioration in the state of press freedom in Turkey. Still, Erdogan, who has sued scores of journalists, argues the opposite.

But have the risks of journalism increased under Erdogan? They have.

Are foreign journalists threatened in organized campaigns by AKP trolls? They are.

Are some of those threats serious? They are.

Have the police offered protection to some reporters? They have.

Have journalists faced detentions and intimidation? They have.

Is everybody concerned about Turkey’s direction? Yes.

In short, their beloved Istanbul has begun to choke foreign reporters.