The Aegean Sea overheated in 2014 because of frequent mock dogfights between Greek and Turkish warplanes, which require serious diplomacy and confidence-building measures to calm down. 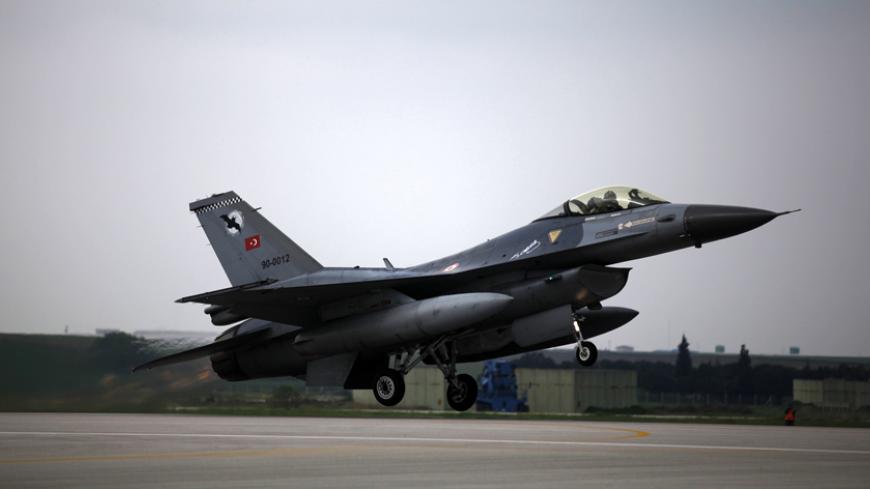 A Turkish air force F-16 jet fighter takes off from an air base during a military exercise in Bandirma, April 9, 2010. - REUTERS/Umit Bektas

Turkish military sources speaking to Al-Monitor on condition of anonymity said the number of mock dogfights between Turkish and Greek warplanes in 2014 has sharply increased compared to 2013. A report by the Greek Ekathimerini news agency confirmed the Turkish accounts. According to the agency, in just the first month of 2014, Turkish jets violated Greek airspace 1,017 times. That is twice the total number of violations in the first six months of 2013.

Perhaps because such news has become routine, reports of mock dogfights between Greek and Turkish warplanes over the Aegean Sea are now listed in the “Daily Activities” section of the official website of Turkey’s chief of general staff. For example, on Dec. 22 the Daily Activities section reported, “Two Greek M-2000/5 warplanes that took off from Greece’s Chios island committed a border violation of two minutes. They locked their radars for three minutes on Turkish warplanes sent to intercept, and Turkish warplanes responded to this harassment in kind.”

In Turkey, no matter how routine such reports may be militarily, the Turkish media still pay close attention to reports of mock dogfights. The same thing happened on Dec. 29. The report that Turkish warplanes successfully chased Greek planes from Turkish airspace became instant news.

What was the Greek version of the incidents? The same dogfight of Dec. 22 was reported in the “Violations” column of the official website of the Greek Military Command. According to the official Greek version, “Six Turkish aircraft committed one infringement of the Air Traffic Regulations (ICAO) and two violations of the Hellenic National Airspace. Two of the Turkish aircraft were armed. All violating aircraft were intercepted and identified, according to the relevant international rules and procedures.”

The Greek media also treated the incident with nationalist overtones, just like the Turkish media. According to a Greek media report, Greek warplanes that went on alert against Turkish violations “successfully” ousted the Turkish planes from Greek airspace.

The proper response to this question is somewhat complex. Without going too deep into technical details, this is how Turkey and Greece see the issue:

The question of sovereignty over the Aegean in simplest terms is the difference between Greek territorial waters of six nautical miles and the 10-nautical-mile airspace Greece claims. The conflict arises when Turkey recognizes the Greek national airspace over the Aegean as six miles and flies its planes within the 10-mile airspace claimed by Greece. Greece reacts strongly to such Turkish moves. In other words, most of the mock dogfights take place within the four miles Turkey claims to be international airspace.

Another major question between Greece and Turkey is the divergent views on whether military planes are required to file their flight data​ to established control centers when entering Flight Information Regions (FIR). According to Greece, Turkey is required to submit flight plans of military planes entering the FIR that Athens oversees.

Turkey rejects this Greek position and asserts that, according to Article 3 of the Chicago Treaty of 1944 that regulates international civil aviation rules, military planes are not required to inform of their flight plans when flying in international airspace.

According to Greek military authorities, flight data of Turkey’s military transport flights are never shared. This is provocative and against international aviation norms.

Turkey says Greece has been trying to use the FIR under control of Athens as an area of sovereignty. Greece frequently asserts that Turkey had not objected to the arrangement until 1975, when it suddenly decided that it doesn’t recognize the 10-mile Greek national airspace. Incessant Turkish military flights since then are threats to Greek national integrity and security.

According to a senior Turkish military official who spoke to Al-Monitor but did not want to be identified, the Greek claim of 10-mile airspace is not heeded by the aircraft of the alliance in NATO exercises held over the Aegean. NATO air forces that participate in those exercises consider, like Turkey, anything beyond the six-mile territorial waters of Greece as international airspace.

Another disputed issue is Greece’s declaration of a 300 square-mile area around their island of Limni as a “region of control.” Turkey says the Limni area of control over which all planes could fly with advance notification is in contravention of the International Civil Aviation Organization's rules, and that the Greek claim for civilian area of control is unnecessarily excessive.

What is the explanation for this mutual distrust? A retired Turkish air force general told Al-Monitor that it was the manifestation of a realistic attitude and military perspectives that took hold in the 1990s. The sharing of the Aegean Sea and the airspace over it is a zero sum game both for Turkey and Greece. The worrying trend of sharp escalation of airspace violations portend increasing risks from this zero sum game.

How will this issue evolve? There is one optimistic and one pessimistic prediction.

According to the optimistic approach, it is possible to find a solution first by easing tensions and then by initiating dialogue and introducing confidence-building measures between the two countries with constructive contributions from the EU and NATO. The direct telephone links between the foreign ministries and military high commands of the two countries was one such good step. Another important confidence-building measure is the first invitation to Greece to participate in NATO Tiger Meet 2015 exercises that will assemble a hundred planes from 11 countries in May 2015 in central Anatolia’s Konya province under the responsibility of Turkey.

Turkish officers feel that joint missions by Turkish and Greek air forces during exercises, training and NATO operational activities are crucial to better get to know each other and prevent misunderstandings.

The EU can also contribute to a solution. The EU’s “Single European Flight Information Region” (SEFIR) project could provide the basis for a solution. The SEFIR, if it materializes, means Turkey will henceforth see the EU as its interlocutor in the Aegean, not Greece. But according to ICAO rules, a regional accord is needed to make a new FIR arrangement and have the ICAO approve it.

According to the pessimistic outlook, Turkey can be left out of the SEFIR project and the United States may abandon its current neutral stand on Aegean airspace and back the position of one of the parties. Turkish officials are particularly concerned by Greece’s moves to make the issue an EU issue. Should the EU accept the 10-mile Greek airspace and the United States adopts the view, then the escalation of the problem is inevitable, Turkish officials say.

The conflict between Turkey and Greece over Aegean airspace is likely to continue for some time, unless both sides can focus on diplomacy instead of their military power based approaches. A solution to those almost weekly scares is doable with constructive contribution from the United States and the EU.