US, Iran struggle to speed up nuclear deal

US and Iranian negotiators worked intensively all week on a document to try to speed up a nuclear accord, but are still finding difficulties. 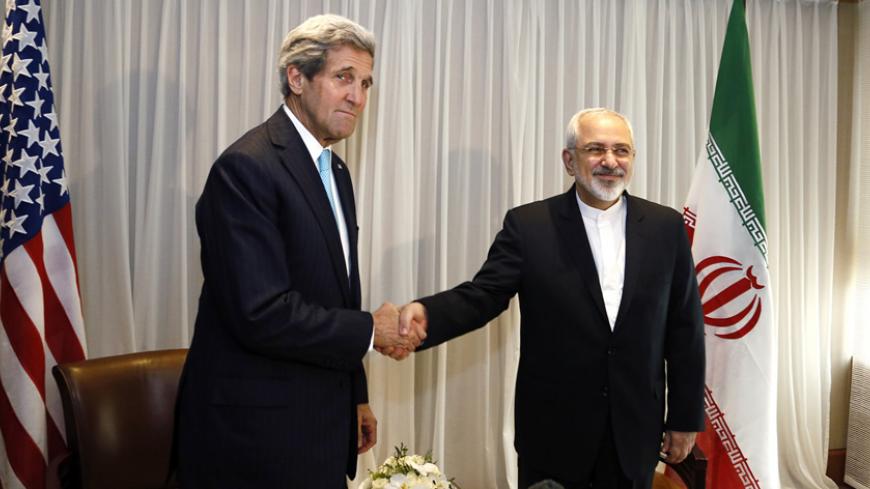 Geneva — US and Iranian negotiators have worked intensively all week to try draft a joint document to speed up nuclear deal talks, but are not expected to present the document at a meeting with six world powers on Jan. 18, diplomatic sources told Al-Monitor.

“Not this round,” a diplomat involved in the talks told Al-Monitor Jan. 17, in response to a query whether a document that US and Iranian negotiators have been working on in Geneva this week would be presented to the other members of the P5+1 (the five permanent members of the UN Security Council plus Germany).

The document the United States and Iranians have been working to draft is called the Principles of Agreement, diplomatic sources said, and is evidently an element of the framework agreement that Iran and the P5+1 have sought to complete by March.

Both US Secretary of State John Kerry and Iranian Foreign Minister Mohammad Javad Zarif, who met twice this past week in Geneva and Paris, earlier expressed the hope that this round of US-Iran consultations would help accelerate a final deal. Both sides see mounting domestic political pressures closing the space for prolonged negotiations, and have expressed increasing urgency at the need to reach a deal within the new deadline. But while each side praises the other's seriousness, professionalism and desire to reach a deal, there are still difficulties, even in drafting a document of broad principles. Among the most challenging issues to overcome to reach an accord are those that have been problematic for the past year: the size of Iran's enrichment capacity, the pace of sanctions relief and the duration of a final deal.

These past days of talks between the US and Iranian negotiating teams “are the most intense and focused since 2013,” Ali Vaez, senior Iran researcher at the International Crisis Group, told Al-Monitor Jan. 17.

“I think their goal is to draft a framework that clarifies the broad contours of a deal that could be presented by the Iranians and the Americans to the other members of the P5+1” at the meeting Jan. 18.

“The amount of progress that they would make to achieving that goal would determine the future of these negotiations,” Vaez said. “Given the pressure building up in Tehran and Washington, both sides are fully aware that the status quo is unsustainable.”

The US and Iranian negotiating teams, meeting in Geneva all week, were joined late Jan. 16 by European Union deputy foreign policy chief Helga Schmid, who held meetings with US and Iranian counterparts Jan. 17. Russia and Iran held a bilateral meeting on the evening of Jan. 17.

On Jan. 18, China and Iran are expected to hold a bilateral meeting in the morning, followed by a plenary meeting of the six world powers and Iran beginning at 11 a.m.

The parties are seeking to reach a framework agreement for a final deal by March, and have been hoping this meeting in Geneva could help accelerate that effort.

On Jan. 16, US President Barack Obama and British Prime Minister David Cameron argued forcefully against prospective new congressional Iran sanctions, saying such legislation would be a violation of the interim Iran nuclear deal, and could derail prospects for a negotiated agreement that ensures Iran does not seek a nuclear weapon.

“The question I had for members of Congress … is … what is it precisely that is going to be accomplished?" Obama told journalists at a briefing with Cameron at the White House Jan. 17, vowing to veto any Iran sanctions legislation if it comes to his desk.