In latest peace plans for Syria, Assad can stay 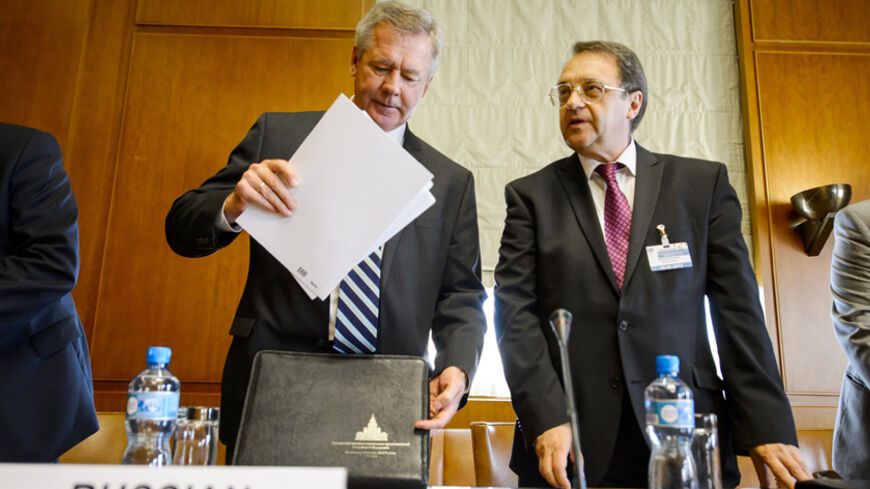 Mikhail Bogdanov (L) and Gennady Gatilov, both Russian deputy ministers for foreign affairs, prepare for a meeting on Syria at the UN's European headquarters in Geneva, June 25, 2013. - REUTERS/Fabrice Coffrini

A significant number of global and regional players have been forced to reconsider their strategies in Syria with the bloody civil war having morphed into a clash in which the main belligerents are now the most radical jihadists, represented by the Islamic State (IS) and Jabhat al-Nusra, and government forces.

Writing Nov. 14 in Foreign Policy, James Traub quotes David Harland, executive director of the Geneva-based Centre for Humanitarian Dialogue (HD Centre), which operates inside Syria, and his collaborator, Nir Rosen, as saying that “rebel commanders have come to accept that Assad’s departure cannot be a precondition for talks.” Rosen also suggested that the “rebels’ foreign backers, including the Saudis, have begun to reach the same conclusion.” On the basis of his discussion with his interlocutors, Traub contends that President Bashar al-Assad will “not be going any time soon, if at all.”

The heart of the matter is that retaining Assad and his regime is seen as a way to save the Syrian state itself, which could otherwise turn into a new Somalia. Harland succinctly summed up this argument: “Better to have a regime and a state than not have a state.”

The strategic shifts that have taken place in the Syrian theater of military operations, along with the apparent failure of various plans to settle the conflict, have given rise in recent months to some new initiatives by international players that have made a stir in the media. These include the Russian plan for an intra-Syrian meeting in Moscow; the plan by Staffan de Mistura, the UN secretary-general's special envoy to Syria, for “freezing” hostilities starting in one area; and the plan of local cease-fires developed by the HD Centre under Harland's leadership. Are the three plans in opposition to each other or can they be complementary? Which one has the best chance of being implemented? Will they lead to the resumption of the peace process that ended with Geneva II?

Moscow’s policy on the Syrian conflict initially stemmed from the need to reconcile the fighting parties. While putting forward its own ideas, Russia only rejected other peacemaking proposals if they began with the mantra “Assad must go.” Although the details of Moscow’s new initiative have yet to be made public, its main elements can be inferred from statements by officials and diplomatic contacts.

At an Aug. 20 news conference, Abbas Habib, coordinator for the Council of Syrian Tribes, had talked about a proposal by Mikhail Bogdanov, Russian deputy foreign minister and the president’s special representative for the Middle East and Africa, “to convene a preliminary conference, a consultative meeting in Russia, after which the intra-Syrian conference would move to Damascus, where the tribal sheikhs would also participate.” The sheikhs agreed to this. At the time, Habib stated that the “preliminary meeting could take place in Moscow, and then in Syria in an enlarged format.”

The idea was later further developed. The Russian Foreign Ministry's official website noted Nov. 20 that Bogdanov had received Qadri Jamil, leader of the Syrian opposition’s Popular Front for Change and Liberation. “An exchange of views [took place] concerning the Russian idea to conduct a consultative meeting of representatives of the Syrian opposition in Moscow, to promote the launch of an inclusive intra-Syrian negotiation process on the basis of the Geneva communiqué of June 30, 2012.”

Shortly before that, on Nov. 7, it became known that the former leader of the Syrian political opposition, Moaz al-Khatib, was scheduled to arrive in Moscow. According to Bogdanov, in Khatib's talks with Foreign Minister Sergey Lavrov, “the possibility of resuming intra-Syrian negotiations” was broached. “There was a very constructive discussion about the need to move from the Syrian conflict to a political process,” Bogdanov continued, adding “in this regard, they talked about the necessity to reopen intra-Syrian dialogue with the assistance of external players — such as Russia and the US, as well as the main regional countries — Iran, Saudi Arabia, Turkey, Egypt.”

It was significant that Khatib supported highlighting two tasks, namely, the fight against IS and reconciliation of the conflicting parties (that is, the government and the opposition). It is important that the Russian Foreign Ministry does not consider the plan for a “Moscow I” meeting to be an alternative to the Geneva process, but a bridge in preparation for Geneva III. This is why the negotiations for Moscow I are expected to be conducted on the basis of the Geneva Protocol.

Russian analysts have concluded that those representatives of the Syrian opposition who have agreed to meet will come to Moscow and compare positions, and then a meeting between them and a delegation from Damascus will take place. It was thus predictable that in talks with Lavrov in Sochi Nov. 26, Syrian Foreign Minister Walid Moallem would announce Damascus’ agreement to the Russian plan.

It is noteworthy that Lavrov and Moallem were unanimous in the view that there is no military solution to the Syria conflict. Yet, Lavrov also stated, “There won’t be another Geneva II.” He elaborated further, stating, “If you think that a conference will be announced similar to the one that was held in ... January this year with the participation of 50-odd states, thousands of journalists, bright lights, there won’t be such a conference.”

Even as it promotes its plan for Moscow I, Russia continues to support de Mistura's proposal to freeze the conflict, which is also backed by Syria, according to Moallem’s declarations. Assad had earlier declared that the de Mistura plan was “worth exploring.”

De Mistura has outlined three main points: “One is the need to focus on the real threat of terrorism as defined by the resolutions of the Security Council. Second is to reduce violence ... Three, through the reduction of violence, try to reach as many people as possible in Syria and outside Syria who have been suffering due to this ongoing conflict; and through that, hopefully facilitate it and use that as a building block in the direction of a political solution.”

The city of Aleppo was designated as the first site where the freeze would be enforced, because it is, in de Mistura's words, “a symbol of culture, of multi-culture and of religious and historical heritage in Syria.” It seems, however, that of no less importance in the selection of Aleppo is that there are no radical jihadist groups there. In accordance with the plan of the UN special envoy, all units based in the city — the government's and the opposition's — not only would retain control over the territory they hold, but they would also get to keep their weapons.

This is one of the main differences between the de Mistura plan and the local cease-fires implemented in the past, such as, for instance, the one in Homs in February that some opposition forces interpreted as a surrender of their positions to the regime. Herein lie some of the contradictions between the freeze plan and the Harland cease-fire plan. It is certainly no accident that de Mistura has stressed that the “concept of a ‘freeze’ [is] different from previous cease-fires,” as it provides “a new way for approaching the de-escalation of violence.”

As for the Harland plan, David Ignatius commented Nov. 4 in The Washington Post on the leak of a document setting forth a proposal to enter into a series of local cease-fires. Here, too, it was assumed that they would later lead to a process of political reconciliation. Some experts believe that there was no leak and that the authors probably gave the document to the media to draw attention to it. The plot thickens, as after that Harland gave Traub, writing for Foreign Policy, a detailed account of the project. As the document itself remains undisclosed, Traub does not cite it, but explains the main points. According to him, the plan is supported by the Syrian authorities and could, in the long term, lead to “an end to the war, a comprehensive reform of the constitution, and internationally-supervised elections.”

Hegel argued that “history is cunning, [and] that human actions do not have the consequences that those who perform them intend.”​ It is to be hoped that the German philosopher’s sarcastic observation will not apply to the fate of the plans designed to save the troubled Syrian state.