Rebels are making gains in the south while government forces are closing on Aleppo city, and the outcomes of these battles may determine how final negotiations proceed. 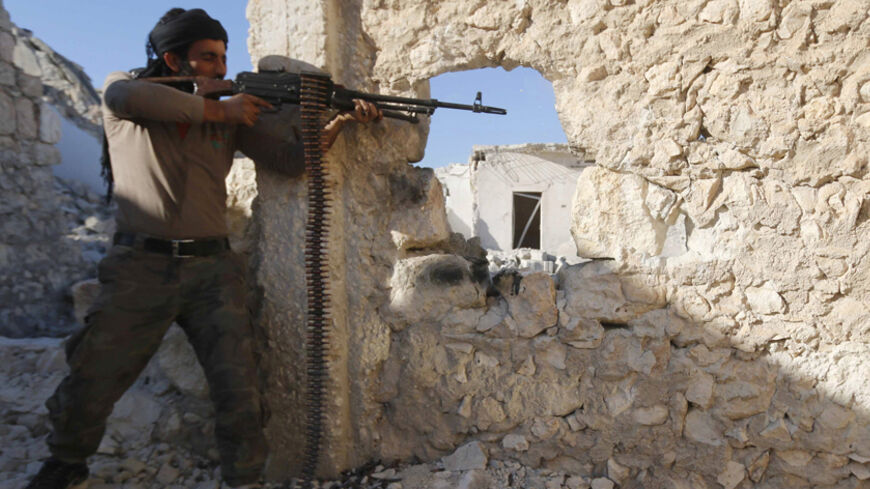 While events on the regional diplomatic scene are moving rapidly, there is renewed momentum to draw the outlines of a final endgame in Syria. This momentum is boosted by the imminent historic agreement on Iran's nuclear program, which if concluded will convince the world that Iran can negotiate in good faith, and the Iranians can become key partners in working out solutions to the region's other pressing issues, the war on the Islamic State (IS) and the Syrian conflict.

With that in mind, there are currently two pivotal battles taking place in Syria, the outcome of which will decide the balances of power and control over territory in the framework of mounting international efforts to enact a conflict freeze.

The stakes are high, and both sides know it. As previously stalemated fronts see intense and frenzied pushes — mainly by regime forces — the momentum seems to be on the regime’s side, with the imminent siege and fall of Aleppo city, and advances into the rebel stronghold of Ghouta in Damascus. But one area where the rebels seem to be gaining the upper hand is the south, namely in Daraa province and the border region with the Israeli-occupied Golan Heights. Recent advances have seen rebel factions, including the al-Qaeda affiliate Jabhat al-Nusra, capture key strategic towns like Nawa.

The question being asked is why rebels are so effective in the south, but not anywhere else. To answer this question, we must understand what each front means in the grand scheme of the Syrian conflict. The southern front has always been one of the gravest threats to the capital, Damascus, and is important to a regime seeking to firmly re-establish and secure its claim to the central Syrian state. Without Damascus, the regime is reduced to little more than just another warring camp within a messy civil war, which gives it no more leverage in the endgame negotiations than any of the others. To that end, threatening the southern front is an excellent way to pressure and scare the Bashar al-Assad regime, and this is exactly the message the powers allied against it — namely the United States and its European and regional allies — want to send. In the framework of the final countdown, every side seeks to reveal his trump cards, or at least hint at them.

Conversely, there is no real desire to see Damascus fall, which would plunge Syria into intractable chaos, further threatening regional stability. This is why the Ghouta front will either remain stalemated right to the end, or possibly see limited regime advances.

In the northern front, however, it is a completely different calculus brought about by the menacing presence of the ultra-extremist terrorist group IS, which has control over vast areas of north and northeastern Syria. The threat of this group is so severe that new game plans are constantly being devised and rapidly put into action, foremost of which of course are the US-led coalition’s airstrikes against IS, as well as Jabhat al-Nusra and Ahrar al-Sham.

The United States, which lacks any reliable ground allies inside Syria, might see the regime as the only force capable of holding IS back in the north. To that end, it has no problem in "allowing" it to seize the areas of Aleppo city and its countryside still outside its control. This would put it face-to-face with IS, which has its strongholds just to the east of Aleppo, in the towns of Manbij and al-Bab. For lack of any better alternatives, this seems to be what the Americans are now hoping — or working — for in the north.

The rebels and the regime both seem to have realized this, and are both fighting fiercely and desperately in Aleppo’s key front, Handarat. The fall of east Aleppo would most likely precipitate a spectacular collapse among rebel ranks and herald their end as an effective actor in the civil conflict.

Spearheading the regime offensive are units from foreign militias, mostly Shiites from Lebanon, Iran and Afghanistan. Closely backing them are elite units from the Syrian army, while at the back, cleaning up, consolidating gains and protecting the flanks are the local militias such as the Palestinian Al-Quds Brigades — whose members actually hail from the strategic Handarat refugee camp — as well as Baath Party militias and the National Defense Forces. The rebels, meanwhile, are a hodgepodge of jihadists, Islamists and local rebel groups that make up the Islamic Front umbrella group. The threat is so severe, that Jabhat al-Nusra and Harakat Hazm have put aside their grievous differences — Hazm was routed by Jabhat al-Nusra in Idlib — to enact a temporary cease-fire in Aleppo to be able to face the looming and dangerous regime advance.

So far, they have been successful in slowing it, but it is really only a question of when and not if east Aleppo falls. Absent a strong military intervention, including air support and large supplies of weapons and ammunition, the fate of the rebels in Aleppo is sealed.

Those very sentiments were echoed to me by a young junior rebel commander of the Liwa al-Tawhid Brigades that fought at the Handarat front. “It seems they have abandoned us and want to see Assad kill us and raze our homes, what else can you call this? We have been pleading for help and ringing the alarms for weeks, but we got nothing except words of encouragement and support.” He went on ominously, “And you still expect people not to be drawn to the jihadists? Can you blame them when no one is helping them but those groups? They see America and its allies as their enemy now, complicit in helping Assad against them.”

It seems anti-Western and anti-coalition sentiments are running high, but such is the intrigue of war and its fickle alliances. Pursuit of victory — or in Syria’s case an acceptable resolution — dictates how this dirty game is played, with no morals. Squarely on the receiving end of this destructive cynicism are the hapless Syrian people.