Pro-government Turkish analysts argue that NATO membership has become a shackle on Turkey, hampering the country’s ambitions to become a global actor. 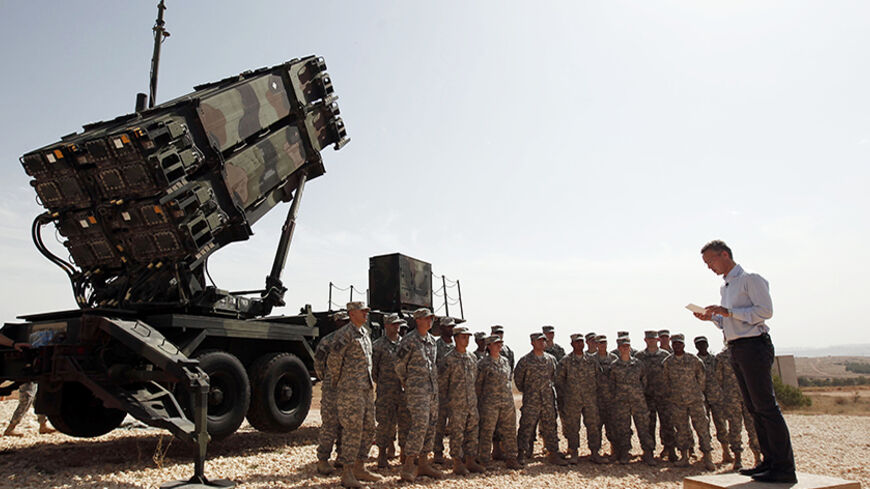 NATO Secretary-General Jens Stoltenberg of Norway addresses US soldiers during his visit to view the US Patriot missile system at a Turkish military base in Gaziantep, southeastern Turkey, Oct. 10, 2014. - REUTERS/Osman Orsal

Turkey’s foreign policy and role in the international system have become the subject of growing debate both in local and foreign media over the past two years. The country’s NATO membership is inevitably a central topic in the debate. Some argue NATO membership has “shackled” Turkey’s independence and maneuvering ability and should be gotten rid of, while others see the alliance as a vital “anchor” that has held Turkey in the Western bloc for 62 years. Those arguments are worth a closer look, for they reflect how the international community’s perception of Turkey has changed and could be helpful in analyzing the domestic foreign policy debates.

Clearly, making joint decisions with Western NATO allies and implementing those decisions has become a serious problem for Turkey in the past several years. In an Oct. 9 article headlined "Time to Kick Turkey out of NATO?" Jonathan Schanzer, vice president for research at the Washington-based Foundation for Defense of Democracies, argues the Syrian crisis has demonstrated that “Turkey under the AKP [Justice and Development Party] is a lost cause. It is simply not a partner for NATO. Nor is it a partner in the fight against the Islamic State [IS].”

Similarly, Turkish columnist Fatih Altayli — in an article headlined "Could Turkey Be Kicked out of NATO?" — argues that Turkey, drifting fast away from the West, has reached another critical turn with the Kobani crisis. Rather than a futile debate on whether the worsening Western perception of Turkey is justified or not, Turkey must think hard about why the perception has worsened, he says.

However, for intellectuals close to decision-makers in Ankara, the essential matter to contemplate is not why the Western perception of Turkey has changed or how it could be rectified, but rather how Turkey’s old foreign policy objectives should be revised in line with what they believe is Turkey’s rising international profile as an independent and powerful global actor.

In an article headlined “The 2023 doctrine and prospective contributions,” President Recep Tayyip Erdogan’s chief adviser Yigit Bulut lays out an ambitious reading of the international system. He foresees the emergence of three global power centers — the United States, China and Turkey — over the next decade, stressing that Russia’s policies should be closely followed in this context. In another column, headlined “Are they planning NATO intervention in Turkey?” Bulut claims that “dirty forces” in and outside Turkey, which used to provoke military coups in the past, have come to accept they cannot unseat the current government through elections and could be planning an intervention under NATO’s umbrella.

Sources close to the government also argue that NATO has acted irresponsibly in all recent crises in Turkey’s vicinity, abandoning Turkey to its fate (some believe this was done deliberately) and that NATO membership has forced Turkey to be part of policies and operations it actually opposed. Turkey’s political decision-makers believe NATO membership has hampered independent foreign policymaking, as illustrated in the 2011 Libya turmoil when Turkey had to reluctantly join NATO’s Operation Unified Protector, the crisis that followed Turkey’s selection of China as a prospective supplier of air defense systems. NATO’s fiats on Turkey in the Russia-Ukraine crisis and NATO’s failure to take any action after Syria shot down a Turkish fighter jet in June 2012 can be listed as the other examples

Turkish decision-makers believe that changing threat perceptions have resulted in NATO prioritizing the West’s security issues and ignoring those of Turkey, the alliance’s only Muslim member. Indeed, one can observe a widening gap between Turkey’s threat perceptions and favored solutions and those of the United States and the European Union, which form NATO’s core.

Academic Sedat Laciner, for instance, writes, “Turkey is left between a rock and a hard place in many aspects on the issue of IS and Syria and Iraq. Ankara does not approve of IS’ methods, yet it boggles at Baghdad’s and Damascus’ policies of discrimination and ethnic cleansing against Sunnis. … In Turkey’s view, both IS and the sectarian rift in the region are the product of Baghdad’s and Damascus’ unacceptable policies. Hence, Ankara expects NATO members to rein in those two governments and support moderate groups.”

Similarly, the Turkish public — unlike other NATO nations — has become increasingly estranged to NATO, especially after the Afghanistan war. Disaffection with NATO is stronger in Turkey than in any other member country. Hence, the traditional narrative that Turkey has been a loyal NATO ally for six decades and NATO is indispensable for Euro-Atlantic security is losing its appeal for the Turkish public. Not surprisingly, in early 2011, NATO’s then-public diplomacy officer Knut Kirste said the decline in Turkish public support was worrisome and called for a new communication strategy to promote NATO in Turkey.

Turkish academic Ebru Canan Sokullu questions how the Turkish perception of the alliance soured, pointing out that 92% of the Turks backed NATO’s Kosovo war in 1999. According to one explanation, the AKP, seeking to consolidate Turkey’s rightist conservative majority under its banner, has adopted a conservative nationalist rhetoric of statist and reactional nature, with its impact growing in the past two years.

The 2014 Transatlantic Trends survey of the Washington-based German Marshall Fund of the United States, released Sept. 10, found that 44% and 46% of the Turks favor an independent approach in relations with China and the Middle East, respectively. The figures indicate that the AKP decision-makers’ “independent foreign policy” narrative is largely supported by the Turkish people. This is a worrisome trend, for it shows that Turks are becoming opposed to the pursuit of international alliances and cooperation with the West.

In comments on NATO’s decreasing popularity, retired Ambassador Murat Bilhan argues that Turks largely identify NATO with the United States and thus their view of NATO is being swayed by the zigzagging in Turkish-US relations.

For half a century, NATO has been seen as key security peg anchoring Turkey to the West. Boosted by the support it offered in the Korean War, Turkey won NATO membership in 1952, in the first enlargement wave that followed NATO’s creation in 1949 as a 12-member security alliance. During the Cold War, Turkey became a key NATO flank against Soviet Russia.

NATO membership not only made Turkey part of the Western bloc but had a profound impact on its domestic politics. Some argue NATO membership served to boost the Turkish military’s self-confidence and led it to redefine its relationship with the West, which, in turn, emboldened the generals to come out of the barracks and become an influential player in politics.

The Turkish army’s senior officers continue to receive training at elite military colleges in NATO countries and serve two- or three-year stints at permanent missions in various NATO commands. Nearly 300 Turkish military personnel currently serve in such posts. The Turkish military is one of the four NATO armies that continue to provide military support in Afghanistan. The Istanbul-based Third Army Corps, which Turkey has allotted to NATO and which has both national and NATO headquarters with about 8,000 personnel subordinate directly to the Turkish General Staff, continues to serve as a NATO high-readiness force. The Allied Land Command is based in the western Turkish city of Izmir, while the Turkish military runs two major NATO training centers — one on counterterrorism in Ankara and another on maritime security in Izmir. The Turkish army participates in at least 10 NATO exercises each year and takes active part in NATO operations.

In short, 62 years with NATO have had a profound impact on the Turkish military’s institutional culture, decision-making processes and combat efficiency.

A retired three-star general in Ankara, however, argues that NATO’s significance goes well beyond that, representing a major warranty that Turkey stays on the path of democracy.

“Turkish villagers would tell you the story of the quarrelsome man who gets along with no one in the village. Then, one night someone would throw stones at his house and break windows, another night they would torch his barn. That is, the villagers will find a way to harm him. So, a villager needs to get along, maintain dialogue and build lasting friendships with certain families in the village, if not all of them. And that’s what NATO offers to Turkey in our global village today. We have to stop quarrelling with everybody in the village,” the retired general said on the condition of anonymity.

“Through NATO membership, institutionalized for 62 years now, the Turkish nation has chosen also peace, stability and freedom. To me, forfeiting NATO and quitting the Western axis for the sake of adventures such as leadership of the Turkic or Islamic world is equivalent to forfeiting democracy as well,” he said.