Rebels in northern Aleppo say the US-led airstrikes have made no difference on their front lines against the Islamic State, and they have yet to see an increase in arms supplies. 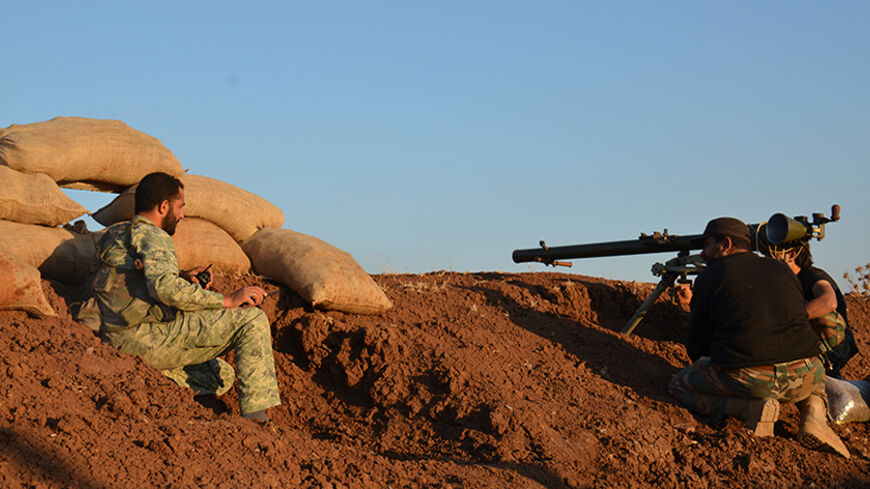 Syrian rebel fighters on the front lines with the Islamic State in the northern Aleppo countryside, Sept. 30, 2014 - Mohammed al-Khatieb

ALEPPO, Syria — At 3:30 a.m. Sept. 23, Syrians heard the first strikes of the international alliance against the locations of the Islamic State (IS) and others the United States considers terror groups.

In the northern Aleppo countryside, where confrontations continue between IS and the rebels along a front line that stretches over 45 km (28 miles), the military map has not changed. Both parties are maintaining the positions that have been under their control since Aug. 13 after IS took over 13 villages and approached the strategic town of Marea, the largest opposition stronghold in the area.

The coalition’s airstrikes have mainly targeted IS in Raqqa, Deir ez-Zor, Hasakah and al-Bukamal. These cities are in the center of IS territory, away from the borders and front lines, where the probability of quick retaliation is lowered. The airstrikes mainly hit oil refineries under IS' grip in the nation's east. This will reduce the money sources and financial capacities of the organization in the long run, but for the time being, little difference has been made on the battlegrounds for the rebels.

The rebel factions are trying to attack IS strongholds in the northern Aleppo countryside, but little progress has been made by either side. IS has also recently reinforced its positions in anticipation of possible attacks from the opposition by planting mines around its front line and fortifying them with trenches and earth mounds.

In Kobani, violence has broken out again between IS and some revolutionary brigades and the People’s Protection Units, after relative calm on the front line on the first day of the US-led strikes. However, IS rockets are reaching Kobani, indicating that the terrorist group is nearing the city. The alliance struck three IS locations in Kobani's outskirts on Sept. 28.

Yahya Hafez, a field officer in Jaish al-Mujahideen, one of the prominent rebel factions, told Al-Monitor: “The alliance’s strikes have not yet affected our fronts in the northern Aleppo countryside because these strikes were neither focused nor painful. The air raids alone won’t be effective. It will be enough if the international community just supports the rebels and offers them sufficient aid and weapons to annihilate IS mobs in Syria.” 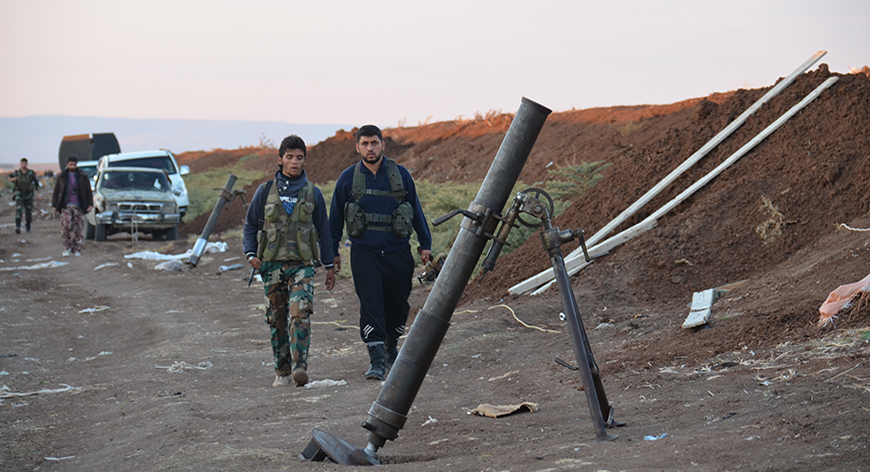 Syrian rebel fighters walk past a mortar in the countryside north of Aleppo. (photo by Mohammed al-Khatieb)

Hafez expressed his dissatisfaction with the alliance’s strikes since they are not targeting the regime or Hezbollah, which is also listed as a terrorist organization. “We demand a no-fly zone and real military support,” he said.

It seems that the no-fly zone that Turkey is trying to impose in the northern Syrian regions as a condition for its entering the international alliance is being effectively implemented. Since the start of the alliance’s strikes on Sept. 23 until Sept. 29, the regime’s military aircrafts have not been seen above the northern Aleppo countryside, where daily raids used to strike the towns under opposition control, such as Marea, Tal Rifaat and Anadan.

In Aleppo, which is divided between the regime and the rebels, the overflights have clearly been reduced, now limited to some helicopter flights. The regime has made up for it with rockets and heavy artillery. In the past few days, four surface-to-surface missiles targeted the neighborhoods under the rebels’ control, including Ashrafiyeh, Bani Zaid and al-Meleh Square in the Old City.

Several rebel factions have issued statements of dissatisfaction with the alliance’s strikes for not targeting the regime of President Bashar al-Assad.

The Hazem movement said in a statement obtained by Al-Monitor, “The airstrikes are considered a violation of national sovereignty and an attack against the Syrian revolution. We will only work according to the revolution’s priorities, not according to the will of the international alliance.”

Hazem, which falls within the category of the moderate opposition and was among the first groups that received US TOW missiles, said, “The only side benefiting from the foreign intervention in Syria is Assad’s regime, especially in the absence of a real strategy to topple it.”

The movement condemned the deaths of civilians following the alliance’s raids on Idlib and Homs. One of the inhabitants who had returned from Kfar Daryan in the Aleppo countryside told Al-Monitor on the condition of anonymity that 12 civilians had been killed by the alliance’s raids, most of them children from the Barakat family, saying, “Four shells targeted Jabhat al-Nusra’s locations, but the fifth one fell on the town and killed the inhabitants of two houses that were completely destroyed.”

The rebels also say they have yet to see an increase in arms supplies since the US-led coalition began its airstrikes. Mohamed Youssef, a military commander in the Thuwar al-Shamal brigade, a Free Syrian Army faction fighting IS in the northern Aleppo countryside, told Al-Monitor, "We have not received high-quality weapons, nor heavy artillery yet. We are fighting with a few light weapons and locally made mortars."

He added, "Our fighters do not need training, rather weapons that would equalize the power balance in the battle against IS and the regime."

There are no tangible results on the ground yet for the US-led alliance strikes on IS locations in Syria. Six days in, the organization still stands its ground in the areas it acquired before the strikes began. Moreover, the opposition’s position, which is tending more to defense rather than attack, has not changed with the arrival of military help or weapons. The rebels are also reluctant to drain their energy and resources fighting IS for fear that the regime might take advantage of their efforts.