Turkey rows against the tide

Ideological assumptions based on Islamist and Sunni sympathies, as well as a series of bad judgments, leave Turkey with diminished influence in a region where it once hoped to play a leadership role. 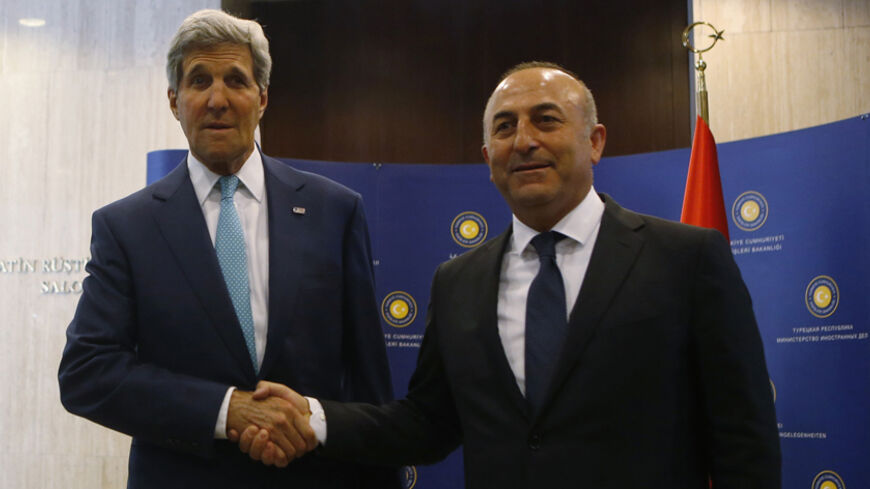 Turkey is clearly a reluctant member of the coalition being spearheaded by the United States, with support from Saudi Arabia, against the Islamic State (IS) in Iraq and Syria. The reasons for this have been amply covered by Al-Monitor and may be understandable from Ankara’s perspective. Not everyone is that understanding, however.

Turkey’s responses to crises in the Middle East are forcing many to question what Ankara is ultimately trying to achieve in a volatile part of the world where it hoped until recently to be a game changer, but where its plans have foundered.

What is seen instead is a Turkey pursuing objectives out of touch with developments on the ground, and which have resulted in isolation because of miscalculations based on the barely veiled Islamist and pro-Sunni outlook of the ruling Justice and Development Party (AKP).

Put another way, the dream President Recep Tayyip Erdogan and Prime Minister Ahmet Davutoglu harbored of making Turkey the leading Islamic country that would guide the region to a better future has turned sour.

Diplomats and analysts sounded by Al-Monitor say that Ankara’s inability to be effective in the face of momentous developments in the Middle East, while trying to pursue its own agenda, has pushed its regional influence to an all-time low.

Even the refusal by Turkish Foreign Minister Mevlut Cavusoglu to sign the communique on combating IS, which was agreed on at the foreign ministers meeting in Jeddah on Sept. 11, is seen as another case in point.

The US State Department made no mention of Turkey in its news release, where it listed the foreign ministers of the Gulf Cooperation Council, Egypt, Iraq, Jordan, Lebanon and the United States as having signed on to the “Jeddah Communique.”

The communique said these countries were “resolved to strengthen their support for the new Iraqi Government in its efforts to unite all Iraqis in combating [IS] and discussed a strategy to destroy [IS] wherever it is, including in both Iraq and Syria.”

Many will read Turkey’s refusal to sign on to this as an indication that it does not share this “resolve.”

Even Qatar, which had seen eye to eye with Turkey on Syria, Iraq and Egypt, also signed the communique, thus compounding Ankara’s isolation. US Secretary of State John Kerry was due in Ankara as this article was being written, to follow up on the visit by US Secretary of Defense Chuck Hagel on Sept. 8, to try and sway Turkey into a firmer commitment against IS.

Supporters of the AKP government, however, argue that Ankara is justifiably concerned about the fate of the 49 hostages, including its Mosul consul general, who have been held hostage by IS since June. They say open animosity toward IS would put the hostages in harm's way.

But public anger is mounting over the government’s apparent inability to rescue its citizens despite claims from AKP circles about Turkey’s regional might and influence. The opposition, on the other hand, is convinced that the hostages are being used as an excuse not to act against IS.

The opposition also continues to allege that the AKP government supported IS in the past, and continues to do so today in underhand ways. The government denies such accusations strongly, which also come from outside the country, and points to recent operations against members of the group in Turkey in its defense.

But these allegations refuse to go away with some analysts even claiming that Ankara is unwilling to act against IS, because it still hopes to benefit from it.

“Turkey fears that decreasing [IS'] strength in Syria, where Turkey had originally built a relationship with the group on the basis of their capability in fighting the Syrian regime, would allow Syrian President Bashar al-Assad to regain power, territory or even credibility by collaborating with the United States and its allies against [IS],” said Blaise Misztal from the Bipartisan Policy Center (founded by former US Senate Majority Leaders Howard Baker, Tom Daschle, Bob Dole and George Mitchell).

“Erdogan’s outspoken support for Hamas during the recent Gaza conflict — alone among Middle Eastern leaders, except for Qatar — and anti-Semitic slurs should also call into question whether the Turkish government’s commitment is to promoting stability in the region or pushing an ideological agenda,” Misztal said.

It is not just in Washington, however, where Erdogan’s motives are being questioned. He remains a staunch supporter of the Muslim Brotherhood, and its affiliate Hamas, much to the annoyance of existing regimes in the Middle East also.

Erdogan is at odds with Egypt, where the Muslim Brotherhood has been banned, and with Saudi Arabia and other Arab governments that supported the ouster of Egypt’s Islamist President Mohammed Morsi, and the banning of the Brotherhood.

Meanwhile, recent remarks by Cavusoglu suggesting a blatantly anti-Shiite attitude are unlikely to have gone down well in Baghdad, not to mention in Tehran or by the Shiites of Syria and Lebanon. Referring to the recent NATO summit in Wales, Cavusoglu told the Anadolu Agency in an interview that providing arms to the Iraqi army against IS was one of the items discussed in Wales.

“We underlined our concerns. For one thing, over 95% of the Iraqi army is currently made up of one sect. Therefore, it may be hard to control where the arms supplied will go,” Cavusoglu said, without explaining who they fear these arms may go to.

He said that Turkey was also concerned that the Kurdistan Workers Party (PKK), which the Turkish military has been fighting for nearly three decades, could also end up with the arms supplied to fight IS. This concern, however, has been expressed by Ankara before and relates to weapons that are being given to the Kurdish peshmerga, who are being joined by the PKK in parts of northern Iraq to fight IS.

Ankara has no way, of course, of preventing the arms going to the Iraqi army, the peshmerga or any group in Syria that it does not favor, such as the People's Protection Units (PYG), the armed wing of the Kurdish Supreme Committee of Syrian Kurdistan, which has links to the PKK.

Turkey has landed in a situation that shows how things are developing outside its control. Turkish papers are reporting on an agreement between the PYG and the Free Syrian Army (FSA) for an alliance against IS.

Its aim is said to include the liberation of land near Aleppo, where there is a small plot housing the Tomb of Suleiman Shah — the grandfather of Osman I, founder of the Ottoman Empire — which is the only official Turkish territory outside Turkey. The tomb is being protected by a small contingent of Turkish soldiers inside, but the area around it is under IS control.

The media is announcing that the PKK will be liberating and protecting the tomb, a development that has been referred to as “a crowing absurdity for Turkey,” and that is bound to grate on nationalist nerves.

Another topic that has gone seriously wrong for the AKP governments is the question of Syrian refugees. Ankara’s insistence on keeping an open door to predominantly Sunni refugees from Syria has resulted in serious social unrest in Turkey.

It has also resulted in an upsurge in anti-Arab sentiments across the country and has contributed to the perception that Turkey lacks coherent policies relating to developments in the Middle East.