Turkish-Egyptian ties are at a standstill 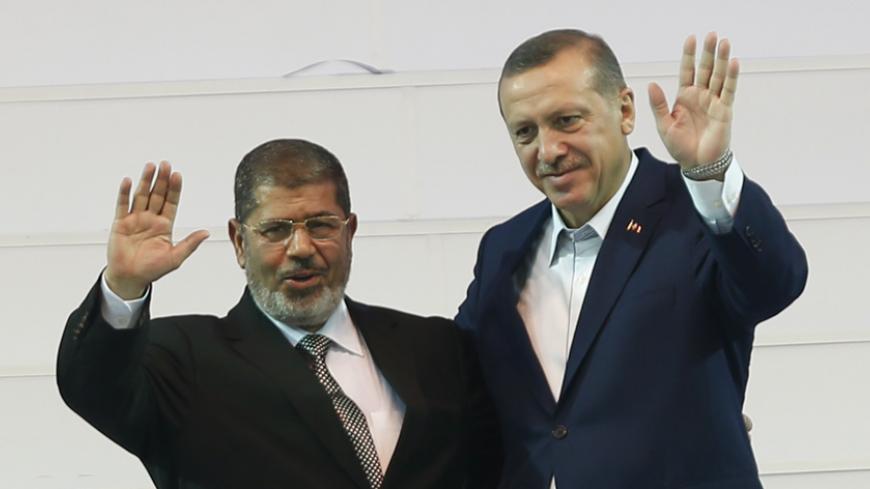 Prospects for a rapprochement between Ankara and Cairo, whose ties hit rock-bottom following Mohammed Morsi's ouster by the Egyptian military in 2013, appear bleaker than ever after Turkish President Recep Tayyip Erdogan used some of the harshest language to date against Egypt in his UN General Assembly address on Sept. 24.

According to Middle East experts in Ankara contacted by Al-Monitor, Erdogan’s remarks, which elicited a sharp rejoinder from Egypt, show that Turkey will remain a staunch backer of Morsi and a keen supporter of the Muslim Brotherhood in Egypt and across the Middle East.

This, however, flies in the face of many regional countries that are opponents of the Brotherhood, and raises questions about whether Ankara can play any significant role in the Middle East while remaining at loggerheads with a principal Arab power that the West and many Arab countries are cooperating closely with.

Referring to the “slaughter of democracy” in Egypt in his speech to the UN General Assembly, Erdogan accused the United Nations and the democratic countries of the West of “simply looking on” as the popularly elected president of Egypt was toppled in a military coup, and as thousands who wanted this to be accounted for were massacred.

Egypt’s response to Erdogan was quick in coming and also showed that tensions between the two countries were unlikely to abate anytime soon. "There is no doubt that the fabrication of such lies and fabrications is not something strange that comes from the Turkish president, who is keen to provoke chaos to sow divisions in the Middle East region through support for groups and terrorist organizations," a statement from the Egyptian Foreign Ministry said.

Providing insight into how Erdogan’s remarks were received in the region, the United Arab Emirates Foreign Ministry also denounced Erdogan, accusing him of “irresponsible and blatant interference in the internal affairs” of Egypt.

Erdogan has consistently criticized the Egyptian military and its backers in most of his public speeches since its coup against Morsi and the Muslim Brotherhood. Meanwhile, Erdogan’s grassroots Islamist supporters continue to admire Morsi and bear an ideological affinity with the Brotherhood, which has been labeled a “terrorist organization” in Egypt.

Having pursued policies that clipped the political wings of the Turkish military, to guard his Islamist government against the possibility of being ousted in a coup similar to those that took place in Turkey in past decades, Erdogan clearly feels politically duty-bound to oppose any military-led ouster of elected governments, and particularly Islamist ones, in the region.

“Opposing military coups has become a centerpiece of Ankara’s foreign policy following the Egyptian coup in 2013. There are no signs that this value-based doctrine, which has replaced Turkey’s previous doctrine of maintaining good ties with regional countries, will change soon,” Tanriverdi said. She added that this also indicates there will be no early change in the current state of Turkish-Egyptian relations.

Umit Ozdag, the director of the 21st Century Turkey Institute, another Ankara-based think tank, struck a more alarming note when explaining the motivation behind Erdogan’s attack on Egypt at the UN.

“There is an ideological motivation behind his words that shows Turkey will become the center for the Egyptian opposition, and especially the Muslim Brotherhood, in the coming period,” Ozdag, a political science professor and former deputy from the Nationalist Movement Party (MHP), told Al-Monitor.

He said this was not just any public speech by Erdogan but one that was carefully prepared with the assistance of his foreign policy advisers with a view to sending a clear message to members of the Muslim Brotherhood and Salafists in the Middle East.

Asked if this would not damage Turkey’s chances of playing an influential role in the region by putting it at odds with the region’s principal powers, Ozdag said the answer to this depends on one’s point of view.

“Looked at rationally, it's obvious that Turkey is isolated in the region. But the architects of Turkey’s current policies refer to this as ‘precious isolation’ and believe supporting Salafists and the Brotherhood is the correct thing to do,” he said. Ozdag went on to assert that Ankara’s support for these groups would do “extraordinary damage to Turkey the way Salafists in Afghanistan did to Pakistan.”

Retired Ambassador Osman Koruturk, who served as special envoy for Iraq in 2003-05, and whose previous postings as ambassador included Tehran, also believes that Erdogan’s fury against Egypt is ideologically motivated, rather than reflecting a genuine concern for democracy. He pointed out that Erdogan’s own democratic credentials in Turkey were far from perfect.

Koruturk, a deputy from the main opposition Republican People's Party (CHP), maintained that Erdogan dreamed of a political system in the Middle East that was based on the Muslim Brotherhood’s Islamist outlook. “The anger in his UN speech is essentially against those countries that are supporting [President Abdel Fattah al-Sisi's] government in Egypt and preventing the Muslim Brotherhood from ascending to power,” Koruturk said.

Retired diplomat Ali Tuygan, whose ambassadorial posts included Riyad (1995-97) and who served as undersecretary for the Foreign Ministry in 2004-06, for his part, questioned how Turkey expected to be elected to the UN Security Council — which it is lobbying for — with Erdogan venting his anger at Egypt in this way.

Tuygan also told Al-Monitor that it was not possible for Turkey to play an important role in the Middle East without Egypt’s support. “Even [Palestinian President] Mahmoud Abbas made this point during his visit to Ankara in July, when he openly emphasized Egypt’s regional importance during a panel discussion,” Tuygan said.

Despite his critics, Erdogan’s continuing anger at the Egyptian government and his support for the Muslim Brotherhood, and its affiliates like Hamas, continue to command great respect and admiration among Turkey’s conservative Islamic masses.

Arguing that Turkey’s foreign policy was “neither dictating nor condescending,” Seral Koprulu, an analyst for the pro-government daily Yeni Safak, wrote in a current column that hatred and violence was increasing by the day in the Middle East.

“The solution is for all Muslims to act with a sense of solidarity and to unite,” she said in her commentary in which she lauded Prime Minister Ahmet Davutoglu’s, and hence Erdogan’s, foreign policy that she indicated was aimed at trying to secure this.

This, then, is how Erdogan’s supporters see the Middle East. Erdogan’s morality-based approach to the region is also one of the reasons behind the strong support he secured in the Aug. 10 presidential elections, when he was elected with 52% of the vote.

The ruling Justice and Development Party (AKP) that he headed until he became president was preparing for the June 2015 general elections, only nine months away. It is aiming for a strong victory in those elections, based on policies that have brought it one electoral victory after another since first coming to power in 2002.

This also makes it unlikely in the coming period that Erdogan will change tack on Egypt, or any of his diplomat hobbyhorses relating to the region, and ensures that Turkish-Egyptian ties will remain in the doldrums for the foreseeable future.