US, Iran woo rival Kurdish factions in battle against IS

While US airstrikes against the Islamic State have mostly benefited areas controlled by Kurdistan Democratic Party forces, Iran has reportedly provided materiel and advisers to the Patriotic Union of Kurdistan. 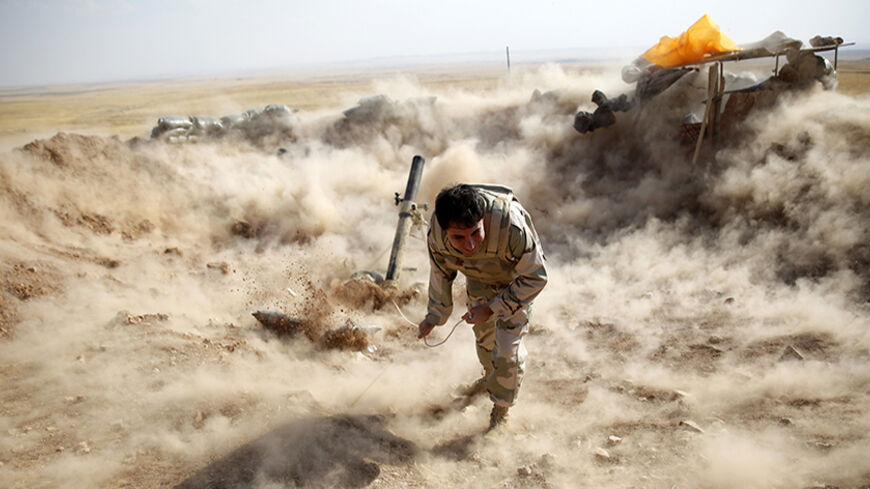 KHANAQUIN, Iraq — The fight against the Islamic State (IS) in northern Diyala province is being conducted against a sand-hued backdrop with a few date trees, slow-moving rivers and rocky outcrops.

Farther north and to the west of the Kurdistan Regional Government (KRG) capital, Erbil, the terrain is flat and featureless, where a few fields and clutches of trees break up the vast, mostly arid expanse around Makhmour.

Though the peshmerga forces manning the two fronts both answer to the KRG, they remain closely tied to the rival parties from which they sprung: the Kurdistan Democratic Party (KDP) in the north and west, and the Patriotic Union of Kurdistan (PUK) in the south and east.

There are signs that the two also receive support from different backers, influenced by longstanding ties and geographical proximity.

US airstrikes have focused on areas farther to the north and west, as have the latest French airstrikes on the northern town of Zumar, and are thus aiding mainly KDP operations.

On the front near IS-held Jalawla, essentially surrounded by the PUK-linked forces that Al-Monitor spent a few days with in mid-September, other regional players are said to be aiding the fight more.

After about an hour of sustained exchange of fire, relief was clear on fighters’ faces when support could be heard overhead from the Iraqi air force, targeting IS positions in the city. The Iraqi government is providing minimal air support in the area to PUK forces.

Al-Monitor was told by one of those on the PUK-linked Khanaquin peshmerga base, who spoke on condition of anonymity, that Iranian forces were in the area in small numbers. He said, however, “It’s only normal. When we had to escape from Iraq and the Baath regime, they gave us refuge. Even if we didn’t want them here it would be difficult to say no. But we need them.”

However, the officer said, “We aren’t allowed to speak to them, and certainly not show them to you.”

Gen. Hussein Mansour, commander of 2nd Support Forces, in charge of heavy weapons in Khanaquin, Jalawla, Naqshbandi and the surrounding area, dodged the question of Iranian support but did say that in late August, at a joint news conference with the Iranian foreign minister, KRG President Massoud Barzani had said that “Iran was the first country to provide us with weapons and ammunition” in the battle against IS.

Mansour told Al-Monitor, “It makes sense. IS is a threat to the United States and the West, but even more so to Iran. It’s closer. It’s only natural that they would want to prevent it from getting any more powerful than it already is.”

One of the officers at the base said the PUK forces in the area collaborate with the Shiite-dominated Iraqi government in Baghdad, as well.

He told Al-Monitor that Hadi Amiri, the minister of transportation in Baghdad as well as head of the Badr Organization, had brought his groups “through Khanaquin. We escorted him to Amerli. We helped them. We helped them to clear Amerli. “

Amerli, a Shiite Turkmen town near the Diyala governorate that had been under an IS siege for two months until late August, was retaken by US-backed Iraqi forces and Shiite militias with assistance from Kurdish peshmerga.

The officer said with some resentment that when Amiri went back to Baghdad, “He spoke against us. He said that ‘peshmerga are nothing, peshmerga are (just) a militia.’ Instead of appreciating our work, he spoke very badly against us.”

Amiri’s Badr Organization was set up as the Badr Brigades in 1982 with funding and weaponry provided by Iran. Known as the military wing of the Supreme Council for Islamic Revolution in Iraq, the group has been accused of maintaining militias acting as death squads since the 2003 overthrow of Saddam Hussein.

A large part of Iraq’s Shiite Kurds are from the area around Khanaquin, some 8 kilometers (5 miles) from the Iranian border. The town is in northern Diyala province, sections of which are under KRG de facto power, as is the case with parts of the Ninevah and Kirkuk provinces.

The Iraqi Constitution recognizes KRG authority over the provinces of Erbil (Hawler), Dahuk, Sulaimaniyah and, starting this year, Halabja.

A no-fly zone following the 1991 first Gulf War created the conditions for self-rule and a return of Kurdish refugees, many of whom had fled into Iran over the previous two decades.

Today, portraits of Mam (“Uncle”) Jalal Talabani are ubiquitous in Sulaimaniyah, as the PUK founder and former president of Iraq (2005-14) enjoys hero status in the area, while the mustached visage of Barzani, the KRG president and KDP leader since 1979 — under his trademark red and white-checkered turban — is seen in every office and many homes.

Much progress has been made in drawing the two peshmerga forces closer together in the “past two or three years,” Sirwan Barzani, a KDP commander and nephew of the KRG president, told Al-Monitor at the Black Tiger Camp between Makhmour and Gwer, west of Erbil.

The president’s nephew — a major shareholder in the highly successful Korek telecommunications company and involved in real estate, tourism and other sectors — told Al-Monitor that he was called on to go to the front when the battle against IS in Iraqi Kurdistan began early this summer.

Barzani told Al-Monitor that the major problem for the peshmerga no longer is the divide between the parties, but rather a lack of training, funds and weaponry. He noted that it had long been extremely difficult to get money for weaponry, since all funds must come from the KRG’s budget, which has been choked off by the Iraqi government since January.

“To get the weapons in our budget, nobody will sell them to us,” he said. “They want end-user certificates, and they will not accept ones from the KRG. They want them to be from Baghdad, and Baghdad refuses to give them to us.”