Residents in the Gaza border town of Khuza’a recall traumatic arrests and killings by the Israeli army as they begin to rebuild their lives and homes. 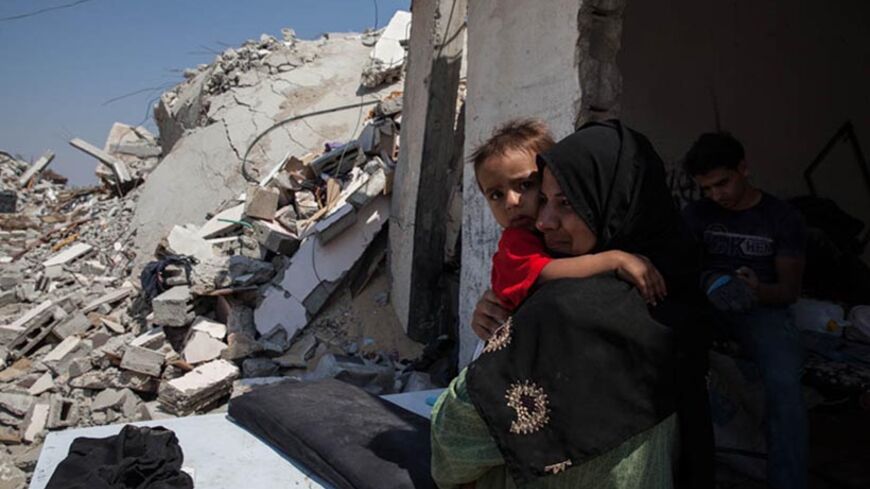 KHAN YUNIS, Gaza Strip — The war in Gaza is over, but the approximately 10,000 residents of Khuza’a do not yet believe it. The sound of reconnaissance aircraft flying nearby continues to make them think of death.

Mohammed al-Najjar, 23, standing near the rubble that used to be his home, said, “The war will be resumed, we know it. Can’t you hear the sound of drones? It is not enough for them that they left us with destroyed homes and painful memories. They want to maintain the threat.”

Mohammed is not the only one who feels insecure. These days, insecurity is a shared feeling for all the residents of this town who preferred to return to their destroyed homes rather than stay in refugee school shelters. They tell the same stories heard elsewhere in Gaza. The mass destruction of houses by the Israeli air force has left a heavy burden on Khuza’a. Al-Monitor tried twice to enter the town during the war, but Israeli forces had declared it a military zone and prohibited anyone from approaching it. The entrance to the town does not indicate much about the current situation in the town. Al-Monitor visited the Najjar family's neighborhood.

Standing next to some water storage tanks being repaired, Riad al-Najjar, 42, told Al-Monitor, “They used explosives to demolish houses. We found dynamite among the hay.” Everyone here knows the details of what happened, the names of the martyrs, their stories and their backgrounds. This is a new sacred memory for the town."

Mahmoud al-Najjar, 22, told Al-Monitor, “The first time we were able to enter Khuza’a after leaving it following the ground invasion, we found at the entrance, a 9-year-old girl in a wheelchair shot dead. Her body was decomposed. Not far away from her, we found the decomposed body of an old man. They were from the Abou Rjeily family, and it seemed that they were trying to escape. In the demolished houses, we found the bodies of some of the resistance fighters. As we tried to pull them out [from under the rubble], their feet or hands would come off.”

Located in the southern Gaza Strip, east of Khan Yunis on the border with Israel, Khuza’a was one of the main confrontation lines during the war. Bakr al-Najjar, 26, said, “The army told us to get out, and as we walked amid the bombs and rockets falling on us like rain, they opened fire on us. My uncle and my cousin died in front of me. We were unable to turn back. We had to leave the bodies behind. We just had to keep walking.”

Human Rights Watch reported on Aug. 4 that it had “investigated several incidents between July 23-25 when, local residents said, Israeli forces opened fire on civilians trying to flee Khuza’a, but no Palestinian fighters were present at the time, and no firefights were taking place.”

Fodda al-Najjar, 63, cooks okra on a small stove in a tent that her ​​sons made out of blankets and sticks near her demolished home. She lost her son as well. “He was a resistance fighter, and I believe he is now in heaven. He became a martyr on July 24, 2014. I miss him, but it was his choice, and he has my blessing,” she said.

Alaa al-Najjar, 20, took us to Mohammed Mahmoud al-Najjar's house, not far from Fodda’s former home. At dawn on July 25, more than 80 residents from the town had taken shelter in his basement when it was hit by Israeli forces.

Alaa, who was among the refugees in the house, recalled, “First, the house was hit by artillery, following which a rocket was fired by a reconnaissance plane. Then a bomb was dropped by an F-16 plane.” He saidd, “This occurred amid the screams of women and children. Many of them were wounded. Two old men were killed, Kamel al-Najjar and Salem Kodeih.”

Susan al-Najjar, 37, told Al-Monitor, “My husband was wounded by the shelling. Our 6-year-old son Mutassim was terrified, so we carried him and left, but a bullet shot by Israeli soldiers smashed into his head, right in front of our eyes. I knew that if we did not move, the rest of my four children would also die.”

Susan walks along and points to the place where she and her husband left Mutassim's body — on a pile of tiles topped with sand, under the shadow of a lush tree — to continue fleeing with her husband and the rest of her children Aya, Nazmi, Raghad and Zaid.

“I knew that if I did not leave my son and run, we would have all died, because bullets targeted those coming out of the basement,” Susan said with tears in her eyes. “I left my son for nine days. I always wondered if he was afraid of the dark, was eaten by dogs or felt cold. I was only relieved when we came back and buried him. They did not let me see his decomposed body.”

Ahmed al-Najjar, 39, took Al-Monitor on a tour inside his modest home and spoke about what happened there. He said, “Special Israeli forces stormed into my home after bombing the back wall. They arrested me and 30 other men from the town. They put us all in tanks, covered our eyes and ordered us to take off our clothes. They took us to an area where we stayed for six hours and then took us inside Israel. I remained there for four days, during which I was subject to interrogations. We all returned through the Erez crossing, but four members of my family are still detained.”

Shehada al-Najjar, 44, shared the same experience as his cousin Ahmed, except when Shehada was ordered to climb into the tank, a soldier shot him from afar. One bullet penetrated his neck, and another hit him in the arm.

Shehada told Al-Monitor, “When the soldier fired, the officer who was detaining us shouted at him. I kept bleeding for six hours during my arrest. Then they called the Red Cross to transport me to the European [Gaza] hospital where doctors were surprised that I was still alive.”

Eyewitnesses to the horror of the war and terrifying days in Khuza'a survived by chance. Their wounds remain unhealed.