Survivors of an Islamic State siege on an Iraqi army regiment in Anbar say the terrorist group used chlorine gas against them. 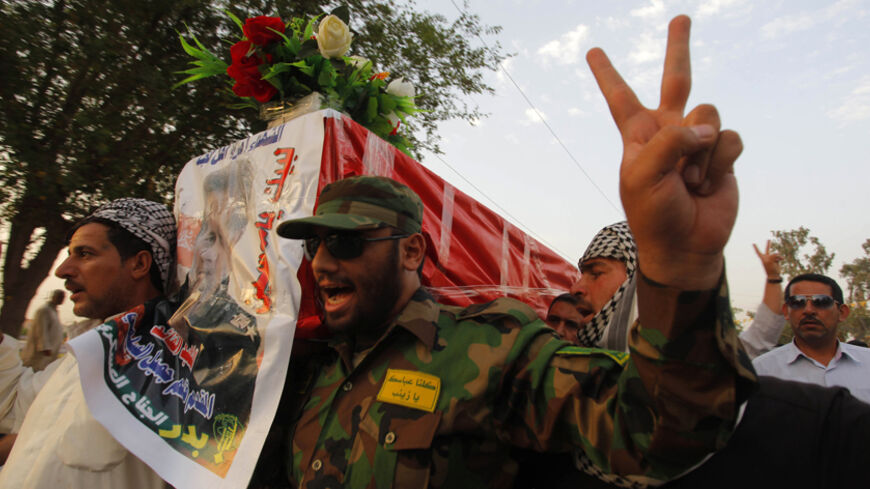 Mourners carry the coffin of an Iraqi officer killed in clashes with the Islamic State in Ramadi, during his funeral in Najaf, June 8, 2014. - REUTERS/Alaa Al-Marjani

BAGHDAD — The Islamic State (IS) has been accused of using chlorine gas against Iraqi soldiers who were besieged in Anbar province. Survivors of an Iraqi army regiment in Saqlawiya, near Fallujah, say the radical group used the gas against the besieged soldiers. There were conflicting government statements about whether the gas had been used.

The siege on the regiment, which consists of nearly 400 soldiers, has created an uproar in Iraq, with Iraqi members of parliament (MPs) on Sept. 21 demanding the government break the siege.

The following day, the Anbar Operations Command said it opened the road to Saqlawiya, ending the siege of the soldiers. These statements seemed to be an attempt to ease the anger of MPs and the public at security leaders for leaving the soldiers besieged without any support.

The incident came shortly after the massacre in the Speicher military base in Tikrit, where nearly 1,700 Iraqi air force cadets were killed. The investigations are still ongoing, as the victims’ families continue protests, blaming security leaders for failing to protect the lives of the cadets.

The testimonies of the survivors from the Saqlawiya incident, which were posted on YouTube, have shown the extent of negligence on the part of security leaders toward the soldiers, as well as the lack of serious attempts to save their lives as the siege lasted five days. The biggest surprise in the testimonies was that IS has chlorine gas and used it against the besieged soldiers.

The MP in Qadisiyah province south of Baghdad held a news conference in the Iraqi parliament, during which they blamed Prime Minister Haider al-Abadi in his capacity as commander in chief of the armed forces. The soldiers who hail from the province have suffered from the neglect of military leaders, in spite of repeated appeals seeking protection for the service members.

Sabah al-Jouburi, a professor at Salahuddin University in Salahuddin province, said IS had used chlorine gas in its war against the army for the first time.

Reports previously suggested IS has over the years obtained chemicals to be used in its war against the Iraqi government seize cities. Hisham al-Hashimi, an expert on terrorist groups, pointed Al-Monitor to “the use of chlorine gas by the group [now known as IS] in 2005, in the bombings of a popular market in Abu Ghraib.”

Hashimi said, "In early 2014, IS was able to obtain large quantities of chlorine gas when it took control of water treatment plants in Fallujah and Saqlawiya, and in Mosul and Salahuddin following the fall of Mosul on June 10.”

Yet, Hashimi said it appeared that IS had not used chlorine gas “in any direct or indirect fighting” with the army. He said IS knows the gas is not that toxic, “can only kill in enclosed places, and loses its effectiveness when heat is generated from the explosion. It can only be used to induce intimidation.”

“Experts have not been able to prove its use in the battles of southern Dalouiya and Saqlawiya,” he added.

Anbar police also said that chlorine gas had not been used on the soldiers in the province.

While Maj. Gen. Ahmad Saddag al-Dulaimi, Anbar’s police chief, told Al-Monitor by phone, “We heard news that IS used chlorine gas in the Anbar battles," he said, "This news is unfounded, and chlorine gas has not been used during the battles at all.” He added, “If it indeed had happened, we would have told all media outlets about it and announced it.”

On the other hand, the Iraqi Ministry of Defense said, “Terrorist organizations used chlorine gas in some areas close to water treatment plants, but did not have an impact. For the gas to have a lethal effect, it should be used in mass quantities, which the enemy does not currently have.”

Although the ministry asserted that “no injuries were reported for now in the regions where the organization used chlorine gas,” it issued instructions “for the purpose of increasing security measures.”

In a statement obtained by Al-Monitor, the ministry advised the members of the armed forces and civilians to “cover their faces with a wet cloth to protect themselves from the potential effects [of chlorine gas]” in case they hear IS is using it.