Relief aid in Gaza failing to reach the most desperate

Palestinians in Gaza are complaining about the chaotic distribution of relief aid entering the Gaza Strip, destined for those most severely afflicted by the recent war with Israel. 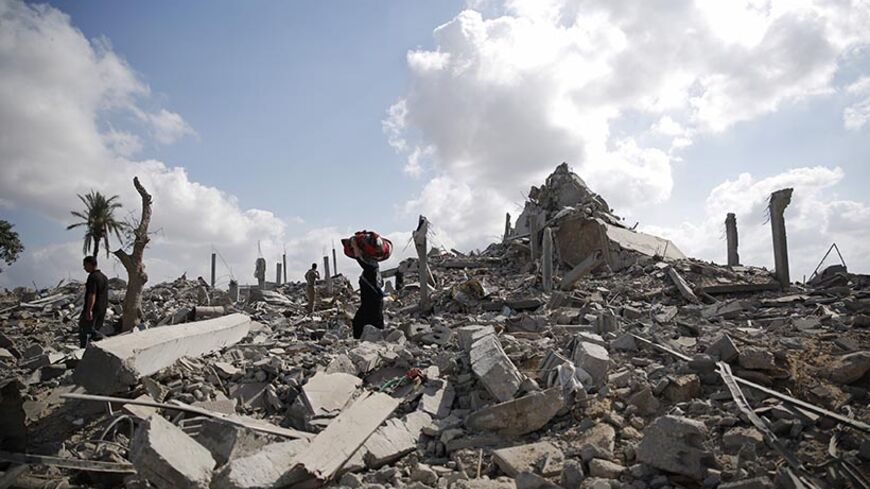 A Palestinian woman carries belongings as she walks over the rubble of buildings destroyed in the southern Gaza Strip, Aug. 3, 2014. - REUTERS/Finbarr O'Reilly

GAZA CITY, Gaza Strip — Gaza resident Zahra al-Arif, 32, is forced to go from one organization to another trying to register for relief aid. Arif is pregnant and has children; the heat is intense, making the mere act of leaving the house difficult. She lost her husband and father in Israeli shelling on July 12, and her home in the Shajaiya neighborhood was destroyed during the Israeli army's ground operation.

"My husband worked with the Palestinian Authority (PA) police and brought home all household necessities. Now I must do everything. I find myself facing life alone, and I'm eight months pregnant," she told Al-Monitor.

Arif has received nothing from the official agencies aside from food baskets, and she currently lives with her widowed mother in the Shaaf neighborhood. In their destitute home, her children show a sadness that go well beyond their years.

Arif's feelings of loneliness, after what she suffered during Operation Protective Edge, are shared by a large number of Palestinians. Many complained to Al-Monitor that they have not received any aid aside from food baskets since they lost their homes, amid what they described as a "chaotic aid distribution."

Riad al-Bitar, the official in charge of the Emergency Committee at the Ministry of Social Affairs and general director of social protection, told Al-Monitor that ministry staff and newly formed emergency committees worked around the clock during the war. These crews managed to get in touch with the people, despite the bombing and dangerous situation, to collect statistics about affected families and those wounded.

"These committees were able to provide emergency aid to those whose homes were destroyed. They also supported the residents in the border areas so that they could remain in their homes," he said.

Bitar said that when organizations distribute food parcels, it is done in coordination with the ministry, as is the case with the United Nations Relief and Works Agency for Palestine Refugees in the Near East (UNRWA), Islamic Relief Worldwide (IRW), Mercy Corps and Oxfam. The distribution of grants takes place under the ministry’s supervision in a transparent manner, he noted.

"We are working under the framework of a unified database, and our goal is for there to be no repetition whereby aid is distributed twice to the same family," he said. He clarified that the primary database includes around 50,000 families — outside the relief centers — whose homes have been entirely or partly demolished, or who have left their homes out of fear.

In addition to official efforts, a large group of individual and youth efforts were widespread during the war to distribute aid. Al-Monitor spoke with youth activist Abdel Karim Abu al-Ainayn. "Friends suggested that I carry out an online donation campaign, and this is what I did. I thought that the campaign would gather no more than $1,000, but international sympathy exceeded my expectations and in less than a month I was able to provide 600 food baskets and cleaning supplies to 600 families," he said. Abu al-Ainayn said the country that provided the most donations was the United Kingdom, followed by the Netherlands and then France, pointing out that all transactions were made via Western Union.

Al-Monitor spoke to an official, who requested anonymity due to the sensitivity of the issue, from a local organization that distributed thousands of food baskets during the war. "The Ministry of Social Affairs, unfortunately, amassed huge quantities of food parcels in its warehouses, whether [aid] given to [the ministry] or convoys given to other organizations," he said. He ssaid it was difficult for ministry staff to go out and distribute aid during the war because they were among those targeted by the occupation.

He said that a significant amount of aid entered the Gaza Strip during the war: "A million food parcels came from Kuwait alone, meaning there was a huge amount of aid and not enough staff."

He pointed out that the delay in distribution and attempt to control all aid by storing it affected its usability. Products would arrive in Gaza and one-third of their expiration dates would have already passed, including those of canned goods.

He explained that the main countries that sent aid during the war were Turkey, Qatar and Saudi Arabia, while the United Arab Emirates (UAE) preferred to communicate with organizations on the ground and not with the Ministry of Social Affairs.

For his part, Bitar responded that the aid received by relief organizations did in fact enter the ministry's warehouses, but it was later handed over to nongovernmental organizations. "We allow everyone to distribute, but only to those who are poor, displaced or affected. Priority goes to those who have not received aid previously," he said.

Economic analyst Omar Shaban wrote on his Facebook page that international monetary pledges had reached $280 million as of Aug. 28. Of that amount, $200 million has been received, with Saudi Arabia at the top of the list contributing $80 million, followed by Australia with $14 million, Germany with $13 million, the United States with $12 million, the UAE with $11 million and Kuwait with $10 million.

"Most of this money was pumped into the accounts of the PA and the Palestinian Red Crescent," Shaban said.

He said UNRWA had asked for $367 million to cope with the crisis, of which it had received $177 million. Shaban called for documenting all kinds of aid and achieving financial and administrative transparency from all parties: the donor, the recipient, the mediator and the beneficiary.

Meanwhile, those in desperate need are still waiting for assistance to arrive. Arif returned home worried. She found out that the Zakat Committee was closed, and the Qatar Foundation informed her that registering her children on the orphans’ list would be done later. Another organization said they were at full capacity of providing aid to those on their lists. Meanwhile, the Ministry of Social Affairs told Arif, "Your name is already on the list, but there is nothing new yet."