Jews suffer from Israeli policy, regardless of political affiliation

Jews abroad, regardless of their stance toward Israel, are made to bear responsibility for its policies, as some protesters do not differentiate anti-Semitism and criticism of Israel's occupation policy, nor do some right-wing Israeli politicians. 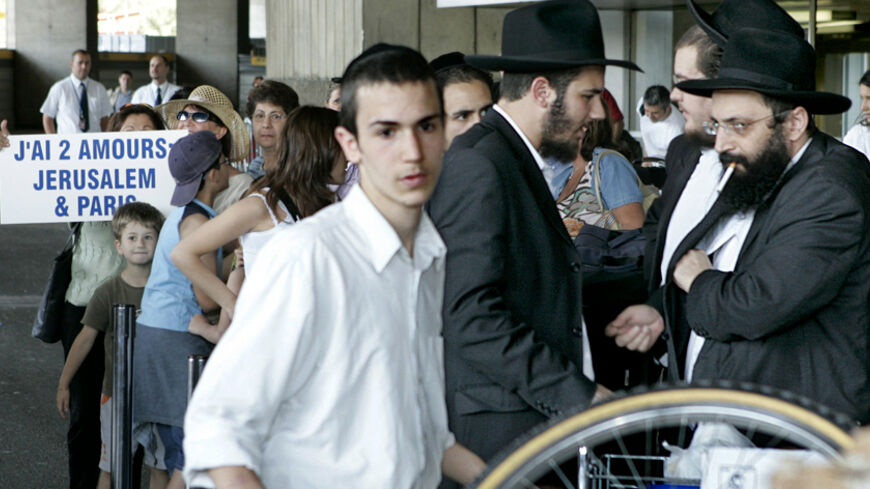 Over the past few days, news reports in France have been opening with a stunning statistic. According to current data, 1% of France’s Jewish population will immigrate to Israel this year. The total by year end is expected to reach 5,500 emigrants. This extraordinary number reflects growing fears among Jewish parents raised by reports about European jihadists, such as Mehdi Nemmouche, the Frenchman who attacked the Jewish Museum in Brussels in May 2014. It seems that many of these jihadists have adopted Mohammed Merah as their proclaimed hero, the man who murdered three children in an attack on a Jewish school in Toulouse in 2012.

The new immigrants to Israel are fully aware that the French authorities are taking action against any and all manifestations of anti-Semitism and that they condemn anti-Semitism vociferously. At the same time, however, these immigrants also know that the authorities cannot protect every Jewish child. Merah and Nemmouche personify a combination of hatred of Israel and classic anti-Semitism. This vile combination is once again making Europe an uneasy place for Jews.

Contributing to this foul quagmire are certain elements of the far left intelligentsia, along with those for whom it is fashionable to be an anti-Semite. They are joined by young hotheads who cannot distinguish between acts committed by the State of Israel and Jewish communities that have lived in the Diaspora for more than 2,000 years. It should be noted that this old Diaspora consists of Jews who support Israeli policies, others who oppose them, and yet others who are apathetic toward anything that happens outside the country in which they live.

The most unfortunate link connecting Israeli actions with the Diaspora, however, is provided by senior Israeli officials, who blur any distinction between protests against their policies and hatred of the Jewish people. Not every Jew around the world supports Israel's occupation policy. Many Jews in Israel as well as the Diaspora have expressed reservations about Israel’s disproportionate response against Gaza’s civilian population in the last war.

The previous Al-Monitor article in this series reported on a discussion that took place in the Israeli Cabinet in January over the annual report on anti-Semitism submitted by the Ministry of Jerusalem and Diaspora Affairs. Justice Minister Tzipi Livni said at the meeting that claims of anti-Semitism “are the refuge of those who don’t want a diplomatic arrangement.” She was reacting to a comment by Economy and Trade Minister Naftali Bennett, chairman of HaBayit HaYehudi, who holds the Diaspora portfolio in the Cabinet, when he said that the wave of anti-Israel boycotts were a product of anti-Semitism. Tourism Minister Uzi Landau of Yisrael Beitenu reiterated Bennett’s sentiments.

Livni, responsible for negotiations with the Palestinians, countered by arguing that the boycotts express “criticism of the decision that encourages Jewish settlement on lands that the world does not recognize as falling under Israeli sovereignty.” She added, “Anyone who ties anti-Semitism to criticism of Israel for its policies regarding the settlements is doing harm to the struggle against anti-Semitism.” It is no small matter when a senior Israeli minister rebukes her government colleagues by charging that the connections they are trying to make between the various boycotts and anti-Semitism cause harm to Jews around the world. Nevertheless, it seems as if her words fell on deaf ears at that meeting.

A short time later, Prime Minister Benjamin Netanyahu once again drew a connection between the wave of boycotts advocated by the boycotts, divestment and sanctions (BDS) movement against Israel and hatred of the Jews in Europe. He did so before a Jewish audience on two separate occasions while making thinly veiled references to the Holocaust. The first time was at a meeting of the Conference of Presidents of Major American Jewish Organizations on Feb. 17, and the second time was at the annual AIPAC conference about two weeks later, on March 4. Here are a few quotations:

The BDS movement's statement on the boycott calls for nonviolent actions against Israel, much like the actions taken against South Africa during the apartheid era. These would continue until the Israeli government takes the following steps: It recognizes the right of the Palestinian people to self-determination; obeys the principles of international law by ending the occupation and colonization of all Arab lands and dismantling the separation barrier; recognizes the basic right to full equality for the Palestinian Arab citizens living in the State of Israel; and advances the rights of Palestinian refugees to return to their homes and property on the basis of UN Resolution 194.

A June 2010 analysis conducted by the Reut Institute, an independent Israeli organization, concluded that while the BDS movement does attempt to delegitimize the State of Israel and challenges its Zionist basis, it is not an anti-Semitic movement per se. On the other hand, the NGO Monitor and others claim to have identified anti-Semitic motifs in the BDS campaign.

The Israeli political right has chosen to link the boycotts to anti-Semitism while disassociating them from the occupation and the settlements. In the same speech before the Conference of Presidents of Major American Jewish Organizations, Netanyahu asserted, “The root cause of the conflict is not the settlements, it’s not the territories. … The root cause of this conflict is the refusal to accept the right of the Jewish people to a state of their own in any boundaries.” Thus, the seizure of lands for settlements across the Green Line is irrelevant to the issue.

The linkage between Israel and world Jewry has created a sense that the onus of responsibility for Israel’s actions, including its misdeeds, is shared with the Jewish Diaspora. One chilling example of this belief was the attack on the Jewish Community Center in Buenos Aires in 1994 in revenge for the assassination of Hezbollah leader Abbas al-Musawi.

In summation, nothing can justify harming anyone in any way whatsoever because of his national or religious affiliation. One must not accept that many Jews throughout Europe will be fraught with fear as they make their way to the synagogue during the coming High Holidays. Nothing can justify violating the rights of another people to freedom and self-determination. Not all anti-Semitism has its roots in Israel’s behavior, and not all criticism of Israel has its roots in anti-Semitism. Supporters of the occupation should not recruit the help of Jews around the world. Anti-Semitism is far too serious an affliction for us to turn the fight against it into a political weapon.