Turkey’s Kurdish movement is proving to be the only force resolved to fight the Islamic State, while boosting its political might in Turkey. 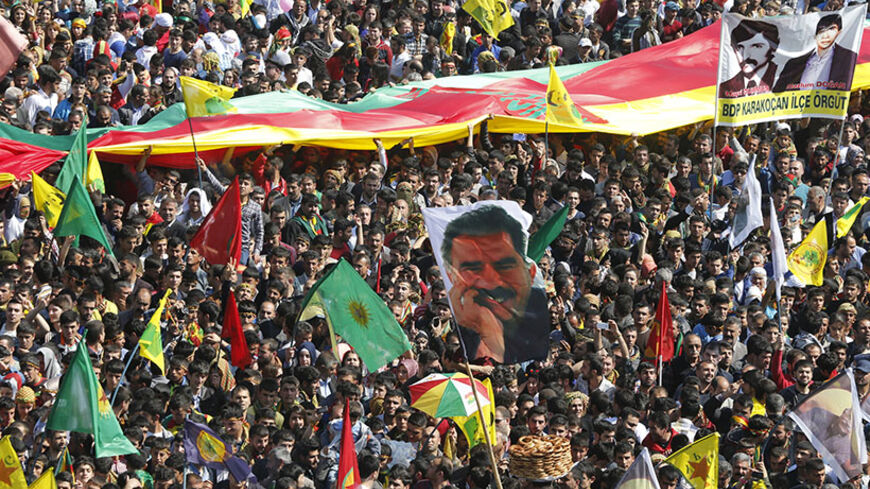 The world is apprehensively watching the dramatic rise and expansion of the Islamic State (IS) in Iraq and Syria. The jihadists becoming the No. 1 threat to global security is no doubt a grave development and an appropriate focus of international attention. Yet, the jihadist threat should not overshadow the interrelated rise of another power in the region: Turkey’s Kurdish movement, the Kurdistan Workers Party (PKK).

Created in 1978 by Abdullah Ocalan and his comrades, the PKK started out as an armed, leftist, separatist organization. Since then, it has evolved into a movement that today enjoys political and military might and a popular base across all the Kurdish-populated regions in the Middle East. The PKK’s armed insurgency in Turkey that began in 1984 has gone through ups and downs marked by periods of serious bloodshed. The PKK is currently in a “state of non-conflict” as part of its engagement in the “peace and settlement process” the Justice and Development Party (AKP) government initiated in 2012.

The rise of the Kurdish movement is underway on two tracks simultaneously, manifesting itself in different forms on each. The first is Turkey, and the second is Iraq and Syria.

A major landmark on the Turkey track was the Aug. 10 presidential election, in which Selahattin Demirtas, the candidate of the People's Democracy Party (HDP), an offshoot of the Kurdish movement, scored a major success. Demirtas, the HDP's co-chair, mustered 9.8% of the vote, boosting by half the 6.44% his party won in the March 30 local elections — an outcome that has the potential to change existing equations and calculations in Turkish politics.

On the Syria-Iraq track, the PKK has emerged as the sole power capable of confronting and stopping the jihadist expansion in the past two years. In Rojava, the Kurdish-populated region in northern Syria, the PKK has fought the jihadists since the summer of 2012. In Iraq, it has only recently arrived on the scene following IS’ capture of Mosul and its ensuing thrust into Kurdish areas. With Iraqi Kurdish peshmerga forces retreating without a fight, the PKK became the force to stop IS, putting up a particularly notable resistance in Sinjar.

The PKK’s military showing in Syria and Iraq has made it a power to be reckoned with in the Middle East, while Demirtas’ political success in Turkey has paved the way for the HDP to grow into a nationwide party. Both achievements were made possible thanks to the same resources. Hence, an understanding of one track gives a better understanding of the other.

The HDP is a legacy but not a successor of the Peace and Democracy Party (BDP), which continues to legally exist. The BDP is a Kurdish regional party, while the HDP claims to be an all-Turkey party. Demirtas fleshed out that claim with an election campaign based on a vision of a pluralist, inclusive, libertarian and egalitarian Turkey. He ran as a candidate of Kurdish ethnicity, but what he demanded for the Kurds he demanded for everyone in a united Turkey, linking the solution of the Kurdish issue to the solution of Turkey’s democracy crisis. By doing so, he managed to build a leftist opposition front that opened up the HDP to voters beyond the party’s traditional Kurdish constituency. The opening was also helped by the HDP leadership's makeup already representing an alliance between Kurds and the Turkish left in a nucleus form.

As a result, Demirtas managed to add 1 million votes to the 2.8 million his party had garnered in the municipal polls, demonstrating that the HDP has begun to build bonds with the country’s ethnically Turkish west.

Demirtas’ votes elevated the HDP to a notch below the 10% threshold that parties are required to pass to win parliamentary seats in the general elections. Support for him was no doubt also partially boosted by disenchanted Alevi and leftist supporters of the main opposition Republican People’s Party (CHP), who voted for the HDP in protest of the CHP’s decision to align with the Nationalist Action Party (MHP) and field a joint candidate, the conservative Ekmeleddin Ihsanoglu.

Kurdish parties in Turkey have traditionally mustered about 5% or 6% of the vote, which leaves them below the parliamentary threshold. To circumvent the 10% barrier, they have contested the general elections with independent candidates, who, once in parliament, regroup under the party banner. Now, for the first time, HDP representatives are raising the possibility of entering the 2015 elections as a party.

If the HDP does run as a party and succeeds in passing the vote requirement, the political balance in Turkey can change to the AKP’s detriment. An eligible HDP is expected to mean at least 20 additional parliamentary seats for the party from the Kurdish-majority southeast. Due to the twists of the electoral system, those seats have so far ended up in the hands of the AKP, the only party that rivals the Kurdish movement in the southeast. Twenty seats fewer for the AKP in the next parliament could strip the ruling party from the majority it requires to unilaterally draw up a new constitution introducing the presidential system Recep Tayyip Erdogan craves and take it to a referendum.

To achieve all this, the HDP needs to make further strides toward becoming a major party with a nationwide appeal. This will depend on certain conditions:

First, the HDP will need time, which means the general elections should be held on schedule, in June 2015, and not moved up. Second, the “state of non-conflict” should continue. Third, the party’s political line of anti-government opposition should be sustained and strengthened. And last, the HDP base should transform itself to embrace a new, inclusive political culture in which Kurdish demands are seen and advocated as part of a shared vision for a democratic Turkey.

With the PKK’s armed wing and its jailed leader Ocalan standing out as the two major Kurdish actors, their legal political wing could establish itself as a third one by luring support from western Turkey, a prospect that could encourage more pluralist trends.

The AKP government’s policies have catalyzed the Kurdish movement’s growing influence in Turkey and the region. In Turkey, this happened through the “peace and settlement process,” while in Syria, the catalyst was Ankara’s hostility to the autonomy drive launched in the summer of 2012 by the Democratic Union Party (PYD), the PKK’s Syrian branch.

The PYD has long contended that Jabhat al-Nusra and IS jihadists, who began attacking Syrian Kurds in the summer of 2012, receive support from Ankara and are allowed to use Turkish territory to mount their attacks.

Those claims are quite credible. It is hard to imagine how the jihadists would have managed to put strong military pressure on the People’s Protection Units (YPG), the PYD’s armed wing, in areas neighboring Turkey — Ras al-Ain, Kobani and Afrin — without using Turkish territory. Yet, the PYD has been able to hold on to these three regions and resist the jihadists for more than two years. Hence, long before IS’ capture of Mosul, the PKK already deserved to be recognized as the Middle East’s only fighting force to defy and resist IS for the struggle it has waged in Rojava.

The Kurdish forces in Syria have surprised the world not only with their resolve against the jihadists but also with their female fighters. Against a barbarian mindset that enslaves and sells women as concubines, the PYD has displayed a secular mindset embracing gender equality, which has enormously contributed to its international image.

In Iraq, on the other hand, the PKK has put aside disagreements with the Kurdistan Democratic Party (KDP) to form a national military alliance against the jihadist threat to Iraqi Kurdistan.

That the Western public is already discussing the prospect of the PKK’s removal from the lists of terrorist organizations is a clear indication of how much the PKK’s struggle against the jihadists has contributed to its international standing.