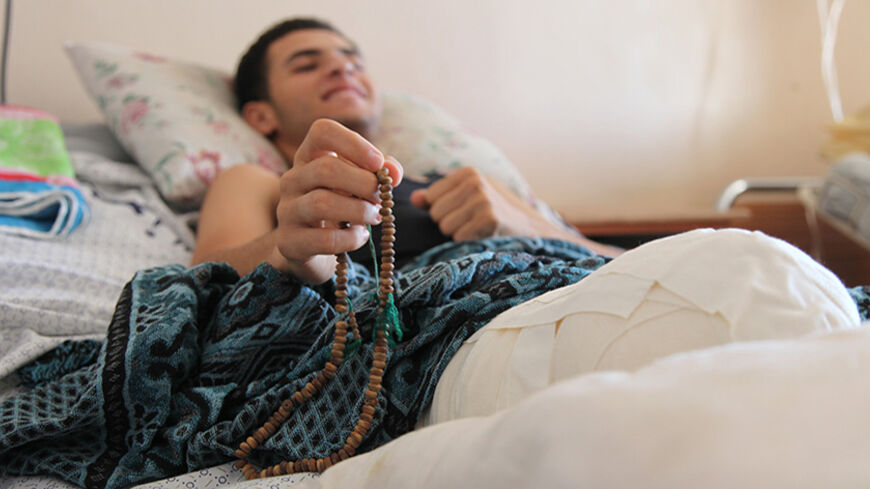 20-year-old Abed al-Gawaad recovers in Al-Shifa Hospital after his home in Dar al-Galah, at the center of the Gaza Strip, was hit by a missile, Aug. 7, 2014. - Wissam Nassar

GAZA CITY, Gaza Strip — Doctors and human rights activists believe that they have conclusive evidence that Israel used internationally banned weapons against civilians during its military aggression on the Gaza Strip, as it did during the previous two wars against Gaza in 2008-2009 and 2012.

Since the start of the Israeli military operation, more than 1,939 Palestinians have been killed and 9,800 others injured. Hundreds of the victims arrived at hospitals as charred corpses or in pieces, or with lost limbs and wounds that were difficult to treat, Ministry of Health spokesman Ashraf al-Qadra told Al-Monitor .

Controversy erupted when Norwegian Dr. Erik Fosse, who recently visited Gaza to treat the wounded, accused Israel of using internationally prohibited weapons in its ongoing assault on the Gaza Strip.

During a press conference on July 13 at Al-Shifa Hospital, attended by Al-Monitor, Dr. Fosse said, “Many of the casualties that have arrived at the hospital confirm Israel's use of internationally banned weapons of the [Dense Inert Metal Explosive] DIME variety."

Testimony given to Al-Monitor by Palestinian nurses, doctors and human rights activists indicate that the Israeli army used DIMEs, which causes the loss of limbs and leads to wounds that do not respond to treatment. 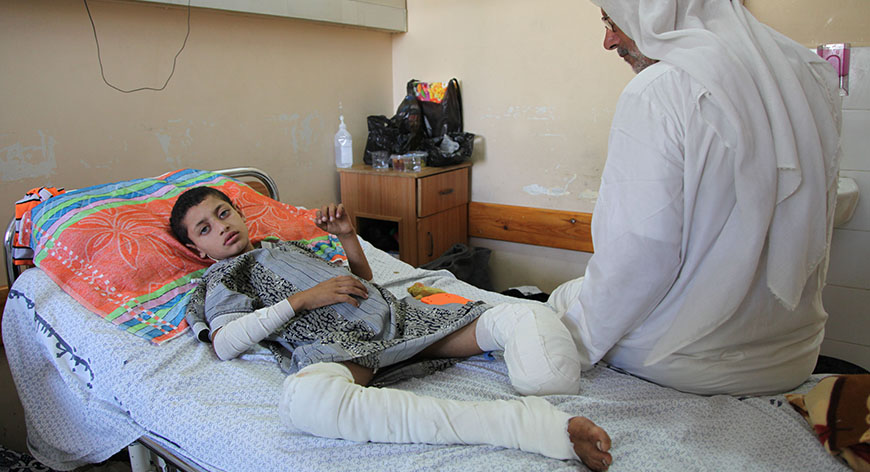 Nine-year-old Ibraheem Hattab lost his leg when a missile struck where he was playing with his friends. (photo by Wissam Nassar)

DIME weapons "kill their victims through the amputation of limbs in a way that resembles an automated saw. As for those who are able to survive, they are vulnerable to cancer because [the weapons] contain carcinogenic tungsten," reads a July 21 report by Al Jazeera.

Al-Monitor’s two-hour stay at Al-Shifa Hospital in Gaza saw the arrival of 11 civilians, all with amputated limbs, eight of whom died shortly after their arrival. The amputation areas had similar disctinctive patterns. The skin was charred and the tissues extremely damaged, while the bones looked as if they had been sawed.

Mohsen Ibrahim was wounded by shrapnel from an Israeli missile that landed in a populated area of the Abed Rabbo farm in the northern Gaza Strip. "I was listening to the radio at home when rocket shrapnel penetrated the wall of my house and hit my leg, requiring that it be immediately amputated," he told Al-Monitor.

Dr. Ayman al-Sahbani, a surgeon who has dealt with dozens of similar cases at Al-Shifa Hospital, said, “The doctors are forced to amputate body parts of the wounded, as the treatment of these wounds is hard and sometimes threatens the life of the injured.”

Dr. Sahbani told Al-Monitor that the marks and wounds on the bodies of the dead and injured confirm the use of DIMEs by the Israeli army. “The Israeli army indeed used DIME weapons, as some bodies arrived at the hospital amputated with a distinct smell. We have dealt with wounds that can't be healed,” he added.

“In addition to the use of DIMEs, which we have proven, we have seen other indicators that prove the use of other lethal weapons that we have yet to identify. We received bodies with strange wounds, some of them charred while others were exposed to nail shrapnel. Some bodies even arrived at the hospital beheaded, and others have been crushed, as if a huge rock had fallen on them,” he said.

Dr. Sahbani noted that he and other surgeons had never seen such injuries, noting that most of those hospitalized suffered from serious injuries, leading either to death or to permanent disabilities.

Young Muhannad Abu Amara is bedridden at Al-Shifa Hospital awaiting his unknown fate. His hand was severely injured during an aerial attack on the Shajaiya neighborhood in eastern Gaza, and doctors are carefully monitoring him.

“The doctors told me that the wound is not responding to treatment and is gradually getting worse, which may soon require amputation. Amputation is needed to save my life,” he told Al-Monitor.

Dr. Fosse said at the press conference, "We were here during the last two wars against the Gaza Strip. We saw the same injuries, and through analysis by international laboratories we confirmed that Israel used this type of internationally banned weapon."

This assertion was confirmed by the Goldstone Report, published by a UN fact-finding mission after the 2009 war. It concluded that DIME weapons were used by Israeli forces. According to Article 907 of the report, "DIME weapons consist of a carbon-fiber casing filled with a homogenous mixture of an explosive material and small particles, basically a powder, of a heavy metal, for instance, a tungsten alloy. … The tungsten powder tears apart anything it hits. The impact of such weapons in general causes very severe wounds."

The general director of the Palestinian Ministry of Health, Medhat Abbas, concurred with Dr. Fosse's statements, saying, "There is ample evidence of Israel's use of internationally banned DIME weapons."

He added, “Among the injuries confirming the use of DIMEs were second and third-degree burns and losses of upper and lower limbs. The clinical response of the injured bodies to treatment cannot be understood. For instance, while the wound is supposed to heal with antibiotics, it expands in a dangerous way that threatens the life of the injured.”

The Convention on Prohibitions or Restrictions on the Use of Certain Conventional Weapons, ratified by the UN General Assembly in October 1980, prohibits "the employment in armed conflicts of weapons, projectiles and material and methods of warfare of a nature to cause superfluous injury or unnecessary suffering."

Imad al-Gharbawi, a volunteer medic, relayed to Al-Monitor his experience with the removal of the dead and wounded from the rubble of their homes, saying, "The bodies came apart in our hands as we removed them from the rubble, and their burns and wounds gave off a strange, unfamiliar stench."

In a report issued in February 2009 regarding DIME weapons, Amnesty International noted, "If it were determined that such weapons cause superfluous injury or unnecessary suffering, or if they violate the provisions of the Protocol on Non-Detectable Fragments (Protocol I to the Convention on Conventional Weapons) of Oct. 10, 1980, then their use even against combatants, not only civilians, would be prohibited."

Rami Abdo, the director of the Euro-Mediterranean Human Rights Network, told Al-Monitor, “Based on doctors’ testimonies on the use of DIME weapons, the wounds found on the bodies of martyrs and injured confirm that the use of this weapon, particularly in areas teeming with civilians, contradicts Article 32 of the Fourth Geneva Convention,” noting, “Article 147 of the convention considers these acts a serious violation.”

Article 32 of the Geneva Convention prohibits "taking any measure of such a character as to cause the physical suffering or extermination of protected persons in [the hands of parties to the conflict]."

Abbas noted that efforts are being exerted to prove the usage of other weapons during the aggression on Gaza, saying, “The medical staff is currently conducting several laboratory tests on samples from the bodies of the martyrs to discover the other types of lethal weapons used against them, calling on the UN to form a fact-finding committee regarding Israel's use of these banned weapons and munitions.”