After weeks of rocket fire, the Israeli public, including many in the left, feel that the peace camp has no adequate proposals and can offer no updated paradigm for a diplomatic solution. 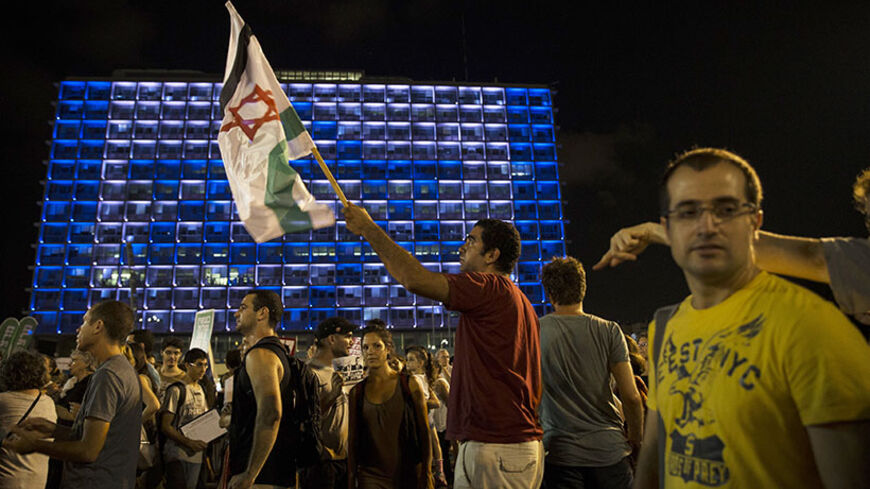 At the end of the demonstration by left-wing groups at Rabin Square on the night of Aug. 16, the general director of nongovernmental organization Peace Now released a brief announcement to the news media. In it, he said that he and his colleagues were surprised and encouraged by the large number of demonstrators and that, “Tonight the left proved that ‘the more they were oppressed, the more they multiplied and spread’ [Exodus 1:12].” But in his statement, Director-General Yariv Oppenheimer sounded as if he were trying to encourage himself most of all. At best, there were no more than 7,000 people at the demonstration protesting Operation Protective Edge, under the banner of “changing direction toward Peace.”

Oppenheimer heads the movement that organized the “Demonstration of the 400,000” just 32 years ago, after the massacre in Sabra and Shatila, during the First Lebanon War. He should be worried about the continued dwindling of the peace camp, and how it is getting further and further away from the Israeli mainstream. Speakers at the 1982 demonstration included key figures from the Labor Party, which was then in the opposition, among them Yitzhak Rabin (prime minister when he was later assassinated) and Shimon Peres (president until last month). The current chairman of the Labor Party, Knesset member Isaac Herzog, was nowhere to be found at the Aug. 16 demonstration, nor were other senior members of the party.

The politicians who did speak were the chairwoman of Meretz, Knesset member Zehava Gal-On, and the leader of the Hadash Party, Knesset member Mohammad Barakeh. All in all, it was a political mix that positioned the demonstration from its very outset as a protest by the far left. Given that, it was hard not to recall the peace camp’s show of force at the demonstration in support of the Oslo Accord on Nov. 4, 1995, on the evening of which Rabin was assassinated, or the mass demonstrations held in his memory for many years after that.

It has been years since the peace camp has been able to get any significant number of protesters to take to the streets. The last time that Rabin Square was filled to overflowing was on the night that Ehud Barak was elected prime minister in May 1999, after he defeated Benjamin Netanyahu. Standing before an exuberant crowd, which arrived spontaneously at the site where Rabin had been assassinated four years earlier, Barak delivered his victory speech, which began with the memorable words, “This is the dawn of a new day.”

Barak, leader of the “peace camp,” returned humiliated a year later from the failure of the Camp David conference with PLO leader Yasser Arafat. The second intifada broke out just a short time after that. The chairman of the Labor Party crashed both publicly and politically, and the peace camp was dealt such a resounding blow that it has yet to recover. Barak accused Arafat of blowing up the peace talks and encouraging violence. Barak succeeded in etching the saying that there is “no partner” on the Palestinian side into the consciousness of the Israeli public. And at the same time, many Israelis are unaware that the settlement enterprise keeps thriving, with the number of settlers growing from 200,000 in 2001 to 325,000 today.

The second intifada cost the lives of about 1,100 Israelis in bloody terrorist attacks in the heart of Israel’s urban communities. At the same time, it also alienated the Israeli public from the idea of a two-state solution, on which the diplomatic approach of the Zionist left was built.

The paradigm enjoyed a revival of sorts during Ehud Olmert’s term in office, when he offered Palestinian Authority (PA) President Mahmoud Abbas a far-reaching plan to partition the land. But Olmert also got the cold shoulder from the Palestinians, and the peace camp was thrown into disarray yet again. When Abbas explained that he did not accept the proposal because he believed those were the final days of Olmert’s term in office, Israelis simply wouldn’t listen anymore.

Speaking at the 2006 memorial gathering for Yitzhak Rabin, just two months after the Second Lebanon War, was the noted author David Grossman, who had lost his son Uri in that war. Grossman pleaded with Olmert to make peace with the Palestinians, saying, “Go to the Palestinians, Mr. Olmert, do not search all the time for reasons for not to talk to them. You backed down on the unilateral convergence, and that's a good thing, but do not leave a vacuum. It will be occupied instantly with violence, destruction. Talk to them, make them an offer their moderates can accept. … Make them an offer that will force them to choose between accepting it or preferring to remain hostage to fanatical Islam. Approach them with the bravest and most serious plan Israel can offer.”

Olmert, who was then head of the Kadima Party, did just about everything that Grossman pleaded with him to do. He was the Israeli prime minister who was willing to go the furthest to reach a permanent agreement with the Palestinians.

Since then, Grossman has become the voice of the peace camp. He has made a point of attending every demonstration carrying this message since then, and he writes frequent opinion pieces in the papers in the spirit of the peace camp’s message. He certainly wasn’t absent from the Aug. 16 demonstration. In fact, he was the keynote speaker, calling on the government to offer the Palestinians, “a big, farsighted, productive plan, with genuine proposals.”

The thing is that even people in the center, who want there to be a diplomatic process, like people who voted for the Yesh Atid Party or even the Labor Party, say to themselves, “We’ve seen this film before. We already made our most far-reaching offers, and we got terrorism in return.'' Statements like that aren’t limited to the right anymore, and the left-wing camp that demonstrated on Aug. 16 no longer has any convincing responses. This gap between the camps only got sharper after weeks of rocket and mortar fire on Israel’s civilian population in yet another round of violence between Israel and Hamas.

There’s a feeling within the Israeli public that the peace camp is stuck in a different era and caught up in approaches that were formulated in the 1990s, when the negotiations in Oslo were underway, and agreements were being signed with the PA. The supporters of peace haven’t revised their messages, and they haven't raised any fresh ideas. They have yet to come up with an updated, new paradigm that can break through the conceptual gridlock in the search for a diplomatic solution. At this point, it doesn’t look like they will be able to create a counterweight to a rejuvenated right under Economy and Trade Minister Naftali Bennett. Instead of becoming relevant again, this important camp, which always led the left and determined its course, is losing touch with its supporters.