Gaza war was built on lies

Israeli Prime Minister Benjamin Netanyahu has repeatedly made accusations without providing evidence that helped lead to the Gaza war. 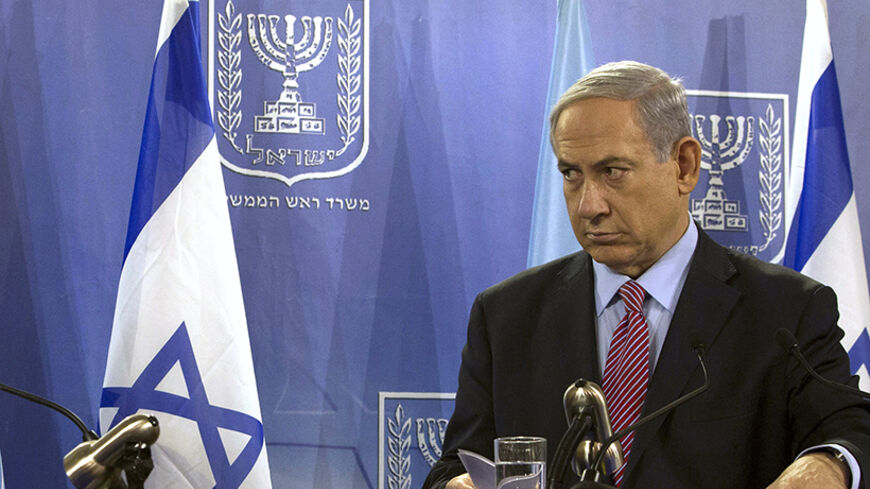 Israel’s war on the Gaza Strip began, continued and is ending on a lie. The chief liar and man responsible for the disproportionate use of Israeli firepower that has resulted in nearly 2,000 Palestinian deaths — mostly civilians — versus three Israeli civilians, is none other than Israeli Prime Minister Benjamin Netanyahu.

While the war in Gaza began on June 29, the incitement for the war began when Israel’s prime minister irresponsibly accused the Gaza-based Islamic Hamas movement of being responsible for what was declared a kidnapping of three Israelis. The three were apparently hitchhiking in areas under Israeli military control in the West Bank on June 12 when they were taken by yet to be identified kidnappers and apparently killed shortly thereafter. One of the three Israelis called the police and the sound of gunfire is heard on the phone call. Netanyahu immediately placed a gag order on the deaths.

Writing in the Jewish Daily Forward, J.J. Goldberg talks about how “politics and lies” triggered the war in Gaza. “Journalists who heard rumors [about the emergency call] were told the Shin Bet wanted the gag order to aid the search. For public consumption, the official word was that Israel was 'acting on the assumption that they’re alive.' It was, simply put, a lie,” Goldberg wrote.

Two weeks after the kidnapping and plenty of anti-Hamas rhetoric later, the war on Gaza began based on a falsification of the reality. After arresting hundreds of Palestinians and daily shellings of Gaza, the situation escalated on June 29 when an Israeli attack caused the death of a Palestinian in Gaza. The following day, Hamas, after being silent since the November 2012 cease-fire, responded with a barrage of rockets. Israel jumped on this act, making it the justification for war. Nothing is said anymore about the preceding days of consecutive shelling that had been based on a lie that Gaza’s Hamas leadership had ordered the kidnapping and killing of the three Israelis.

Truth is, the first casualty of war and the war on Gaza is no exception. The Israelis said that they were attempting to “hit Hamas hard,” but in reality they bludgeoned Palestinian civilians who have nothing to do with Hamas. The number of Hamas militants killed in the war pales compared to those of civilians, including nearly 300 children, who were murdered simply because Israel didn’t care about who was on the receiving end of their attacks.

The next set of lies came at the near end of the Israeli war on Gaza, on Aug. 2, the day a 72-hour truce was to take effect. Israel claims that one of its soldiers was kidnapped 90 minutes after the start of a humanitarian truce. Hamas said it had confronted Israeli soldiers deep in Rafah at 7 a.m., an hour before the truce was due to start, and at 7:34 a.m. had tweeted about it. Hamas said it was unaware of any Israeli soldiers being kidnapped, suggesting that the soldier might have been killed in the clashes. Israel responded with one of the most vicious attacks on the people of Rafah, causing the death of nearly 100 Palestinians, mostly civilians. A political storm was created that reached a pinnacle with the US president and UN secretary-general "demanding" that Hamas return the captured Israeli soldier unconditionally.

However, after the massive and disproportionate use of firepower and political muscle, Israel suddenly came around and admitted to what Hamas had said, namely that the Israeli soldier was killed and hurriedly held a funeral service for him Sunday afternoon. Hours earlier, Israeli media reported that Netanyahu had screamed at Dan Shapiro, US ambassador in Tel Aviv, telling him that the United States should never second-guess Israel regarding Hamas again.

These series of untruths are not new for Netanyahu. In his attempts to demonize the Hamas movement, Israel’s prime minister compared it to the radical Islamic State (IS) and al-Qaeda, a fact that bears no truth in reality by all factual measures. In fact, Al-Monitor’s Ali Mamouri wrote that IS considers Hamas apostates and their fighters burned the Palestinian flag during the current war.

Peter Jenkins, a veteran British diplomat, wrote about 35 questionable assertions made by Netanyahu during his UN General Assembly speech in October 2013 on Iran's nuclear program, and the need for the Palestinians to recognize Israel as a Jewish state to achieve peace.

Washington fact checkers were again after Netanyahu in May 2014 when he called the Boycott, Divestment and Sanctions (BDS) movement anti-Semitic. “The passion with which Netanyahu ridiculed Israel’s neighbors, admonished Iran and dismissed the BDS movement as 'anti-Semitic' … reveals just how much he stands to lose if actual facts are discussed. The time is coming when lies no longer will suffice,” concluded Dale Sprusansky, assistant editor of the Washington Report on Middle East Affairs, in a column focusing on five lies in Netanyahu’s May American Israel Public Affairs Committee (AIPAC) speech.

Added to that was US President Barack Obama and former French President Nicolas Sarkozy being caught on a hot mic in 2011 agreeing that Netanyahu is a liar.

Politicians are known to give misleading information and to exaggerate. Mainstream media usually keeps most politicians honest by regularly fact checking their statements. Netanyahu rarely gets fact checked and is often allowed to get away with blatant lies spoken as the truth. The lies of the past month have cost thousands of deaths and injuries. It is no longer acceptable that of all the leaders of the world, Israel’s prime minister is given a pass. The truth must be told and, as the United Nations has said, those responsible for war crimes in Gaza must be held accountable. Hiding behind clever words and deceitful statements should no longer be permitted.