Interior Minister Abdolreza Rahmani Fazli has admitted that Iran sent advisers to Iraqi Kurdistan at the request of Kurdish officials. 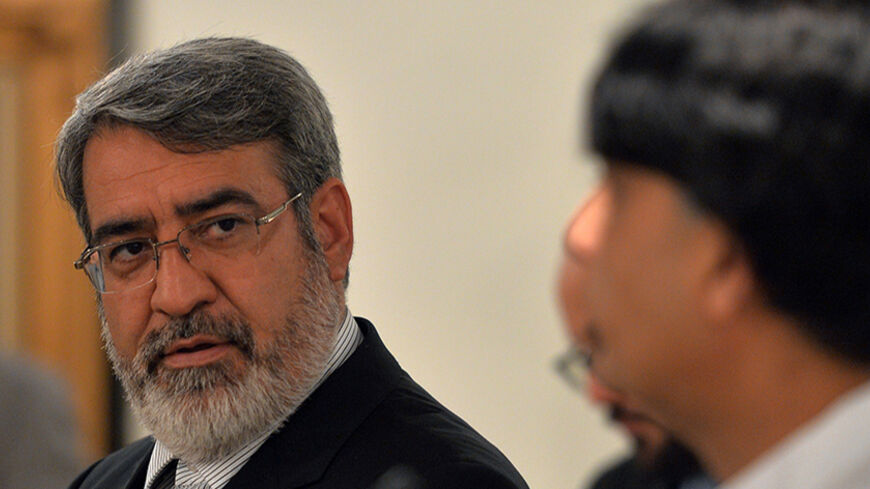 After Iran’s Foreign Minister Mohammad Javad Zarif denied that Iran had sent troops into Iraq, Interior Minister Abdolreza Rahmani Fazli said that advisers had been sent into Iraqi Kurdistan at the request of the Kurdistan Regional Government. At the meeting with provincial officials in Qom, Fazli also related that President Hassan Rouhani had drawn a red line at the fall of Shiite holy cities Karbala and Najaf.

On Aug. 25, Fazli said that when the Islamic State group (IS) "attacked Iraqi Kurdistan, Kurdish officials requested help from Iran. And the Islamic Republic, in addition to providing advisers, organized their forces."

On Aug. 24, according to Agence France-Presse, Zarif, while on a trip to Baghdad, had said during a press conference with his Iraqi counterpart Hoshyar Zebari that Iran was “cooperating and working … with the Iraqi government and Kurdish government” to fight IS, adding, “We do not believe that they need the presence of Iranian soldiers in order to do this task.”

At a press conference with Zarif today, Aug. 26, Kurdistan President Massoud Barzani said, “We asked for weapons and Iran was the first country to provide us with weapons.”

According to Qom Farda, Fazli also said, “One day they brought news that there is a possibility that Karbala and Najaf would fall. At that session, the president said that this is our red line and if something like this happens there will be no limit to our operations.”

There has been speculation that the secretary of Iran’s Supreme National Security Council, Ali Shamkhani, is now playing a larger role in Iran’s Iraq file. Previously, the commander of the Quds Force of the Revolutionary Guard Corps, Qassem Soleimani, had been believed to be the most significant Iranian figure involved.

However, given the political and military setbacks under the government of former Iraqi Prime Minister Nouri al-Maliki, a politician for which Soleimani and Iran in general had advocated, it appears that Iran is attempting to use a seasoned politician to address this crisis. Shamkhani is an ethnic Arab and has a better relationship than other Iranian politicians with Arab leaders in the Persian Gulf.

Fazli described Iraq as very important for Iran, adding, “We had a timely presence, and there were days we were worried about the fall of pilgrimage cities. Six [Iraqi army] divisions surrendered and differences inside Iraq and international pressure was high, and it was only Iran and Hezbollah that supported Iraq’s government.”