Recep Tayyip Erdogan's presidential election victory is unlikely to bring a period of political calm and stability to Turkey in the foreseeable future. 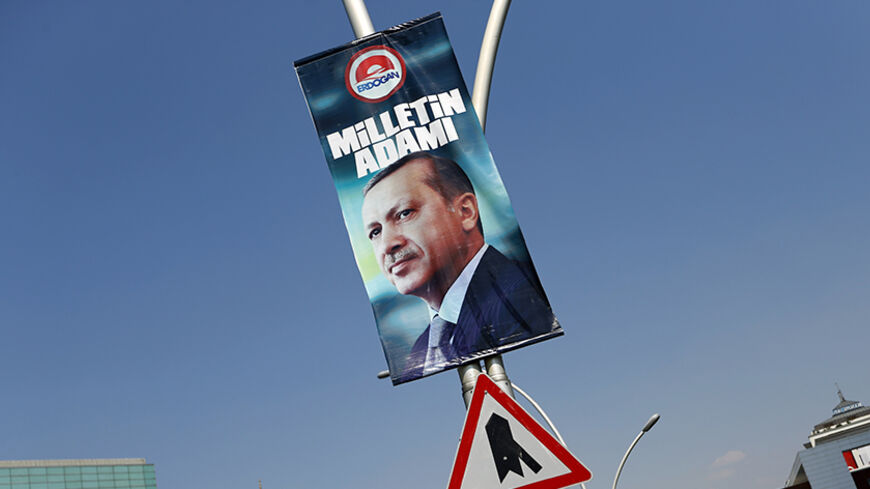 A presidential election campaign banner of Turkey's Prime Minister Recep Tayyip Erdogan, with a slogan that reads "Man of the nation", hangs on a street near his ruling AK Party headquarters in Ankara, Aug. 11, 2014. - REUTERS/Murad Sezer

The key question about Turkey’s first direct presidential elections was never centered on whether Prime Minister Recep Tayyip Erdogan, the main contender, would win or lose. He was always slated to win and he did, with 52% of the vote in the first round of voting in the elections on Aug. 10.

His popularity among Turkey’s conservative and devoutly Islamic masses, combined with the fact that he used all the political advantages of being in power in full against his rivals, ensured an outcome that was apparent weeks in advance.

The debate as to whether these elections were totally fair can nevertheless be expected to linger for some time as Erdogan’s critics point to the democratic shortcomings during the period of campaigning for the presidency.

Those shortcomings were also underscored by international organizations, such as the Organization for Security and Cooperation in Europe (OSCE) and the Parliamentary Assembly of the Council of Europe (PACE), in reports they issued prior to the elections indicating that government resources were used for Erdogan’s campaign.

Given his by now well-established reputation as a caustic politician who does not mince his words or stay his hand against his rivals, many also expect Erdogan to continue to fan the flames of division in Turkey despite his claim that following his victory he will be everyone’s president.

Having not only paraded his Islamist credentials, but also gone vindictively on the warpath against social groups he considers to be his natural enemies, all eyes will be on him now to see if he can indeed become the impartial leader of a genuinely secular and democratic Turkey.

Another problem that Erdogan faces is the fact that he has a strong accumulation of negative international expectations to contend with, which means he will also have to transform the bellicose image he has built for himself — especially in the West — to be seen as the respected and influential world leader he no doubt wants to be.

Continually hitting at the West, as well as the current regimes in the Middle East — a tactic he carried to new heights during the Gaza crisis — may have enhanced his image among his Turkish supporters. But Erdogan will find out, unless he changes his ways, of course, that this kind of populism will come at a price for Turkey.

Turkey has also entered into politically uncharted territory with these presidential elections, given Erdogan’s openly declared intention to use executive powers, as “the elected leader of the nation,” even though the present constitution does not allow for this.

Turkey today has a popularly elected president with executive ambitions, and an elected prime minister in whom executive powers are legally vested. How this will work, without one starting to step on the other’s toes sooner or later, is a question that even many members of the ruling Justice and Development Party (AKP) do not have a clear answer for yet.

The bottom line is that for this system to work de facto — if not de jure — at least until the next parliamentary elections, Erdogan needs a compliant prime minister to realize his political ambitions. This means that all attention will now be focused on the question of who takes over the AKP's leadership.

That person, who is expected to be selected by Erdogan himself — or at least approved by him — in the coming weeks, will have to follow presidential directives without question. More crucially, however, he will also have to avert a leadership struggle within the AKP and keep it unified as it prepares for the next parliamentary elections planned for 2015.

The name of outgoing President Abdullah Gul, who together with Erdogan is a founding member of the AKP, has been mentioned most frequently in this context as the most likely person who can maintain party unity. Gul, however, continues to appear reluctant to assume that role and consequently become a prime minister who would be at Erdogan’s beck and call.

Recent speculation from quarters close to the AKP also indicates that Erdogan may not be too enthusiastic about Gul either, given the fact that Gul would be reluctant to carry out his directives without question. The question of who will become the AKP’s new leader will therefore remain a crucial one in the coming days, especially now that all of the AKP’s energies will be focused on a strong win in the next parliamentary elections.

There is some suggestion that the date of those elections may be brought forward by the government to strike while the iron is hot after Erdogan’s first-round victory in the race for the presidency. Regardless of whether the date is brought forward or not, however, the AKP needs to win at least a two-thirds majority in parliament in these elections, whenever they are held.

This is necessary to change the constitution and transform the current system in Turkey into the de jure presidential one that Erdogan desires. The risk for Erdogan is that if this can't be achieved he will find himself trapped in the presidency, unable to exercise the powers he wants to use due to obstacles that will be placed in front of him by the Constitutional Court. The highest court of the land remains immune to government pressures today.

Erdogan will nevertheless try to exercise all the powers he can until the next general elections by relying on the current strong position of the AKP in parliament, even though it does not have the necessary numbers to change the constitution on its own. Meanwhile, his supporters will justify this by insisting that Erdogan’s powers come from “the nation” that voted for him overwhelmingly.

They will argue that Erdogan’s exercise of executive powers is legitimate because he never made a secret of his intentions to use these powers before the elections. The strong result he got in the elections, his supporters will insist, shows that the nation elected him for this purpose.

None of this will prevent the opposition from opposing Erdogan and applying to the Constitutional Court to have his decrees and directives annulled if these are seen to be exceeding constitutional limits. This in turn will ensure that political tensions in Turkey will continue as Erdogan reveals his intention of taking control over the entire executive branch.

Erdogan’s election as president, despite his ballot box victory, is therefore unlikely to usher in the period of political calm and stability that many Turks desire in the foreseeable future.