The rebel-held town of Marea in the Aleppo countryside — the last supply line for the rebels to Turkey — is at risk of falling to the Islamic State. 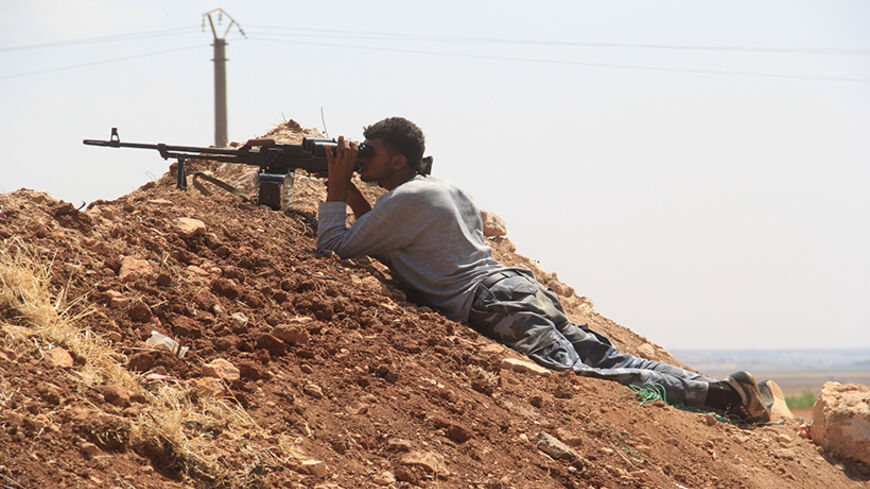 An opposition fighter faces the Islamic State on the battlefield in the northern countryside of Aleppo, Aug. 18, 2014. - Mohammed al-Khatieb

MAREA, Syria — A state of tension and cautious anticipation prevails in the town of Marea, north of Aleppo, as the Islamic State (IS) has reached the city's outskirts. Marea was among the first Syrian regions that shifted from peaceful to armed uprising against the regime in Aleppo three years ago.

In one of the halls on the outskirts of the city, a group of men is helping prepare meals for opposition fighters, cooking rice in a large pot. While a cook tastes the "lemon pumpkin," which is ready to serve, others apportion food into individual meals, loading them in cars to be transferred to the front lines.

Many civilians who had never previously fought in the ranks of the opposition have now taken up arms to face IS fighters, who are closing in. As for those who did not take up weapons, they help provide psychological and logistical support for fighters.

Citizens fear that IS will enter their city, displacing and arresting thousands, including those with no ties to the rebels. Their property and money would be confiscated once they are branded apostates or infidels by IS.

On Aug. 13, IS surprised rebel fighters with a fierce attack in the Aleppo countryside, taking control of the town of Akhtarin, while other villages fell, one after the other. In less than a week, IS had seized control of 13 villages. The rebels realized the seriousness of the situation and fortified their positions once again. 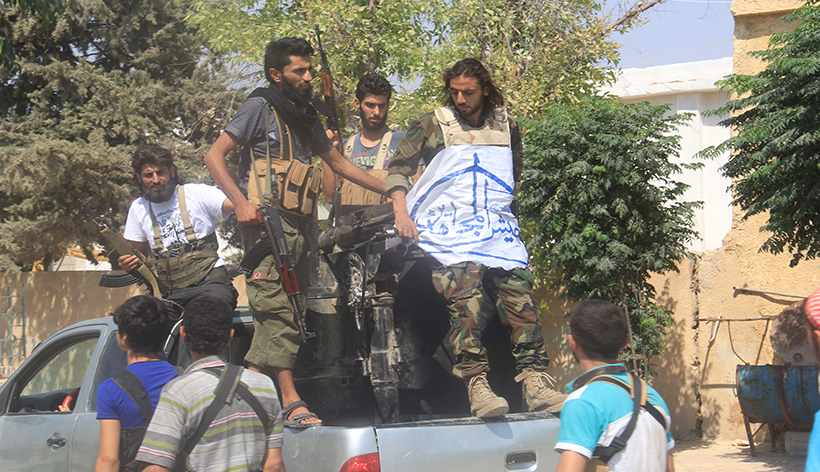 However, the arrival of IS to the outskirts of Marea is a major challenge for the opposition. The city serves as the largest hotbed of opposition fighters and the main stronghold of the Islamic Front. Thus, the city falling into the hands of IS would be an achievement of great value for the extremists.

Marea is the birthplace of Abdul Qader Saleh, the military commander of the al-Tawhid Brigade, who entered the city in July 2012 and managed to control more than 60% of it, as well as many regime military units. However, he died in an airstrike in November 2013.

Near one of the rebel camps, as a leader was dividing soldiers into groups to be deployed to the front, Al-Monitor met Yahya Hafez, also known as Abu Maryam, who is a leader in the Jaish al-Mujahedeen. "The fall of Marea would be a turning point in the history of the Syrian revolution. It would be tantamount to the fall of Qusair in Homs," he said.

Abu Maryam has been fighting the regime with his battalion in the city of Aleppo for about two years. As soon as he learned that IS was progressing toward his city, he rushed to defend it.

He told Al-Monitor, "Marea has significant geographical importance. It is the gate to the rebels’ supply lines from the northern countryside to Aleppo. It is also located near the Bab al-Salam border crossing between Turkey and Aleppo province. We've prepared our military equipment and deployed guards along the demarcation line with IS. We also established an operations room to carry out military operations and push them back from the northern countryside. Soon, we will begin to attack."

Abu Maryam had hardly finished his interview when a warplane roared overhead. A military commander started shouting and ordered the soldiers to deploy. The warplane flew over the city several times before firing a missile, wounding four civilians and destroying houses.

Residents have grown accustomed to the shells on the town fired by IS fighters, who have spread throughout neighboring villages. Although these shells cause less damage than warplanes, they led to the death of a 17-year-old girl on Aug. 15.

The declared goal of IS is to seize control of the northern countryside of Aleppo as revenge for the killing of one of the jihadists’ senior emirs, Haji Bakr, whose wife was also arrested in the Aleppo countryside in January with the beginning of the uprising of the rebels against IS.

The importance of this battle and the seriousness of the situation pushed the rebels to send military reinforcements to counter the threat of IS approaching the northern countryside. The Islamic Front, the Jaish al-Mujahedeen, the Hazem Movement and the Nur al-Din al-Zanki Brigades were among the forces that sent the most reinforcements.

If IS manages to control the northern countryside of Aleppo,the rebels will be trapped, as the regime will control Syria's southwest and IS the northeast.

This will further lead to the closure of the Bab al-Salam border crossing — the last crossing between Turkey and Aleppo — which will tighten the noose around the neck of the rebels, as they will have to rely on only the Bab al-Hawa crossing in Idlib.

"This tumor needs to be removed immediately. They've harmed the image of Islam a lot. We had never been defeated by the regime until they showed up," said an opposition fighter who was stationed with his colleagues in the agricultural fields in Marea.

As he was speaking with Al-Monitor, the voice of an IS fighter was heard through a wireless radio. "We will rain bombs down on you, you infidels. We will burn your skin, you collaborators with America," said the fighter in Modern Standard Arabic. The opposition fighter replied, "If you were men enough, come here. We defeated the regime; defeating you will not be that hard."