Jordan shifts to neutral on Syria

Jordan's decision to stop training Syrian rebels on its soil indicates a shift to neutrality as the kingdom prioritizes its security interests. 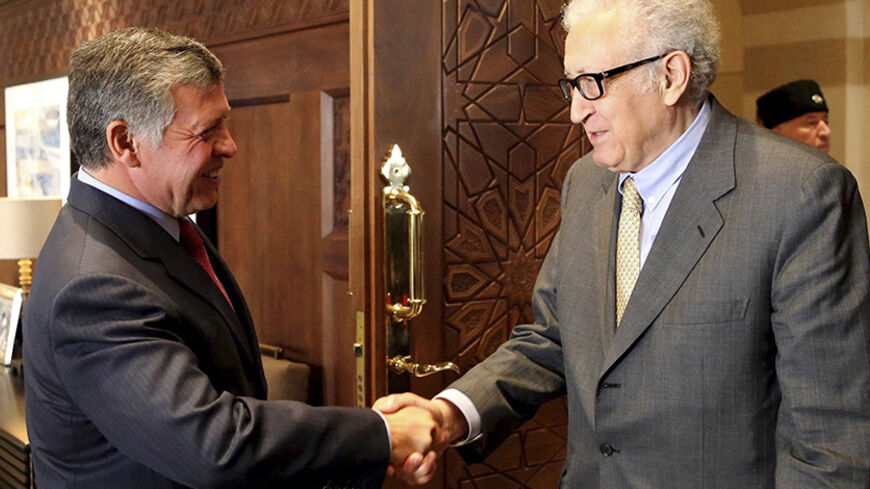 Jordan is realigning its stance on the three-year Syrian crisis in response to recent developments in Syria and Iraq. Last week, Information Minister Mohammad al-Momani announced that Jordan “was not interested in training Syrian opposition forces on its territory” and that its “public policy has always been not to interfere in Syrian affairs.” He told Asharq Al-Awsat newspaper that Jordan had never trained opponents of the Syrian regime and that it continues to support a political solution that will bring stability to Syria and decrease the effects of refugees, who present a great pressure on the kingdom’s resources and infrastructure.

Momani was reacting to press reports that US officials had confirmed that “Jordan was reluctant to host an expanded rebel instruction program” proposed by President Barack Obama, who had requested from Congress $500 million to finance it. After months of delays, Obama had decided to provide training and weapons to the moderate opposition and in June, national security adviser Susan Rice acknowledged that the Pentagon was aiding Syrian rebels with “lethal and non-lethal support.”

But Momani said that Jordan had not received an official US request to host the training program or receive additional American troops. Reports say there are 1,500 US troops in Jordan and Patriot surface-to-air missiles are stationed along the borders with Syria.

But a number of Jordanian analysts believe that the United States' ramping up support for the moderate opposition is too late and comes in the midst of changing geopolitical conditions in the region. Political commentator Fahd al-Kheitan told Al-Monitor that Jordan no longer shares the US view that the Syrian opposition can present an alternative to President Bashar al-Assad's regime.

He said that time has confirmed that the Syrian opposition is divided and controlled by regional powers, while most fighters on the ground are leaning heavily toward radical forces and jihadists. He added that the Syrian crisis is no longer a priority for the so-called Friends of Syria group, in light of recent developments in Egypt and Iraq and the rise of the Islamic State (IS, formerly known as the Islamic State of Iraq and al-Sham, or ISIS).

“Now that political and military efforts have failed to resolve the Syrian issue, Jordan is focused on dealing with the humanitarian effect of the crisis in addition to managing potential regional threats that could reflect on its national security,” Kheitan said.

In spite of Momani’s denial that Jordan was never involved in training of Free Syrian Army (FSA) elements, press reports confirmed that the kingdom was involved in covert operations led by the CIA and other Western countries to provide training and facilitate the passage of weapons into Syria. The Syrian regime had repeatedly accused the Jordanian government of working with the Americans and the Saudis to destabilize Syria. Jordan has always rejected such claims.

Relations between Jordan and Syria have fluctuated since the outbreak of the Syrian uprising. Initially, King Abdullah II had called on the Syrian president to step down. But official Jordanian sources told Al-Monitor that in spite of poor relations — Jordan expelled the Syrian ambassador earlier this year — security agencies in both countries continue to coordinate.

The recent setbacks suffered by the FSA and other rebel groups while IS and the regime have made important gains on the ground have forced Jordan to re-examine its policy on Syria. One former minister, requesting anonymity, told Al-Monitor that Jordan no longer believes Assad can be defeated or replaced. He said that the re-election of Assad, the IS factor and its breathtaking victories in Iraq have changed the rules of the game.

Another reason for Jordan to be wary is the obvious failure of the Obama administration to handle regional crises not only in Syria but in Iraq and Egypt, along with its controversial rapprochement with Iran. Former Chief of the Royal Court Adnan Abu Odeh told Al-Monitor that Jordan is now neutral on the Syrian issue and is concentrating on humanitarian efforts while protecting its borders. He said that if Jordan was involved in covert operations in the past, that chapter is now closed because of worries about Syria’s territorial integrity.

Political Affairs Minister Khaled al-Kalaldeh told Al-Monitor that he has serious doubts about the ability of the Obama administration to provide lethal weapons to the opposition. He said that he is skeptical about Congress approving the Obama proposal, adding that Jordan prefers to stand down and stay out of such plans, which will force it to challenge the Damascus regime directly.

But Salameh Darawi, editor of Maqar, said that the Jordanian position will likely change again under US and Saudi pressure. He told Al-Monitor that the two countries believe Jordan’s role in hosting the training program is crucial and that Amman will be pressured financially to come around. But he acknowledged that the kingdom’s priority now is security related and not economic.

The July 11 murder of a leading FSA officer in Amman has added to Jordan’s worries. Maher al-Rahal was killed in what Jordanian police described as a criminal, not political, incident. But a spokesman for the FSA said Rahal’s killing was an assassination. With more than 1.2 million Syrians living in Jordan, the specter of the Syrian regime liquidating opponents there through sleeper cells or infiltrators has prompted local observers to urge the government to stay away from the Syrian quagmire.