For years, Hamas has constructed an ''underground Gaza'' designed to fire rockets at Israel, send infiltrators and protect Hamas' leadership, while investing nothing in the welfare of "upper Gaza." 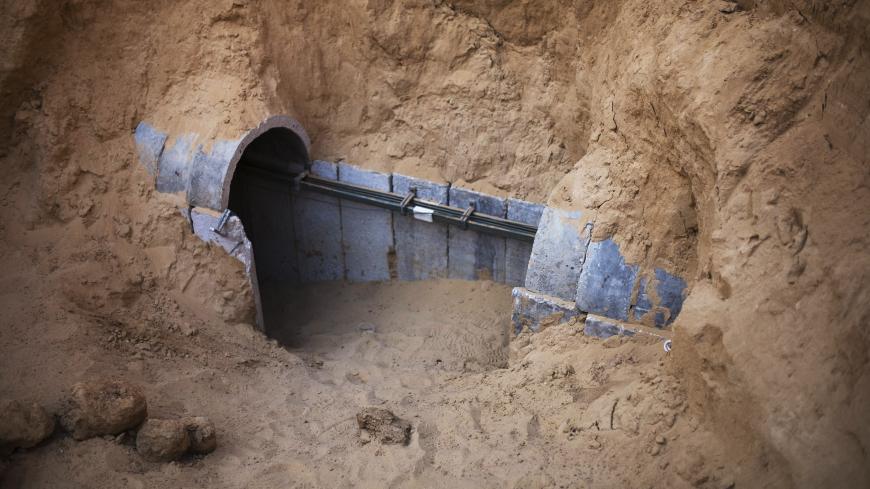 The entrance to a tunnel exposed by the Israeli military is seen on the Israeli side of the Israel-Gaza border, March 27, 2014. The IDF announced that the tunnel had been exposed on March 21, 2014. - REUTERS/Amir Cohen

The ground phase of Operation Protective Edge raises many questions that will require answers once the campaign is over. Was Israel aware of the extent and scope of the Hamas terrorist tunnel project? Was the Israeli military establishment aware of it, and if so, did it provide Israel’s decision-makers with a comprehensive — or even a near comprehensive — account of the dozens of high-quality tunnels being excavated between the Gaza Strip and Israel, which would be put into use once the order arrived? Did the Israeli political echelon know about these tunnels? Were they silent about them? Were they showing restraint? And if so, why?

On the eve of its incursion into the Gaza Strip, Israel agreed to an Egyptian outline for a cease-fire to restore calm. It was only after 13 militants from the Izz ad-Din al-Qassam Brigades penetrated Israel in an attempt to launch a terrorist attack in Kerem Shalom that the Israel Defense Forces (IDF) got the green light to begin a ground assault. And it was only then that soldiers discovered there was an underground Gaza just like there was an aboveground Gaza, and that the Hamas movement had invested an enormous amount of resources into constructing that underground Gaza.

Prime Minister Benjamin Netanyahu was very wary of defining his precise objectives to end Operation Protective Edge. Instead, both he and his government are making do with more general goals, such as “removing the rocket threat” and ''restoring quiet to the citizens of Israel.” It was only following the failed infiltration operation and during the UN-sponsored five-hour humanitarian cease-fire that it became clear how pressing and urgent the tunnel threat really was, and that it could pose an even greater threat to Israel than Hamas’ rockets.

No Iron Dome air defense system has been found as of yet to counter these terrorist tunnels. Furthermore, in the race against time, there can be no doubt that Hamas managed to get a step ahead of Israeli preparedness. In a background briefing for journalists, an IDF source stated on July 19 that it is questionable whether the army will be able to locate all of the tunnels. This only testifies to the degree that the IDF was surprised by the scope and size of the assault tunnels that Hamas created along the border with Israel.

It was suddenly revealed that there are two Gazas: One is the crowded, impoverished and faltering Gaza, but there is also an “underground Gaza,” buried deep below the surface. As of now, the IDF has located 36 tunnels, but even during the current fighting, with the IDF still searching the area, terrorists have been sent to launch attacks deep in Israeli territory through tunnels that have yet to be discovered. According to the security source’s assessment, these are enormous tunnels, the planning and preparation of which probably lasted approximately three years. The cost of excavating, reinforcing and maintaining each tunnel is approximately $1 million, and as far as is now known, dozens of such quality tunnels were dug along the border between Israel and the Gaza Strip, from the northernmost part of the territory all the way to the south.

The Israeli exit of these tunnels is sometimes as far as half a kilometer beyond the Green Line. Over the years, once the tunnels were completed, they all required routine maintenance to ensure that they remained operational and hidden. It was even necessary to protect them from flooding during winter storms, a problem exacerbated by Gaza’s broken and collapsing drainage and runoff system. One can only wonder why Hamas — a movement that advocated the improvement of life quality for Gaza residents and offered them “change and reform” — did not even invest as little as one-hundredth of the cost of the tunnels to renovate Gaza’s sewage system. Instead, it invested in building more tunnels and rockets.

The Hamas movement has developed three distinct types of tunnels:

The first consists of the many hundreds of tunnels along the border between Gaza and Egypt, most of which were sealed recently by Abdel Fattah al-Sisi’s new regime. These are "economic tunnels." They are designed to bring merchandise and raw materials into Gaza from Egypt. Over the years, and especially after Israel’s withdrawal from the Philadelphi Corridor (the route running along Gaza’s border with Egypt), these tunnels served as an “underground railroad” of sorts to bring in weapons, including the vast stockpile of rockets that have accumulated in Gaza.

The second network of tunnels is complex and has multiple branches running off it. This network, which was burrowed beneath the cities and refugee camps of Gaza — Khan Yunis, Rafah, Jabaliya, and Shatti — was designed to hide the stockpile of rockets and launchers. At the same time, other tunnels were dug to provide protection to Hamas leaders and allow them mobility. Every single leader of Hamas, from its lowest ranking bureaucrats to its most senior leaders, is intimately familiar with the route to the security tunnel assigned to him and his family. The most senior leadership has its own specific tunnel, which serves as a “war room” in times of emergency, such as the current military campaign in the Gaza Strip.

Then there are the tunnels along the border with Israel. These were intended to allow Hamas activists from the Gaza Strip to infiltrate deep into Israeli territory. Israel had already established a security fence along its border with Gaza, which has successfully prevented countless terrorist infiltrations and attacks. So the border tunnels were dug beneath the fence.

Much to the misfortune of the people of Gaza, Hamas has invested far more resources in “underground Gaza” than in “upper Gaza.” The border tunnels and the defensive tunnels intended to ensure the safety of the Hamas command cadre proved that the movement’s priorities were flawed. The movement was founded as a welfare organization, intended to provide for the needy of Gaza, but instead it invested its resources in its own needs, at the expense of the population. Anyone who voted for Hamas in the 2006 elections as a way of protesting Fatah’s corruption received a very different kind of corruption instead. The “change and reform” that Hamas offered its voters was invested in its tunnels at the expense of the people of Gaza.

But the tunnels extending into Israeli territory reveal another old-new aspect of Hamas’ behavior and methodology. The motif of shahada, or “martyrdom,” in the person of suicide bombers, has once again taken over the movement. During the second intifada, Hamas used all its force and means to encourage suicide attacks against Israel. To do this, it issued fatwas (religious rulings) that made recruiting of suicide bombers and sending them on missions to kill Israeli civilians the fulfillment of God’s will. “Martyrdom” became a central motif in Hamas. It was so successful, in fact, that the movement’s leaders boasted that the demand for martyrdom exceeded available opportunities. Hamas was able to recruit “martyrs” to conduct suicide attacks in Israel at any given moment. It even produced a fatwa allowing it to recruit women to die as martyrs.

The entire Hamas system worked to promote and advance the theme of martyrdom. It emerged as its greatest weapon and, unfortunately, the most effective and destructive weapon that the movement had, too. Preachers in mosques used their sermons to speak about the importance of martyrdom (fi sabil Allah, “in accordance with Allah’s will”), until many people throughout the West Bank and Gaza sincerely believed that Allah wanted to be sanctified through the sacrifice of believers’ lives, and that only through martyrdom could they prove their loyalty and their faith. At the same time, the movement’s welfare system promised material enticements to the martyrs’ families, providing them with money and aid. Both were especially valuable during the intifada, because the economy had collapsed. Encouraged by Hamas, the motif of suicide was transformed into a heroic act of sacrifice for the sake of the entire Palestinian people and its liberation.

It was only after Israel assassinated the movement’s senior political leadership, starting with its founder Ahmed Yassin in March 2004 and followed by Abdel Aziz Rantisi the following month, that there was a dramatic change in Hamas. The encouragement of shahada all but disappeared from the Hamas lexicon, and the rocket was sanctified instead. Ten years later, Hamas has returned to its ill roots.

The tunnels along the border with Israel are more than just an extensive engineering project that consumed considerable resources. It is a project that requires the training of hundreds of armed Izz ad-Din al-Qassam Brigades' militants to engage in face-to-face combat in Israeli territory, though the chances of returning alive from it are slim. According to the teachings of Hamas, Ash-shahada fi sabil Allah, “Death upon the order of Allah to sanctify His name,” has become the combat doctrine used to train the movement’s most elite units.

Hamas operated beneath Israel’s radar when it embarked on its extensive project to dug these tunnels, but at the same time, it also had to prepare its people for what these tunnels meant. Without preparing a cadre of martyrs, who agree to sacrifice their lives for the sake of jihad with Israel, the vast network of tunnels is neither effective nor efficient. Indoctrinating hundreds of volunteers with the idea of martyrdom requires no less a long and exhaustive investment as building a tunnel. Operation Protective Edge not only uncovered the terrorist tunnels but also the terrorists who Hamas has been training over the years to operate through its network of tunnels.

The main question that remains is whether the theme of martyrdom will also be adopted anew by the organization’s infrastructure in the West Bank. Will the Hamas leadership encourage the military wing in the West Bank to renew its terrorist attacks against Israel, like it did during the second intifada? There can be no doubt that this time, with Palestinian President Mahmoud Abbas at the helm of the Palestinian Authority instead of Yasser Arafat, and given the effectiveness of the Palestinian security forces, it will be more difficult to send suicide bombers through the security fence to launch attacks against Israel. Yet, though it will be more difficult, it will not be impossible.

There are still many other questions that have yet to be answered. For example, what is the role of the Palestinian media covering the military operation in Gaza? Is it capable of swaying Palestinian public opinion to oppose the corruption of Hamas and the movement’s warped priorities, which include sacrificing the people of Gaza to achieve the movement’s objectives?

As would only be expected, the Palestinian media highlights the killing of Palestinian civilians in the Gaza Strip and the horrible suffering imposed on the residents. And justifiably so. Nevertheless, it is still disappointing that not a single Palestinian journalist has thought to ask one particular question that is critical of the Hamas regime: How is it that Hamas, which seized control of Gaza in a military coup and invested all its resources in creating “underground Gaza,” could leave the people of Gaza aboveground so indigent and exposed?