Egypt distances itself from Gaza war

Egypt is not playing an active role to mediate a cease-fire, as it has done in previous confrontations between Israel and Hamas, suggesting that it might prefer Israel delivering a blow to Hamas. 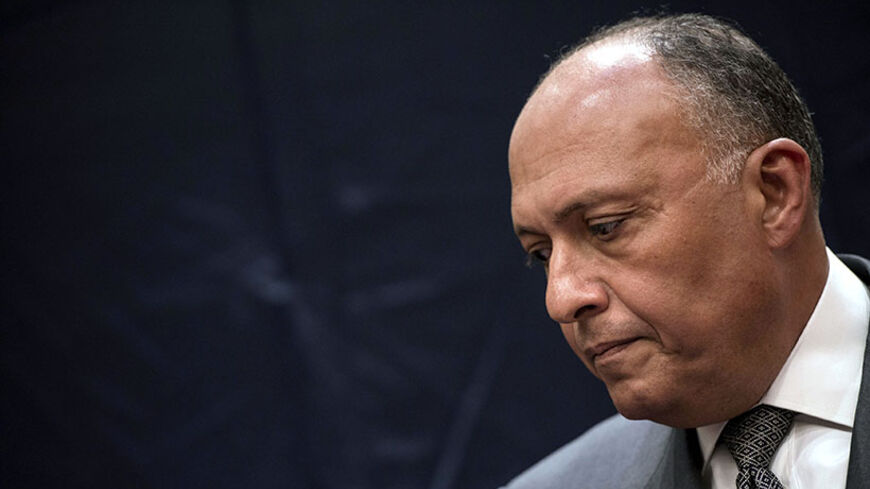 Communications between Hamas and Egypt failed to prevent another Israeli assault on the Gaza Strip, with the launch of Operation Protective Edge on July 8, according to what Al-Monitor learned from well-informed sources in Gaza and Cairo.

On July 5, and prior to the current escalation, Egypt’s Foreign Minister Sameh Shoukry declared that his country is making efforts to calm the situation between Palestinians and Israel.

For his part, Osama Hamdan, head of Hamas’ international relations department, stressed on July 4, that he would not accept any truce without lifting the blockade of the Gaza Strip, denying the existence of any genuine effort in this direction and stressing that Egypt did not interfere to achieve this truce.

Al-Monitor learned from well-informed Palestinian and Egyptian sources that on July 4 Egyptian intelligence asked Ramadan Shalah, head of the Palestinian Islamic Jihad, to communicate with Hamas to extend the truce that was concluded after the 2012 war. However, he refused to play the role of the mediator between Egypt and Hamas since he is in the same trench with Hamas, a situation that angered Egypt and made it no longer interested in upholding its efforts for the truce. It should be noted that communications between Egypt and Hamas have been almost severed following the ousting of President Mohammed Morsi last year.

Prior to Israel’s attack on Gaza at dawn on July 8, Al Jazeera Mubasher Misr channel reported that Maj. Gen. Mohammed Farid al-Tohamy, the director of Egypt’s General Intelligence Service, had visited Tel Aviv hours before the attack and met with Israeli security officers. It also reported that Egyptian President Abdel Fattah al-Sisi had given Israel initial approval to launch a military operation on Gaza to destroy Hamas.

In an interview with Al-Monitor, a Hamas official in Gaza refused to confirm or deny the news. “To prove these leaks wrong, Egypt must make serious efforts and put pressure on Israel to stop the attack on Gaza that has been going on for three consecutive days. The distance between Gaza and Egypt’s eastern border does not exceed 6 kilometers [3.7 miles] and Egyptian soldiers can hear and see the Israeli bombardment.”

“It is surprising that the Israeli aggression on the Gaza Strip coincided with the closure of the Rafah crossing, which prevented the entry of medical aid and the travel of the injured for treatment. We are waiting for Egypt to take a national stance to prevent further Palestinian bloodshed and put an end to Israel’s flagrant violations in Gaza,” he said.

Later on July 10, Egypt announced that it will reopen the Rafah crossing to bring in the injured from the Gaza Strip and send medical aid.

During his speech on the anniversary of the Yom Kippur War in October 1973, on the evening of July 7, Sisi notably did not express his objection to the Israeli aggression on the Gaza Strip.

Egypt’s move to put an end to the current war on Gaza was limited to the pledge made by Sisi to Palestinian President Mahmoud Abbas, who called the Egyptian president on July 8.

This prompted Wahid Abdel Meguid, a professor of political science in Cairo, to tell Egypt’s Al-Watan newspaper that the stance of Egypt on Gaza is negligent, as Egyptians ought to completely denounce the attacks and not conduct mere mediations between Hamas and Israel. This reflects Egypt’s concern about the internal political conflict with the Muslim Brotherhood.

On July 9, Khaled Meshaal, head of Hamas’ political bureau, said in his speech on the war on Gaza that he has received dozens of calls demanding a truce with Israel, but he rejected them all since Israel was the one to start the aggression. It was clear that he did not mention Egypt, which further indicates the strained relations between both sides.

However, the most significant development in the ongoing war on Gaza is the announcement by Izz ad-Din al-Qassam Brigades on July 8 of its military operation against Israel, “Operation Tenth of Ramadan,” which it dedicated to the martyrs of the Egyptian army who perished in the war of October 1973.

A foreign-based Hamas media official told Al-Monitor that this label was aimed at “eliminating the propaganda of the Egyptian media,” which has incited the Egyptian people against Hamas, in a move to stress the depth of relations with the Palestinian people.

Al-Monitor contacted by phone a former member of the Egyptian People’s Assembly, who spoke on the condition of anonymity. “Egypt may not seem to be in a rush to end the Israeli aggression on Gaza, because Egypt’s foreign policy is associated with its domestic policies. It is clear that Sisi considers Hamas to be an extension of the Muslim Brotherhood in Egypt. Thus, we do not expect him to shed a lot of tears if Israel dealt Hamas a severe blow,” he said.

The Arab Center for Research and Policy Studies, managed by Arab thinker Azmi Bishara, made a similar statement on July 10, saying that “Egypt is currently not enthusiastic to play the role of mediator between Hamas and Israel, as it shares the same interest with Tel Aviv, which is to make Hamas and Gaza pay a dear price.”

New developments took place in the last hours as reported by London-based newspaper Al-Arabi al-Jadeed, about communications at the Arab and international levels to reach a truce in Gaza. There have been telephone calls between UN Secretary-General Ban Ki-moon, Emir of Qatar Sheikh Tamim bin Hamad bin Khalifa Al Thani, US Secretary of State John Kerry and his Qatari counterpart Khalid al-Attiyah, as Egypt refrained from intervening to mediate a cease-fire, leaving Israel to deal a severe blow to Hamas.

However, a Palestinian official in the Gaza Strip, who has been mediating to ease the tension between Egypt and Hamas, told Al-Monitor that “parties other than Egypt — Qatar and Turkey in particular — have interfered to stop the Israeli aggression. However, Egypt will not let the Palestinian issue slip from its hand, and it is likely to start serious contacts with Hamas and Israel, once it knows that other countries are making serious efforts in this direction.”

The Israeli war on Gaza has entered its third day, while communications between Hamas and Egypt continue to be at a low point, a well-informed source in Hamas told Al-Monitor. He said, “Cairo is offering a truce for a truce, while Hamas rejected this deal. We have refused this deal because of the heavy bloodshed in recent days and will not renege on our stance. These sacrifices will not be in vain and our demands to our Egyptian brothers are clear.”