A first-hand account of the Israeli airstrike that killed Hamid Shehab, the driver of a media vehicle. 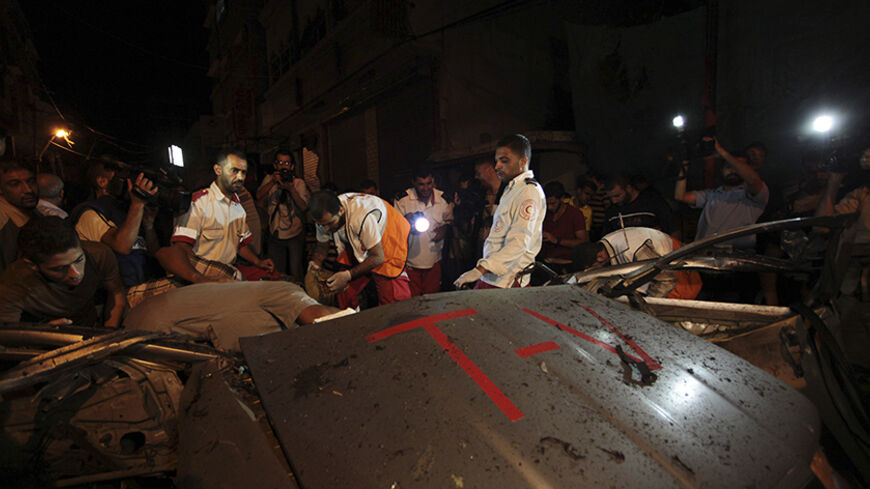 Palestinian medics inspect the remains of a press vehicle driven by Hamid Shehab, who was killed in the Israeli airstrike that destroyed the car in Gaza City, July 9, 2014. - REUTERS/Ashraf Amrah

GAZA CITY, Gaza Strip — Since the start of the Israeli aggression on Gaza on the morning of July 8, I have been working from the headquarters of Media24, a local news agency, in Burj al-Ghafari, in western Gaza City. It provides electricity, cars and logistical equipment to ensure that nothing delays my writing and sending of reports.

In the mornings, I go to areas that have been targeted to conduct interviews, and then I return to the office, where I am confident that such services as electricity and Internet access will be available. The office driver, Hamid Shehab, prepares us coffee in the evening and distributes the cups in silence, but also with a friendliness.

Rarely do we go home to rest, because news is rapidly streaming in as events unfold and pressure grows, with increasing numbers of martyrs and injured. We stay at the office until the early hours of the morning and eat suhoor, the predawn meal during Ramadan before daytime fasting begins. On the first day of the aggression, Hamid had stayed up late with us, and we ate suhoor together. On the second day, July 9, Hamid was driving photographers and journalists from the agency to hospitals and homes that had been hit by rockets and then bringing them back to the office. Quietly and without complaint, he handled the pressure and difficulty of the work under the circumstances.

On that day, we had finished following up on stories and interviews, and everyone had returned to the office. We were all busy with something — a photo essay, report or interview — and Hamid was with us, helping and reassuring everyone. Sunset was approaching, and we began to prepare for iftar, the main meal during Ramadan. Hamid ate with us and then made Arabic coffee as usual and distributed it.

We could not understand. We thought, "Maybe Hatim was mistaken." We hoped so. The director of the agency, Khaled al-Ashqar, hurried to the hospital and confirmed the news: Our friendly driver had been killed by a direct hit on the silver Skoda with "TV" written on the side in large, bright red letters.

Hatim told Al-Monitor, "He took me home, like he did for the rest of the crew. He told me at the time that he would be back in about an hour to pick me up in front of my house to finish taking photos. He said he would bring mattresses, blankets and pillows so that everyone could sleep in the office in order to follow up on events directly and given the risk of going out at dawn.

"Hamid later called and said he would be at my house in the Ramal neighborhood in a few minutes. I went out onto the front stairs and heard a violent explosion. I ran back to my family, thinking that the rocket had hit my home. However, I saw that they were fine. I looked out the window and saw that Hamid's car had been destroyed by the rocket. The only thing that remained was the press sign on the front of the car."

According to Hatim, the Ramal neighborhood is known to be a quiet place and is rarely targeted for bombings. There are no nearby military targets. He said that among those injured in the strike were four of his cousins, as well as worshippers exiting a nearby mosque.

He told Al-Monitor, "Twenty people were wounded in the strike, including some of my relatives. I saw the mattresses and pillows that Hamid had promised to bring. The citizens were removing them from the car and collecting his body parts."

Ashqar told Al-Monitor, "The occupation does not differentiate in its crimes between citizens and journalists. However, the targeting of a car that has a clear press sign on it is considered a war crime. This is an attempt to terrify journalists to keep them from continuing with their work to expose the occupation's crimes." He stressed that those at his agency, like other journalists, would continue with their work. They would not be scared off.

The Euro-Mid Observer for Human Rights, based in Geneva, condemned the targeting of the agency's car and killing of Hamid Shehab at the age of 30. They stressed that what the Israeli forces were doing — targeting civilians and deliberately shelling houses and public and private property — had reached the level of a war crime.

At dawn on July 10, only a few hours after the death of our colleague, things seemed different. Fear had increased among the agency's crew, and we felt that Israel was deliberately targeting journalists. There is still a need growing among us and within us, however, to continue to cover and follow up on events, reveal facts and write reports — not just numbers, but people's stories. These are tales of pain and torment, of children who have lost their families and others who disappeared under the ruins of their homes. Tales of the loss of a colleague who bid farewell to us before he was taken by death.

Sleep has become a strange creature. We resist it just like we resist fear. The bombing has become more terrifying and intense than during the first day of the attacks. Home has become a far-off dream, although my house is only a five-minute drive from the office. Those at home insist, "Don't go out. We don't want another loss." I remain silent. I miss my son and my daughter, but I must write and tell these stories. For we are stories, not just numbers.