Hamas officials have scolded President Mahmoud Abbas for attending a peace conference in Tel Aviv during Israel's assault on Gaza. 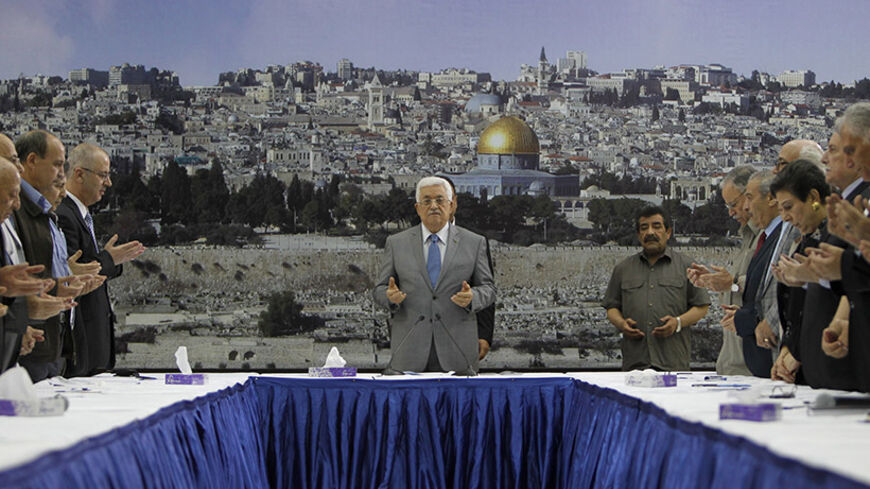 Israel’s attack on Gaza was expected to turn a page in the conflict that erupted recently between Fatah and Hamas, including the salary crisis, which almost wrecked the reconciliation between them.

But the current Israeli war on Gaza has fed the flames between Fatah and Hamas. At the height of the Israeli bombardment of Gaza early July 8, Palestinian Authority President Mahmoud Abbas surprised the Palestinians by giving a speech at a peace conference organized by the Israeli newspaper Haaretz. In attendance were a large number of Israeli and international peace activists, journalists and economists.

Abbas’ participation in the conference came despite a boycott by chief Palestinian negotiator Saeb Erekat and businessman Munib al-Masri over the bloody situation in Gaza and out of respect for its people.

A senior Fatah official in Ramallah revealed to Al-Monitor that some Fatah leaders “asked Abbas not to participate in the Israeli conference because the people might interpret it as a lack of concern in the continued massacre in the Gaza Strip. When he insisted on participating, we asked him to talk about what is happening in Gaza and to ask the international figures participating in the conference to intervene with the Israeli government to stop the attack, but he didn’t do that.”

Hamas​ also criticized Abbas’ participation in the conference as it coincided with the Israeli war on Gaza. In an interview with Al-Monitor, Hamas spokesman Sami Abu Zuhri asked Abbas to “not participate in the conference because it offends the feelings of the Palestinian people and gives Israel an opportunity to improve its image after … its heinous crimes.”

Abbas' recorded speech, which was broadcast to participants in the conference in Tel Aviv, added to Hamas’ indignation.

A Hamas official abroad listened to the speech and, in an interview with Al-Monitor, said he regretted that “the speech didn’t contain a single reference to the Israeli aggression taking place in Gaza, didn’t mention the scenes of children’s [remains] and didn’t use the opportunity of the presence of major Israeli and international figures at the conference to threaten to go to more international organizations to confront Israel and deter its aggression on Gaza, Jerusalem and the West Bank.

“Abbas’ speech increased his isolation from the Palestinians. He wanted to be away from his people even though the Gaza war presented him with a golden opportunity to restore unity with Hamas and overcome the recent crises that followed the reconciliation. But he wanted to win over world public opinion at the expense of his popular support among the Palestinians,” he added.

Hamas official Yahya Moussa, chairman of the Oversight Committee in the Palestinian Legislative Council, was harsher. On July 9, he asked Abbas in a Facebook status “to quickly come to Gaza, apologize to its people, submit his resignation and hand over the leadership to the resistance because it is the sole legitimate representative of the Palestinian people. If he does that he would wash away his shame and atone for the sins of his siege of Gaza, his harassment of the resistance and his security coordination with Israel.”

Hamas spokesman Husam Badran called on the Fatah leadership to distance itself from the political and security approach adopted by the PA president in the West Bank. He said, “This may be Fatah’s last chance to correct its position by joining the choice of our people, a choice that is based on the resistance project.”

A Palestinian official in Ramallah, however, rejected Hamas’ criticism of Abbas. In a telephone interview with Al-Monitor, he said, “The president is not obliged to take propaganda positions that play on the citizens’ feelings but that produce no political achievements to stop the Israeli war machine in Gaza … [Abbas] will go to all international organizations to stop the aggression on Gaza. He has been in contact with regional and international parties in the past few days in an effort to continue the truce and stop the military escalation.”

Abbas gave a televised speech on the evening of July 9, in which he called for an end to the aggression on Gaza and for the unity government to provide for the humanitarian needs of the people of Gaza.

Hamas’ political bureau head Khaled Meshaal made a surprise phone call to Abbas on the evening of July 6, just hours before the Israeli war on Gaza started. They discussed the latest developments in the Palestinian territory in light of the continued Israeli escalation.

Al-Monitor has learned from Hamas circles that they did not widely welcome Meshaal’s phone call to Abbas, as they “wish to keep [Abbas] isolated after his negative position toward the Hebron operation, his considering that security coordination with Israel is sacred and because he waited a while before taking a national position regarding the Israeli aggression on Gaza.”

Interestingly, Abbas’ position toward the Gaza war was met by an angry response by not only Hamas, but also by former Minister Hassan Asfour, a close associate of former Fatah strongman Mohammed Dahlan, Abbas’ arch rival. Asfour wrote in an article on the Amad website, which he owns, that Abbas’ position toward the Israeli escalation in Gaza is a total political scandal and compared it to Brazil’s defeat against Germany on its home soil during the World Cup. Asfour wrote that Abbas didn’t react or take a position when Israel launched its war against Gaza and didn’t even change his daily schedule.

Hamas also slammed the coverage of the Gaza war by PA-affiliated outlets. A Hamas media official who spoke on condition of anonymity told Al-Monitor, “The coverage of the war on Gaza by the Abbas-affiliated Palestine Radio and TV Corporation was feeble, causing many Palestinians to accuse the corporation of being biased toward Israel. There were extensive campaigns to boycott [the media outlet] because while the killing was taking place in Gaza, it kept broadcasting its programs about singing, dancing, food and contests. This was poor behavior and [disrespects] the blood being shed in Gaza. Shame on [the outlet’s] administration, council and those who manage it. They must be held accountable.”

The two previous wars in Gaza, in 2008 and 2012, negatively affected the already strained relationship between Hamas and Fatah. Yet those wars happened in the midst of Palestinian division. The current war of 2014 is happening just a short while after the reconciliation. Will this war strengthen the national consensus or widen the rift?