The international soccer federation has not sanctioned Israel for its violations against Palestinian soccer, instead giving a committee until December to monitor developments. 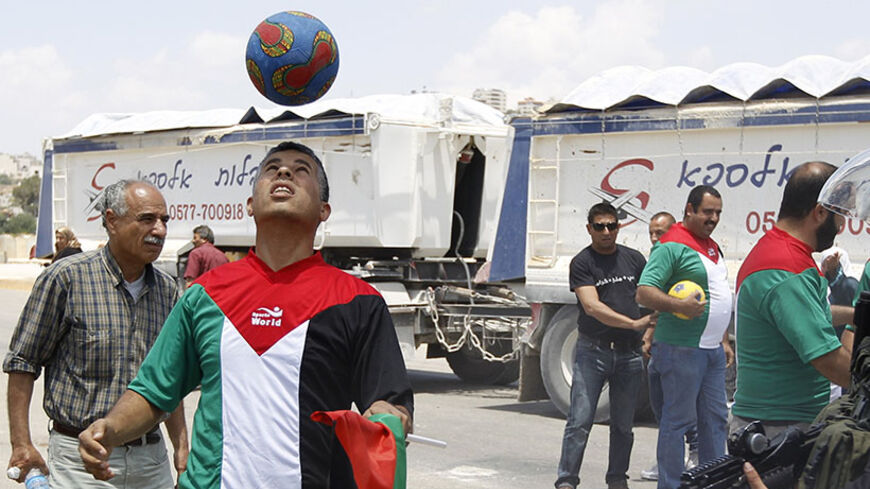 A Palestinian protester heads a soccer ball next to Israeli border police during a demonstration near Ramallah in solidarity with hunger-striking Palestinian prisoners, June 11, 2014. - REUTERS/Mohamad Torokman

GAZA CITY, Gaza Strip — The FIFA Congress decided on June 11 to form a neutral committee to monitor Israeli violations against Palestinian sports, but fell short of punishing Israel. The committee will submit its report in a meeting in Morocco in December. Despite expectations, it didn’t turn out to be the day to punish Israel for violations against Palestinian soccer and other sports, FIFA regulations and the Olympic Charter.

Maj. Gen. Jibril Rajoub, the head of the Palestinian Football Federation, did not abide by his promise in mid-May not to hesitate to ask the FIFA Congress, which will meet in Sao Paulo this month on the sidelines of the World Cup in Brazil, to vote on expelling Israel from the organization.

Ibrahim Abu Salim, the deputy head of the Palestinian Football Federation, told Al-Monitor in a phone conversation from Sao Paulo in the early hours of June 12, “I want to be frank. Unfortunately, the general atmosphere didn’t help the Palestinian delegation to introduce a resolution expelling Israel or freezing its membership to vote. … The delegations that were supposed to support Palestine in case the issue of expelling Israel was raised — such as some Arab, Islamic and friendly delegations — advised us to not put forward that request now for fear that the vote will fail. The vote requires 75% of the participating countries and if it happens now, the request may fail rather than be postponed until next year.”

He stressed the importance of including on FIFA’s agenda Israel’s violations against Palestinian sports and repeated the condemnation by FIFA's president Joseph Blatter of Israeli practices in his last speech to the FIFA Congress.

Blatter said in his June 11 speech, “The problems between Israel and Palestine have been going on for more than 50 years and it would not be possible for us to solve them in one year … but we have made positive first steps.”

Mohammed al-Amssi, the assistant secretary-general of the Palestinian Football Federation, met with Al-Monitor at the headquarters of the Olympic Committee. He explained the steps adopted by FIFA and said that the constant Israeli actions against Palestinian sports since 1994 have resulted in the issue of Israeli violations against Palestinian soccer to be added to the Palestinian agenda during the FIFA Congress meeting held in Mauritius on May 30. Accordingly, Blatter was given a mandate by member states to pursue the matter. But since then, Israel has not stopped the violations, returning the issue to the congress’ agenda.

FIFA’s decision has dampened the hopes of Palestinian athletes about this issue before the World Cup. At the Gaza Sports Club where newcomers train, Palestinian soccer player Anas Yasser al-Helou said, “I feel injustice and frustration. I am spending the best days of my youth and professionalism, which I’m supposed to spend playing with the team, to train others.”

Helou, who Al-Monitor met a few hours before the congress’ decision, said, “I hope to find a solution so that we can travel through Beit Hanoun [Erez],” adding that Israel had not given him permission to participate in three tournaments, most recently the Asia Challenge Cup in the Maldives, where Palestine won for the first time.

Helou, who turns 24 in a few days, lamented, “I was watching the last game in the Challenge Cup with the crowd in the port yard, imagining that my fans in Gaza were watching me on television as I achieved victory for the team.”

Helou cannot travel through the Rafah crossing to participate in the games. He must first join the Palestine team’s training camp in the West Bank for two weeks before traveling from there.

Supporting Helou's statement, the Palestinian team's assistant coach Saeb Jundiyya told Al-Monitor during a meeting at the headquarters of the Olympic Committee, “Gaza players have been unable to reach the team’s training camp in the West Bank for a long time. Four players were supposed to be part of the team in the West Asian Championship in Qatar and the Challenge Cup in the Maldives, but they could not.”

He added that the same ban applies to the Olympic soccer team and the beach soccer team, which holds the bronze medal in Asia and was unable to join the championship last May because Israel refused to issue permits. “The players’ morale is devastated. Obstacles to travel are placed on sports in Palestine in general. But it is twice as bad on sports in the Gaza Strip.”

Sports writer Ashraf Matar, who met with Al-Monitor before the FIFA Congress meeting, said that the European and Asian soccer confederations and the Arab group are pressuring Israel tp stop its violations against Palestinian sports.

“Any decision that will be made by the congress would not stop the suffering of Palestinian sports, but only alleviate it,” said Matar. He discounted the possibility that Israel’s FIFA membership would be frozen because of the power of the Israeli lobby, despite the lack of a veto on decisions made by the congress.

Issued in 2013, the booklet chronicling violations by the Israeli occupation against the Palestinian Football Federation is filled with hundreds of cases from the last five years. The violations are divided into several categories: blocking infrastructure projects and the bombing and destruction of more than 14 clubs and playing fields in the Gaza Strip and the West Bank; imposing restrictions on the movement of athletes between Gaza and the West Bank; preventing travel outside the West Bank and Gaza for players, managers, coaches and referees; and preventing the entry of foreign guests and international sports teams.

The booklet included violations by customs procedures that prevent the entry of sports equipment, such as aid or donations; human rights violations, including the deaths of six athletes in Israeli bombardment; and the arrest of dozens, of whom the best known is Mahmoud al-Sarsak. He completed a 90-day hunger strike before being released in July 2012.

Amssi said that the booklet issued by the Palestinian federation did not include violations from 2014, which include the arrest of player Sameh Maraiba in April when he returned from Qatar through the Karama crossing and the firing of dozens of bullets at the feet of players Adam and Jawhar Halabiyya in January as they returned from a training session at the Faisal Al-Husseini stadium, preventing them from playing soccer again due to injuries sustained.

Amssi, prevented three times from obtaining a permit, most recently to travel to the FIFA Congress meeting in Brazil, said, “It is Palestine’s right to play sports as a state with full membership. It is an acquired right through a journey of sport and political struggle going on for years. Any FIFA decision will be an embarrassment for Israel, which always invokes tenuous security reasons to suppress Palestinian sports.”