Abu Bakr al-Baghdadi, the leader of the Islamic State of Iraq and al-Sham, is seeking the mantle of founder Abu Musab al-Zarqawi with his bold attack on Iraq's second largest city. 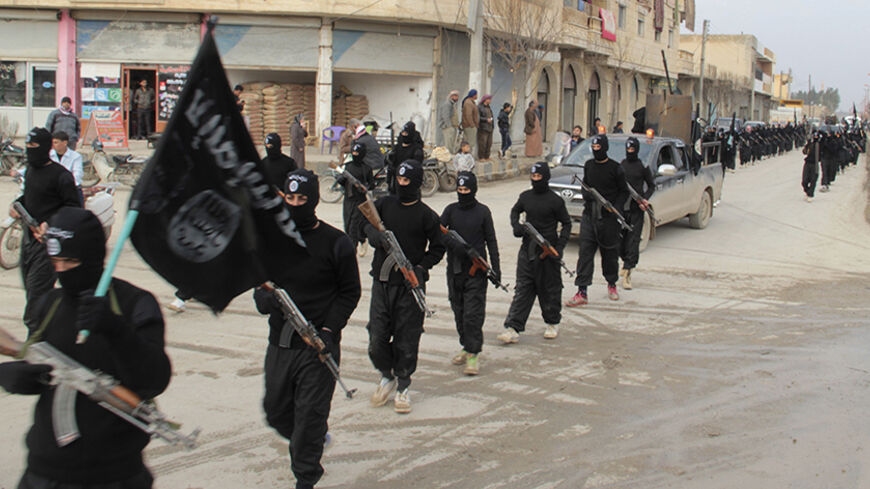 Fighters of the Islamic State of Iraq and al-Sham carry their weapons during a parade at the Syrian town of Tel Abyad, near the border with Turkey, Jan. 2, 2014. - REUTERS/Yaser Al-Khodor

The ghost of Abu Musab al-Zarqawi, the founder of what is today the Islamic State of Iraq and al-Sham (ISIS) has become the next generation of "al-Qaedism" — more violent, ruthless and extreme than any of its predecessors. ISIS made a bold gamble for its stunning victory in Mosul, taking both a historic great city and symbolic leadership of the global jihad.

Zarqawi, a nom de guerre, was the Jordanian gangster who created al-Qaeda in Iraq, the base from which ISIS evolved, to fight the US invasion. He started from scratch in 2002 even before the invasion began, since then-President George W. Bush made his plans known well in advance of the war. Zarqawi set a trap and built cells ready to strike after the invasion. Then Zarqawi plunged the country into civil war and through his extreme violence persuaded most of Washington that the war was a bad mistake. Although he died in 2006, his legacy survives.

Late al-Qaeda leader Osama bin Laden was always suspicious of his Jordanian protege even before Sept. 11, 2001, and sought to keep him at arm's length. Bin Laden exiled Zarqawi for a time to western Afghanistan because he distrusted Zarqawi's loyalty and his extreme sectarian violence against Iraq's Shiites. But he valued Zarqawi's efficiency once the Iraq war started.

The Bush surge in 2007 did not destroy Zarqawi's empire. A residual US ground force would not have eliminated it, either. Decapitating the group and buying the Sunni tribes only forced it deeper into the angry Sunni underground. Only sustained good and smart governance could kill it, and that was something post-Saddam Hussein Iraq could not produce, with or without the United States.

The Syrian civil war was a gift to ISIS. At first, ISIS created Jabhat al-Nusra as its agent in Iraq that could be portrayed as an independent party under one of Zarqawi's former deputies, Mohammad al-Golani. Then, ISIS demanded al-Nusra accept its loyalty to ISIS leader Abu Bakr al-Baghdadi and not bin Laden's successor, Ayman al-Zawahri. The protege had turned on his leader's heir. Ironically, Zawahri had long warned bin Laden of this eventuality. In his last days, bin Laden told Zawahri he had always been right about the upstart Jordanian. Too late.

Baghdadi, another nom de guerre, is an ambitious man. He has successfully cloaked himself in mystery. He avoids the posturing and spotlight-seeking that Zarqawi craved to his undoing. He dismisses the old al-Qaeda leadership as not willing to push sectarian hatred far enough. His supporters have been calling for Baghdadi to be accepted as the true heir to bin Laden as the leader of the global jihad.

Before taking Iraq's second largest city this week, ISIS had already seized most of Anbar province in Iraq and Raqqa province in Syria. There, it enforces a Taliban-style extreme version of Islam. Mosul represents a much bigger price, an ancient city with great symbolic value. ISIS is effectively creating a stronghold across the Syrian desert in the heart of the Arab world, erasing the borders set a century ago by the British and French after the fall of the Ottomans.

Baghdadi, like Zarqawi, has bigger ambitions. Last month, the Saudis foiled a major ISIS plot to carry out attacks in the kingdom, arresting dozens. ISIS has recruited thousands of foreign fighters to fight in Syria, and some are reportedly being trained to go home to fight in their native lands. ISIS probably trained the French Muslim who attacked the Jewish Museum in Brussels and killed four in May.

Taking Mosul could expose ISIS to counterattack by the larger US-equipped Iraqi army backed by Iran. It may provoke the Kurds, too. It's a gamble. For Baghdadi, it is an audacious move to outshine his mentor.