Hamas is relieved to be free of the burden of government, and is eager to repair the damage with the Palestinian street. 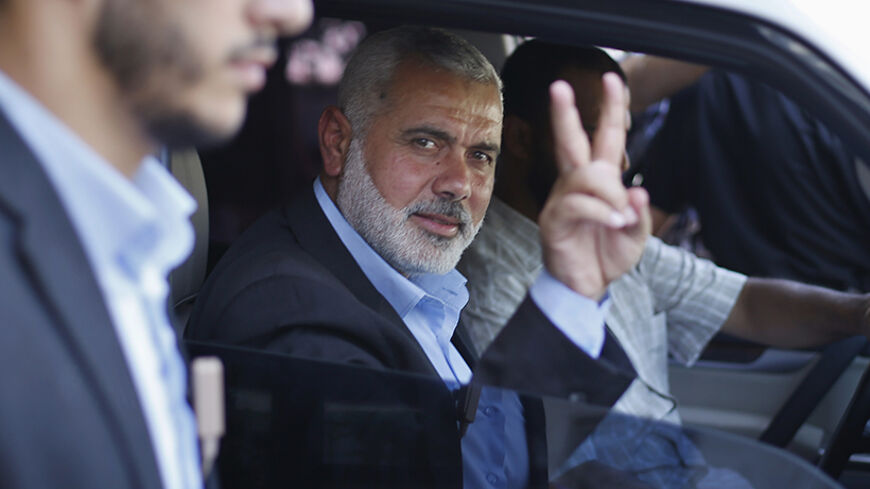 Senior Hamas leader Ismail Haniyeh gestures in Gaza City as he leaves his office after stepping down as prime minister of the Hamas government, June 2, 2014. - REUTERS/Suhaib Salem

It seems that the upcoming days will be busy in terms of decision-making within Hamas, following its withdrawal from governing after the reconciliation. It will now devote itself to the challenges of the next stage and repair the damage done to it in previous years.

Hamas’ popularity has been going up and down since it came to power in 2006. These fluctuations came as a result of its failure to meet many of the demands of Palestinians in the Gaza Strip, in light of the blockade imposed by Israel and Egypt and the cutting of state employees' salaries.

Nevertheless, the Palestinian Center for Policy and Survey Research said that, based on a poll from late March, Hamas’ overall popularity was declining.

A Hamas official in Gaza, who spoke on condition of anonymity, told Al-Monitor, “Hamas realizes that the mood of the public has been affected by the difficult reality — as the economic hardship has continued for many years now — [of] the conflict between Hamas and Fatah in Gaza, and what the misleading media has said against Hamas. These reasons led to a shift in the public opinion, [with] other parties gaining preference and a decline in the popularity [of Hamas]. This requires Hamas to develop a comprehensive media, charitable, public and social program in the next stage, to ensure the continuation of communication with the public.”

Ahmed Yousef, a former adviser to Hamas leader Ismail Haniyeh, was the boldest, offering an assessment of Hamas’ performance just before its leaders left government. He asked, “Did Hamas leaders take the initiative to walk in disguise in the markets or the streets of the camps to hear the pain of the people? Did its ministers approach UNRWA food aid distribution centers to observe the rush of defeated Palestinians to receive a bag of flour? Did they live with the youth of Gaza, where life has become meaningless with the lack of jobs?”

As Hamas leaves office, it has begun to revive the discourse of resistance and armed struggle against Israel.

The loudest voice regarding the resistance came from Hamas leader Khaled Meshaal, when on May 20 he threatened Israel with “liberating the West Bank just as Gaza was liberated,” noting that “Hamas is pursuing Israel in its strongest bastions.”

Yahya Moussa, head of the Legislative Council's Oversight Committee, told Al-Monitor, “Hamas opted for reconciliation in an attempt to revive the resistance project in a strategic manner. Hamas is concerned with the struggle on the ground and needs national consensus so as to avoid any confrontation with the PA in the West Bank.”

Al-Monitor asked the anonymous Hamas official if this meant that Hamas would resume its military escalation against Israel immediately after its withdrawal from the government. “Hamas was able to gain huge popularity thanks to the resistance, which made a lot of sacrifices and boosted its popularity, even though this popularity has declined in recent years because the movement failed to meet the everyday demands of the masses. Yet, the two wars in which Hamas was engaged in Gaza in 2008 and 2012 lifted its popularity to unprecedented levels.”

This was confirmed by a poll conducted by the Jerusalem Media and Communication Center (JMCC) after the war ended in 2012, which saw a jump in public approval ratings of 10% for Hamas.

Both Meshaal and Haniyeh, who stepped down as leader of Hamas' government June 2 in Gaza, have stressed that the “reconciliation with Fatah is not a substitute for the resistance.”

Hamas has become convinced that it was freed of any governmental obligations courtesy of the reconciliation, and thus any confrontation with Israel would not be met by a comprehensive punishment for Palestinians. Hamas needs to escalate the resistance to repair the damage that has been inflicted on its popularity in recent years.

These convictions began to make inroads in the repeated talk about the need for the liberation of prisoners from Israeli jails, the escalation of resistance in the West Bank and the statements of Fathi Hamad, the minister of interior and national security of the Hamas government. Hamad said, “The doctrine of the security services in the next government should not back down from protecting the resistance, calling on the factions to continue to hit Israel until liberation."

Hamas also has its eyes on the upcoming legislative elections, as declared by Mousa Abu Marzouk, deputy head of the movement’s political bureau, in an interview with Al-Monitor.

According to Mohsen Saleh, head of al-Zaytouna Centre for Studies and Consultations, “Hamas is facing a dilemma in the upcoming elections. Should the movement win, it will have to carry the burden of managing the government as before. In case it does not win, it will lose its popular legitimacy, hand over [control of] Gaza and become an opposing minority. If it disrupts the elections, the movement will suffer from the blockade on Gaza, lose its popularity and be accused of disrupting the reconciliation.”

However, the administrator of charity in Gaza told Al-Monitor, “Should Hamas wish to run for the elections, it has to increase the services provided to Palestinians, such as the distribution of aid to the needy, communicating with the public instead of shunning it and to lead public activities.”

“Hamas’ financial crisis will hinder it from assuming its responsibilities toward voters, which will affect its popularity. It has to regain its popularity through its affiliated service associations to run for the elections. It has great obligations toward the different segments of society, especially the poor,” he added.

Al-Monitor spoke to a member of the Hamas Electoral Committee who said, “The upcoming phase will witness severe electoral competitions. Hamas is required to state facts to the public and refrain from adopting the policy of desperate defense to justify its errors, taking into consideration the occupation and the blockade.”

Despite Hamas’ fears of its declining popularity in Gaza, the number of registered voters in the West Bank amounted to 1,090,575, while in Gaza they numbered 770,636, according to the Central Election Commission. Thus, Hamas hopes to gain more votes in the West Bank, as a way to offset any potential losses in Gaza.

A Hamas official told Al-Monitor, “These figures show that Fatah’s popularity is adversely affected by the PA’s behavior, which would tip the balance in favor of Hamas by allowing it to gather more votes from the West Bank.”