Senate Foreign Relations Committee Chairman Robert Menendez, D-N.J., tells Al-Monitor that he wants to look at "all the facts" as the House and Senate schedule hearings this month on Iran's compliance with its nuclear obligations. 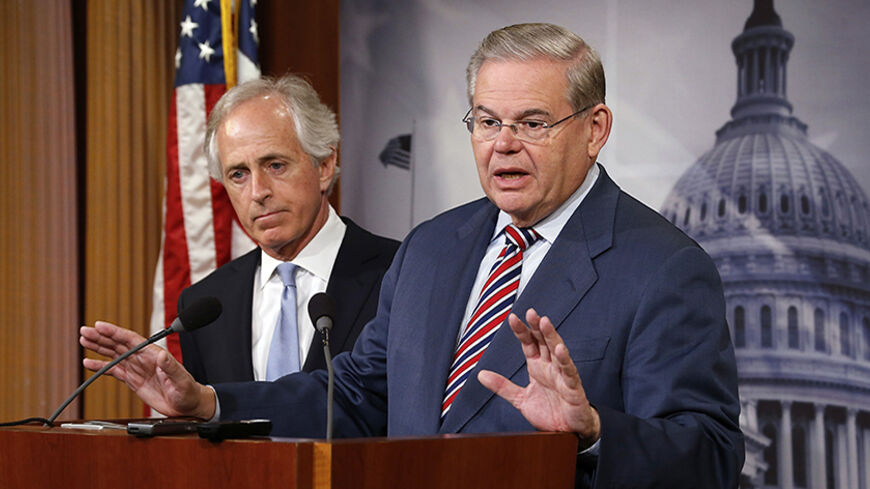 Congressional action on Iran is heating up again as the July 20 deadline for a final nuclear deal between Iran and world powers fast approaches.

The leaders of the House Foreign Affairs and Senate Foreign Relations Committees said June 4 they will hold hearings on Iran's compliance with its nuclear obligations ahead of the July 20 deadline.

Meanwhile, activists on both sides of the issue are ramping up their outreach to Congress.

"We'll be looking at an Iran hearing in the near future," Senate Foreign Relations Chairman Robert Menendez, D-N.J., told Al-Monitor in a hallway interview.

The goal, he said, will be "getting an update as to what is happening and also, from my perspective, looking at what happens the day after an agreement, is something that no one's really paying attention to. And I'll be looking forward to having that type of hearing."

The first hearing, scheduled for June 10, will be dedicated to "verifying Iran's nuclear compliance."

"Given Iran’s long record of deception, any nuclear agreement in which we cannot completely verify compliance would be an open invitation for Tehran to continue its secret nuclear weapons program, forcing the world to live with the permanent threat of a nuclear-armed Iran," Royce said in a statement. "At this hearing, the Committee will examine, with top national security experts, the requirements that would be needed for the United States and international inspectors to comprehensively verify Iran’s compliance with its nuclear commitments."

The hearing comes amid growing signs that lawmakers are fast running out of patience and may seek to rekindle sanctions legislation that has been stalled in the Senate since December.

The sanctions bill, sponsored by Menendez and Sen. Mark Kirk, R-Ill., garnered its 60th supporter when Sen. John Walsh, D-Mont., signed on at the end of April. Walsh replaced Max Baucus, now the US ambassador to China, in February and faces a tough election fight in the red state.

And the pro-Israel lobby AIPAC, which backed off calls for an immediate vote on the legislation back in February, has been bombarding supporters in recent weeks with funding requests tied to the Iran deadline. And the legislative agenda section of its website lists passage of the Menendez-Kirk bill as a top legislative priority.

"With the July 20 deadline approaching for the P5+1 and Iran to reach a nuclear deal, it is vital that we urge Congress to maintain its historic oversight role and insist that any final agreement prohibits Iran’s capacity to develop a nuclear weapon," AIPAC said in a fundraising pitch last week.

Iran's reported oil-for-goods barter deal with Russia has also added to the congressional push to tighten the screws on sanctions.

"If this sanctions-busting scheme moves forward, it would present a clear violation of Iran’s obligations and would undermine the rationale behind the current negotiations," Royce wrote in a letter to Secretary of State John Kerry earlier this week. "Consequently, any illegal barter deal between Iran and Russia must be met with a compelling response."

Advocates of a negotiated settlement are pushing back. On June 2, the National Iranian American Council (NIAC) launched a "Seal the Deal" lobbying campaign that NIAC says is aimed at stopping "warmongers in Congress" from sabotaging diplomatic negotiations.

"Frankly, we just don't have time for … Congressional timidity — and that's why we're launching the Seal the Deal campaign, to lock down diplomacy by July 20," NIAC said in a June 2 email to supporters. "In these next 8 weeks, we need YOU to tell your Senator and Representative to take a public stance in favor of a diplomatic deal with Iran."

Deal advocates say most of the witnesses have been skeptical of the negotiations, but that the record of Iran's compliance with the November interim agreement, which only went into effect Jan. 20, has been well-documented. Iran is on track to convert low-enriched uranium gas into an oxide form less suitable for making nuclear bombs this month, according to Reuters, and IAEA reports have found Iran to be abiding by all the other requirements of the interim deal.

"Not a balanced panel, but if focus is on compliance then the record shows Iran and US are both doing well," tweeted Jon Wolfsthal, deputy director of the James Martin Center for Nonproliferation Studies (CNS) at the Monterey Institute of International Studies and a former adviser to Vice President Joe Biden.

The hearings come amid signs that international negotiators are struggling to close the deal, in part due to disagreements over the centrifuge capabilities that Iran will be allowed to retain in a final agreement, Laura Rozen reported in Al-Monitor on June 1. The administration, however, insists it intends to try to stick to the July 20 timeline.

"The United States is not signaling that we are prepared to extend the Iran nuclear negotiations, period,” State Department spokeswoman Marie Harf told Al-Monitor on June 2. “We are working toward the July 20th date, and we believe we can meet that date.”

In any event, Menendez indicated that an extension may not fly with Congress.

"We'll have to look at all the facts at that time," he told Al-Monitor.