Iraq is Turkey's second leading export market, but trade routes to Baghdad and farther south are currently blocked because of ISIS's capture of Iraqi territory. 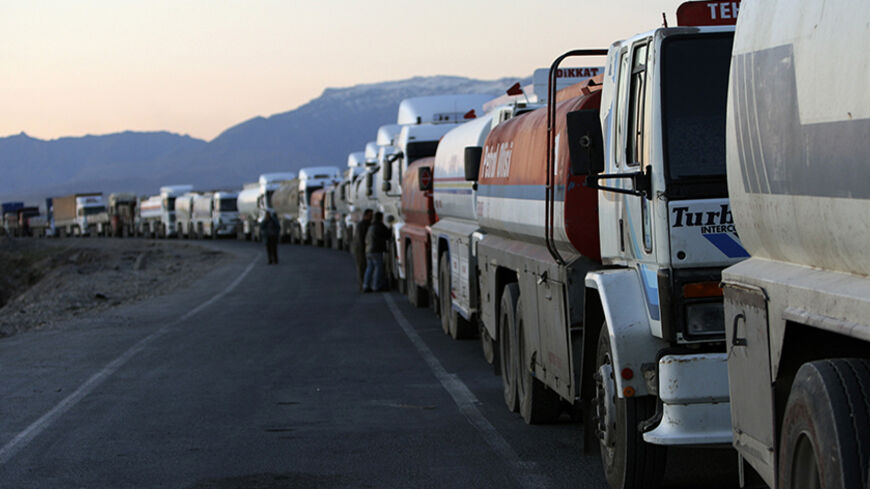 Turkish trucks and tankers, shuttling between Turkey and Iraq, queue on a road leading to the Habur border gate in southeastern Turkey, before crossing into Iraq with their goods, Feb. 23, 2008. - REUTERS/Fatih Saribas

Iraq is Turkey's potentially most lucrative market in the world. According to data from the Assembly of Exporters, Germany and Iraq occupy the top two slots for consumption of Turkish imports. Last year, Turkey's exports to Germany totaled $13.3 billion, while those to Iraq amounted to $11.9 billion.

It is misleading, however, to look only at export figures. One must also keep an eye on imports. In 2013, Turkey imported $24.1 billion in goods from Germany — that is, twice the amount Turkey sold in Germany. Regarding Iraq, however, Turkey sold $11.9 billion in goods and bought only $200 million. This is why figures point to Iraq as being Turkey's potentially most lucrative and rapidly developing market.

According to the Statistical Institute of Turkey, in 2004 the country's exports to Iraq stood at $1.8 billion, which means that in the last decade Turkish exports to that country increased 6.6 times. That exports in the first quarter of 2014 have already reached $4 billion clearly illlustrates the attractiveness of that market. There are, however, indications of a deterioration in relations in this enticing market because of issues involving oil shipments from Iraqi Kurdistan to Ceyhan in Turkey. Before that issue could be resolved, the Islamic State of Iraq and al-Sham (ISIS) occupied Mosul, delivering a blow to trade between two countries. That said, 65% of Turkish exports go to northern Iraq along a route, through Sulaimaniyah, where there are no troubles, so a sharp drop in exports there is not expected.

Cetin Nuhoglu, president of the International Transporters Association, said trucks from Turkey used to carry their freight to transshipment centers 50 kilometers (31 miles) inside Iraq, and from there the goods were sent on to Baghdad via Mosul and Samarra. “Commerce on that route has ceased. The only route open is via Sulaimaniyah,” he said. Nevaf Kilic, president of the Turkey-Iraq Industrialists and Businessmen Association, confirmed that trucks are now coming back to unload their cargo at their warehouses in Turkey.

After ISIS took control of Mosul and began advancing toward other towns, Turkey’s Foreign Ministry warned hundreds of Turkish companies and thousands of Turkish workers to leave Anbar, Baghdad, Basra, Diyala, Kirkuk, Mosul and Salahuddin. Two major Turkish banks closed their branches in Baghdad. As Turks began the evacuation, the fallout on commerce became alarming. More than 1,500 Turkish companies operate throughout Iraq, and when some of them hastily closed their offices after ISIS went on the attack, more than 2,000 trucks headed to Iraq had to turn back.

The surrender of Iraqi towns to ISIS also hit the Turkish markets. The Istanbul stock exchange had climbed to 81,600 points on June 10. After ISIS occupied Mosul, within four days, the index fell to 77,646, a 4,000-point loss. Foreign exchange parity rose, while interest rates and oil prices rose. The worst effect has been the added burden to Turkey’s energy bill.

Minister of Economy Nihat Zeybekci thinks, however, that Mosul will not adversely affect Turkey. In a statement to the daily Milliyet, he said there were no problems in places such as Sulaimaniyah and Erbil, and that events in Mosul were therefore unlikely to have any negative bearing on Turkish exports.

Parts of Zeybekci’s surprising statement also appeared accepting of a fragmentation of Iraq. He said, “Borders that were drawn superficially 60 years ago will be re-demarcated. Parts of the region will find their right places. There is so much diversity, with Arabs, Sunnis, Shiites, Turkmen and Kurds. Then there are plenty of radical groups. They all want to have a say. The region is so sick that all germs freely attack it.”

Although Zeybekci seems relaxed about the current situation, exporters are not. Serif Ercument Aksoy, chairman of the Turkey-Iraq Business Council of the Foreign Economic Relations Council, said unless ISIS is pushed back, it will be difficult to reach Baghdad and southern Iraq. He noted that shipments to the south via Dubai will increase costs. Sahin Batalli of the Union of Exporters of Grains and Legumes said the shipment of goods to Iraq from Gaziantep has already stopped. Annual exports from Gaziantep to Iraq had totaled some $1.5 billion.

The problems Turkey faces are not easily surmountable in trying to find solutions to reductions in exports, lowering the current account deficit, stabilizing the foreign exchange rate and reducing interest. Surely, however, part of the solution requires decreasing tensions between Ankara and Baghdad and developing solidarity against the threat posed by ISIS to the interests of both countries.

The general sentiment of the Turkish government appears to differ from Zeybekci's take on Iraq. Mehmet Ali Sahin, a prominent member of the Justice and Development Party's brain trust and its deputy chairman, said, "We defend Iraq’s territorial integrity. Our interlocutor is the Baghdad government. It is not possible for us to recognize anyone else as the legitimate government there.” Sahin's assertion could be interpreted as an indication that Ankara and Baghdad could soon find common ground in a joint struggle against ISIS.

Taner Yildiz, Turkey's minister of energy, whose position is key in relations between the two countries, has also drawn attention to Iraq’s territorial integrity. He said, “Oil shipment from northern Iraq is continuing. This is Iraq’s oil. As always, Turkey respects Iraq’s political integrity. Turkey pays the utmost attention to Iraq’s territorial integrity and sharing of its revenue as determined by the people of Iraq.”

To sum up, Iraq’s northern region remains accessible to Turkish exports, but the routes to Baghdad and farther south are blocked for the time being. The barrier created by ISIS's actions must be removed for exports to resume to the south. In the meantime, there are unsettling predictions that if the ISIS advance continues, it might well trigger mass migrations to Turkey. No one has yet begun to calculate what such a wave, following on the heels of the influx of refugees from Syria, will cost Turkey.